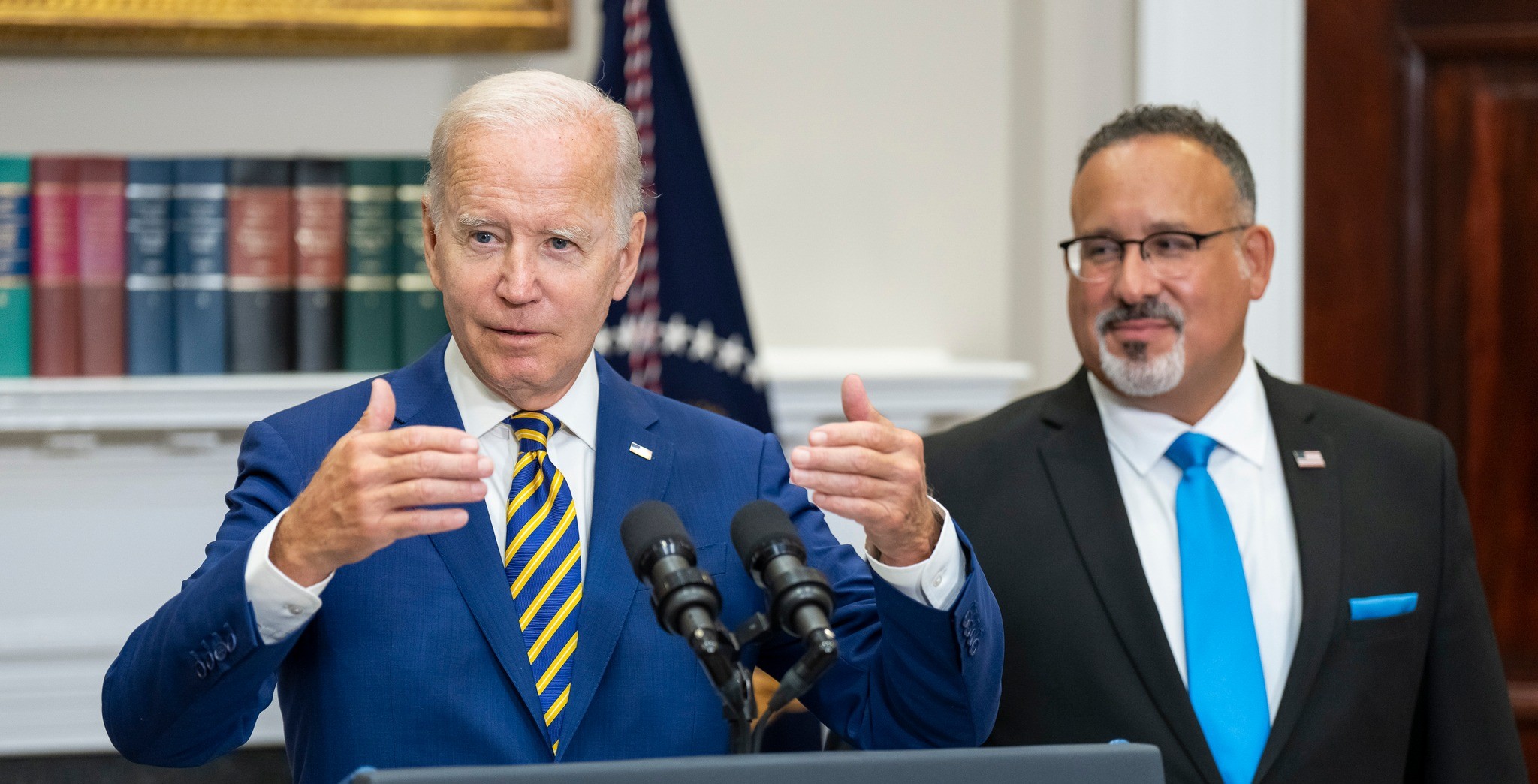 “Now that the Student Loan Debt Relief application is open, spot the scams,” says an Oct. 18 Federal Trade Commission alert. “Scammers are … trying to get your money and personal information,” it warns.

Judging from the midterm results, the promised payoffs helped stem a GOP wave. Other forces, obviously, also were in play — not least a slew of weak, Trump-aligned candidates.

Judge Pittman, based in Fort Worth, Texas, held that the debt cancellation plan amounts to “an unconstitutional exercise of Congress’s legislative power,” and vacated the plan.

Donald Trump has become GOP kryptonite, sapping Republicans of the power to win elections — which will continue until the party sidelines him and his bogus stolen election claims.

That said, appointing excellent judges who follow the rule of law and the Constitution stands as one of the former president’s great accomplishments.

Judge Pittman appears to be one such appointment — as his lucid, meticulously reasoned 26-page opinion demonstrates.

Before reaching the merits, Judge Pittman determined that the plaintiffs met the threshold requirement of legal standing — the hurdle that has tripped up other challenges to the debt cancellation plan.

To establish standing, a litigant must show a “concrete and particularized” legal injury from the allegedly unlawful act, law, or policy. A “generalized grievance” isn’t enough.

For example, though millions of Americans are outraged that the loan cancellation program would stiff taxpayers to the tune of hundreds of billions, the Supreme Court has consistently ruled (e.g., Hein v. Freedom from Religion Foundation) that taxpayers’ grievances over spending programs do not constitute a cognizable injury for standing purposes.

That’s why a Wisconsin taxpayer group’s legal challenge to the plan was bounced out of court last month.

In the case before Judge Pittman, which was backed by the Job Creators Network Foundation, legal standing derives from the plaintiffs’ inability to offer comments and suggestions regarding the debt forgiveness program.

Plaintiff Myra Brown wants the government to cancel her commercially held student loan, but the program limits eligibility to borrowers with government loans.

(For some context, recall that Barack Obama had the government take over most of the student loan business, leaving behind a smaller though still sizeable number of borrowers with commercially held loans).

As the complaint explains, the Education Department never provided notice or an opportunity for public comment — as required under the Administrative Procedure Act (APA).

Judge Pitman found standing not because he is “lawless” — as Liz Warren claims; or an “extremist” — as Ayanna Pressley (of Congress’ “squad” of anti-American Marxists) insists; but rather because under Fifth Circuit precedent, “a plaintiff can show a cognizable injury if [she] has been deprived of a procedural right to protect [her] concrete interests” and “[a] violation of the APA’s notice-and-comment requirements is … a depravation of a procedural right” (Texas v. EEOC).

The 2003 law was passed to help students deployed in Iraq and Afghanistan avoid technical defaults by allowing the education secretary to waive administrative deadlines and the like.

Under section 1098bb(a)(1) of the HEROES Act, the education secretary “may waive or modify any statutory or regulatory provision applicable to the student loan financial assistance programs … as [he] deems necessary in connection with a war or other military operation or national emergency.”

The key section is 1098bb(a)(2). It says that the secretary may “waive and modify [such provisions] as may be necessary to ensure that … affected individuals are not placed in a worse position financially in relation to [student loans] because of their status as affected individuals.”

An “affected individual” means someone in active military service — as well as anyone “employed in an area declared a disaster area” due to a national emergency. Therefore, the administration argues, all student loan borrowers in the U.S. (plus “all five permanently populated United States territories” to boot!) are “affected person[s]” since the whole nation has been deemed a disaster area due to COVID-19.

Joe Biden’s policies certainly are disastrous, but calling the entire country a “disaster area” seems like a stretch.

And remember that in September the president told a certain Democrat news show that the pandemic was over — even while keeping the COVID-19 disaster declaration for political purposes.

Even assuming for the sake of argument that the government’s never-ending national emergency declaration implicates the education secretary’s powers under the HEROES Act, those powers do not include canceling student debt. (READ MORE: Student Loan Forgiveness With Other People’s Money)

If Congress wanted the education secretary to have that power, it could have written it into the statute. “Enabling legislation like the Heroes Act is not an open book to which the agency may add pages and change the plot line,” Judge Pittman observes, citing Supreme Court precedent.

Moreover, under the “major questions doctrine,” the Supreme Court “presume[s] that Congress intends to make major policy decisions itself, [and] not leave those decisions to agencies” — unless the agency can “point to clear congressional authorization for the power it claims” (West Virginia v. Environmental Protection Agency).

This includes Ohio Rep. Tim Ryan, who lost the state’s Senate race to J.D. Vance. (He was one of the only Trump-aligned candidates to actually win a high-profile race).

Speaking on the House floor in 2003, he called the HEROES Act a good “first step,” but said additional legislation was needed to allow the Education Department to waive accumulated interest on payments missed by students deployed overseas.

The HEROES sponsors understood that the act didn’t authorize a waiver of accumulated interest for deployed service members who miss payments, but Democrats want Americans to believe that it authorizes the wholesale cancellation of hundreds of billions of dollars of underlying principal.

Incidentally, Texas Rep. Shelia Jackson Lee also spoke in support of the HEROES Act because it would “drastically reduce the likelihood that enlisted men’s and women’s educations will be jeopardized by inadvertent, technical violations or defaults.”

As the Congressional Research Service notes, it’s not even clear that the HEROES Act authorizes the repeated extensions of the student loan payment moratorium provided in the CARES Act. (CARES only suspended payments through Sept. 30, 2020.)

In “major questions doctrine” cases, the Supreme Court has said that Congress “does not hide elephants in mouseholes.” Here, it may be more like hiding blue whales in conch shells.

Judge Pittman’s ruling isn’t the plan’s only setback. In a separate legal challenge brought by a coalition of Republican-run states, the Court of Appeals for the Eight Circuit issued a preliminary injunction on Nov. 14.

If not for that Court’s Oct. 21 ruling granting an emergency motion to prohibit debt discharges, the administration would already have canceled large amounts of debt in violation of the Constitution.

The state plaintiffs are Nebraska, Missouri, Arkansas, Iowa, Kansas, and South Carolina. The White House has been trashing their GOP officials since the lawsuit was filed. In truth, they deserve the thanks and gratitude of the American people.

On Friday, the administration asked the Supreme Court to vacate the Eighth Circuit ruling — a day after asking the Fifth Circuit Court of Appeals to block Judge Pittman’s decision. Both courts should rule soon.

Too bad Vegas doesn’t take action on litigation outcomes. Depending on the odds, one could make real money betting against the administration — and its obnoxious student loan scam.

Ken Sondik is an attorney in Zionsville, Indiana. Reach him at kensondik@gmail.com.