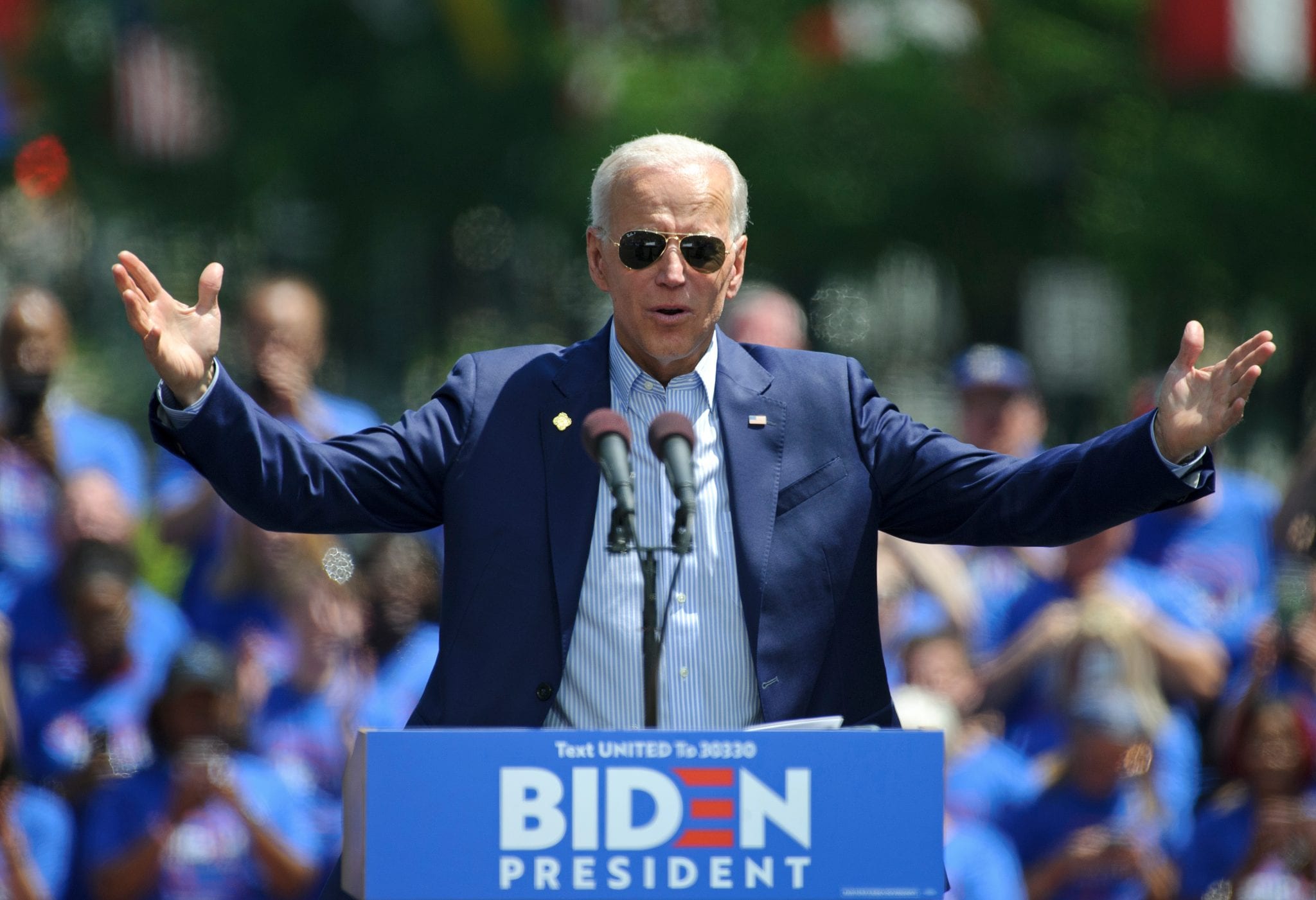 Joe Biden, the crazy uncle that many people try to hide in the attic, so to speak, is a “good guy,” even if he didn’t have enough backbone to defend his use of that phrase to describe Vice President Mike Pence. When the left-wing mobs came calling, Uncle Joe scurried for the exit.

Of course, the former senator already had run from his record in the Anita Hill hearings, during which he apparently privately acknowledged the inconsistencies of her story. Now, seeking the Democratic presidential nomination in an era when truth and consequences are of no account, he apologized for not arming the anti-Clarence Thomas mob with pitchforks and torches.

His latest craven surrender is on abortion funding.

Uncle Joe’s principle strength is his longevity. He comes from an era before the Democratic Party had turned into a left-wing hothouse. The party always included a lot of big spenders, but on culture and foreign policy many Democrats were to the right of many Republicans. Across America’s heartland many Democrats supported gun rights and opposed abortion.

Indeed, the Hyde Amendment, which prohibits public funding of abortion except when the mother’s life is in danger and in cases of rape and incest, was first passed in 1976 by a Democratic House and Senate. Democratic President Jimmy Carter, elected in that year, defending the prohibition. Belief in the eternal value of the human person was not limited to the right.

In 1980 Democrats purported to be the party of diversity and tolerance when they attacked the Reagan campaign for creating an abortion “litmus test” for judicial nominees. To be sure, most Dems backed the 1973 ruling in Roe v. Wade, but they said they would never, ever impose that belief on judicial nominees.

By the late 1980s and 1990s fealty to the principle of unlimited abortion was becoming a requirement for Democratic presidential nominees — which was a problem because so many leading Democrats had unclean hands, from the Left’s perspective. As a result, Richard Gephardt, Al Gore, and Bill Clinton all tossed aside measured records on the issue in their campaign for the top political prize. Still, the latter felt the need to claim he wanted the procedure to be “rare” as well as safe and legal. Scores of congressional Democrats continued to vote pro-life.

However, over the years the two parties increasingly divided along abortion. Ironically, as the usual suspects among the media and commentariat denounced the GOP for its alleged intolerance in becoming more uniformly pro-life, Democratic orthodoxy largely extirpated any public role for pro-life Democrats. Two years ago Democratic National Committee Chairman Tom Perez declared: “Every Democrat, like every American, should support a woman’s right to make her own choices about her body and her health.” He added: “That is not negotiable and should not change city by city or state by state.” There is simply no room for individual conscience: “we must speak up for this principle as loudly as ever and with one voice.”

Only a few congressional Democrats show hints of reluctance to take the abortion-uber-alles pledge. Today there are Senators Joe Manchin and Bob Casey and Representatives Henry Cuellar, Collin Peterson, and Dan Lipinski. The latter, perhaps the most conservative Dem in Congress, has become quite a problem for the intolerant Left. Bernie Sanders is supporting Lipinski’s primary opponent, who almost unseated Lipinski two years ago. Under pressure Rep. Cheri Bustos, head of the Democratic Congressional Campaign Committee, canceled a fundraiser for the incumbent. At the time she claimed to still support a “big tent Democratic caucus,” but opined: “I’m proud to have a 100 percent pro-choice voting record and I’m deeply alarmed by the rapidly escalating attacks on women’s access to reproductive care in several states.”

Now comes Uncle Joe, who when he arrived in Washington in 1973 said that Roe was wrongly decided. (In fact, the decision wasn’t really even constitutional law, as some liberal legal scholars admitted.) His votes against abortion funding go back more than 40 years. Over the years he followed his ambitious Democratic brethren into the pro-Roe camp, but in 2007 still described his position on abortion as “middle of the road.” And up until last week he supported the Hyde Amendment.

That measure should be considered unexceptional, yet it generates untold hysteria. The thought that there is anything anywhere which Washington does not subsidize sends the average left-winger into hysterics. The knowledge that government is not paying to abort babies is treated as uniquely offensive. The “right” to have an abortion apparently includes the “right” to make others pay for it. It bears repeating that the Hyde Amendment blocks no one from getting an abortion. It merely says that if you want to eliminate your baby, you can’t conscript taxpayers to pay. The responsibility is yours alone.

Naturally, Biden’s at best vestigial commitment to past principles — he long ago made it very clear that he does not believe the unborn warrant the slightest legal protection — generated a tsunami of criticism. It seems as if every declared, undeclared, and still thinking about it Democratic candidate announced his or her determination to make every American pay. Washington Post columnist Karen Tumulty declared that Biden “is a man out of step with his party” and the breach is “potentially irreconcilable.”

That’s about all that was needed for Uncle Joe to discover his inner abortion crusader. He explained: “Women’s rights and health care are under assault in a way that seeks to roll back every step of progress we’ve made over the last 50 years. If I believe health care is a right, as I do, I can no longer support an amendment that makes that right dependent on someone’s zip code.”

Which is, well, complete nonsense. Abortion is not simply a matter of “health care.” There is another life at stake. And 40-plus years is a bit long to take before noticing that refusing to fund abortion, like anything else, means it is easier for rich people than poor people to afford. The best one can say about Uncle Joe is that he is a slow learner. Who knows what other brilliant insights he might come up with as the campaign proceeds?

Alas, the better explanation is that he is a craven opportunist, afraid that taking even the most modest of principled stands will cost him too many votes. So now, after decades of declaring that taxpayers should not be forced to underwrite a procedure many view as the equivalent of murder, he says, never mind. Protecting his left flank matters more.

Maybe his shameless flip-flop will pay off. More likely, he will find that he has sacrificed the very raison d’être of his candidacy.

The original case for Uncle Joe was that he represented an older, better rooted, and more centered liberalism. Human beings mattered more than ideology. Social engineering was not politics’ highest virtue. Even as liberalism trended left it retained a few of its classical characteristics.

But now we find Uncle Joe joining the braying left-wing mob, apparently prepared to toss aside all the traditional verities in which he once believed. If the “new” Joe Biden hopes to look like an ideological carbon copy of his opponents, however, why should anyone vote for him? Does anyone really want as president a frankly aged, slightly addled, often goofy, and ostentatiously unprincipled lifetime politician who never has said or done anything particularly interesting or worthwhile? If Biden has become just another man of the Left, why not vote for the real thing, a genuine socialist and gender warrior determined to force the socially unenlightened to kowtow to liberal totems?

Uncle Joe still seems like a “good guy,” but he no longer possesses even the pretense of principle. In the short-term his reversal on abortion might help insulate him from his opponents’ attacks. In the long-term it is likely to sap support from those who no longer see anything that sets him apart from his younger, brighter, tougher, and more vigorous opponents.

Doug Bandow
Follow Their Stories:
View More
Doug Bandow is a Senior Fellow at the Cato Institute.
Most Popular
1
Crime Time
New York Attorney General Letitia James Must Resign — and Be Prosecuted for Abuse of Power
by Jeffrey Lord