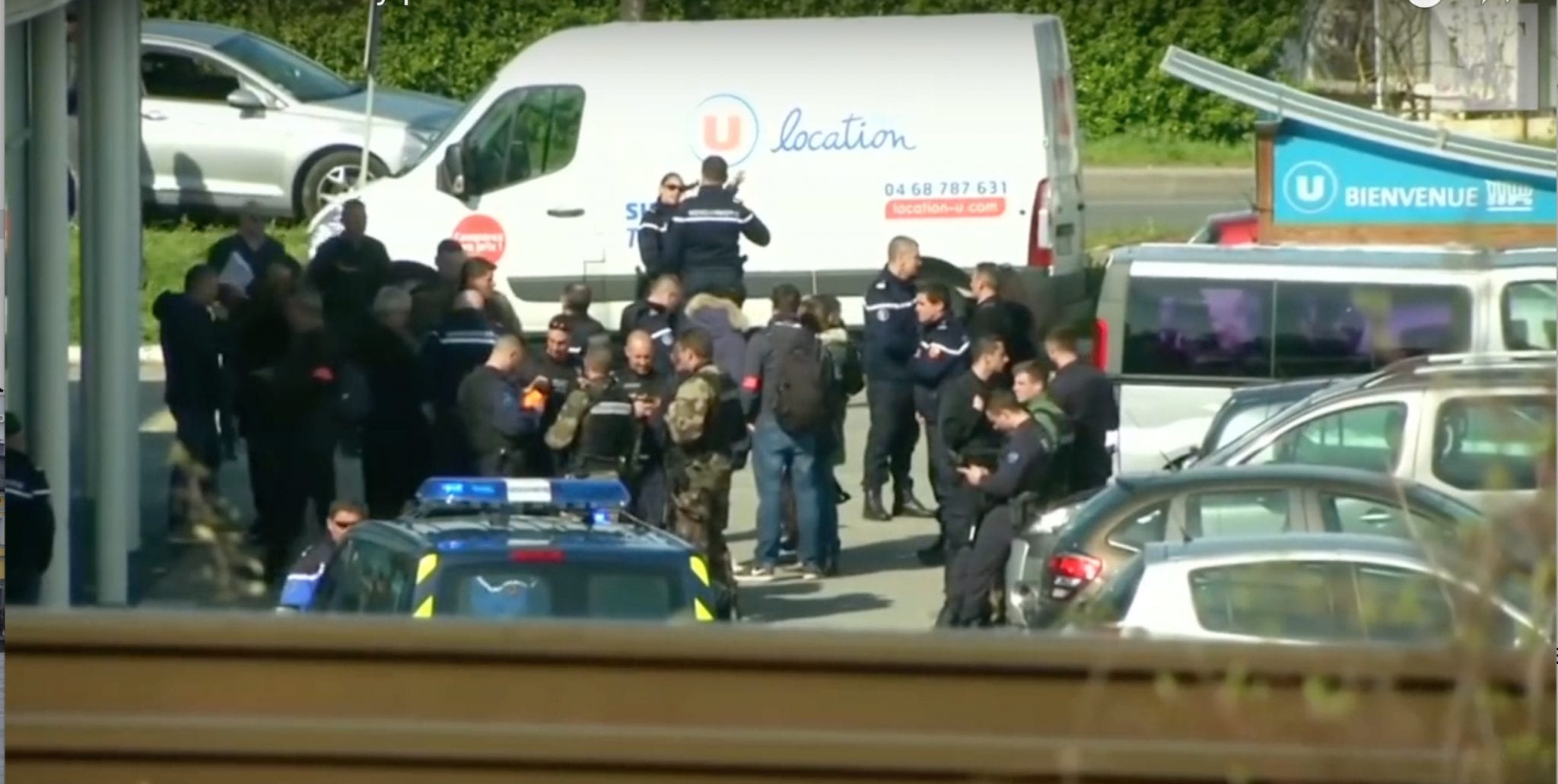 Almost simultaneous to Islamist terror attacks in the Audes (a county in France’s southwest), a pair of jihad-intoxicated men killed an elderly woman in Paris. Her funeral today is marked by a silent demonstration of Parisians led by the mayor, Anne Hidalgo. Outpourings in response to terror attacks have become almost regular events in the French capital.

According to Pierre Rigoulot and André Senik, the response of public officials has been mixed. In a press release sent out after the attacks in the Audes, on the letterhead of their research organization, the Institute for Social History, they warned against a reluctance to confront a determined enemy. Originally established as a think tank on communist totalitarianism, the Institute has been active in research and discussion on Islam and the Islamist threat in France and beyond:

The attacks in the Carcassonne region have been correctly denounced by [French President] Emmanuel Macron: “Our country has been attacked by Islamist extremism.”

Unfortunately, most leading political figures are reluctant to call the enemy by his proper name, and hesitate to point to the ideologies that nurture his hatred: Islamism, in its jihadist and salafist branches. Rare exceptions must be noted: [former Socialist Interior Minister and presidential candidate] Manuel Valls and [National Front leader and presidential candidate] Marine Le Pen.

The first attack occurred March 23, when a terrorist hijacked a car near Carcassonne, killing the driver and wounding the passenger. He shot and wounded police officers and drove the vehicle to Trebes, a nearby village, where he attacked a grocery store, killing two.

Arnaud Beltram, a lieutenant-colonel in the gendarmerie (a branch of the Army) unit that was at the scene, volunteered to serve as a hostage in exchange for the one the attacker was holding and was murdered during a standoff with security forces. In the ensuing shoot-out the killer, identified as 26-year old Moroccan immigrant Redouane Lakdi, was shot and killed.

Three days later, 85-year-old Mireille Knoll was stabbed repeatedly and left on fire in her burning apartment by two intruders who have since been arrested and charged with murder with suspicion of deliberate anti-Semitic intent, an aggravating charge under France’s anti-hate laws.

The neighborhood on the east side of Paris and the Carcassonne region in France’s south have had Jewish populations since records exist; in recent years, both have been the scenes of Islamist attacks and murders. Soldiers, Jews, policemen have been favored but by no means exclusive targets.

After noting that the political class has been slow to respond to these attacks, Rigoulot and Senik continue:

Little has been heard [on these crimes] from the Muslim community, [but] the dean of the Lyon mosque Kabel Kabtane, denounced the “hateful and cowardly” murder of Lt. Col. Arnaud Beltram, a deed that, again, puts an entire community to shame.

The imam of a mosque in Carcassonne, the Rigoulot-Senik statement continues, also denounced the crime that, he said, is decidedly contrary to Islamic teaching.

For his part, the president of Algeria, Abdelaziz Bouteflika, expressed his “deep indignation” in a message to his French homologue, and stated:

Algeria vigorously condemns this cowardly crime that unfortunately comes to remind the entire international community that the scourge of terrorism requires a global response and solidarity under the auspices of the United Nations.

The sacrifice of Arnaud Beltram was also saluted by President Donald Trump, who made the point of calling him a hero and noting that Islamic State claimed the terrorist as one of its own.

The lieutenant-colonel was a graduate of St-Cyr (France’s West Point); he served in Iraq in 2005-07.

Aptly, in the wake of the horrible murder of an aged lady who had escaped a Nazi roundup as a child, Rigoulot and Sendik continue:

Islam is no sanctuary, safe from outside intervention on spurious church-state grounds. On the contrary, religions that take positions on public affairs must be regarded as driven by political ideas and must be made responsible for the hatred they espouse and encourage, notably toward women and Jews.

They continue: “To be accepted in France, Muslims must follow and support the laws of the Republic and denounce and expel any who would impose their sharia on our country.”

In one grim sense, the latest attacks in France verify that, if the West has forgot the Battle of Poitiers, the Orient has not. In modern times, France confronted Islamism avant la lettre as it fought the Algerian national movement in the 1950s and ’60s; Algeria itself, in a contortion not untypical of the permanent crisis of Islam, fought a savage war of peace of its own against Islamist extremists in the 1990s — or was it at war with itself?

Questions remain open on the persistence of gallantry and honor and sacrifice in a nation whose soldiers are to a degree a caste, or a brotherhood, apart from those whom they serve and protect. And French Jews, among the oldest of France’s many subcultures and fully prominent in the mainstream one, cannot but worry if, once again, the French state will fail them.