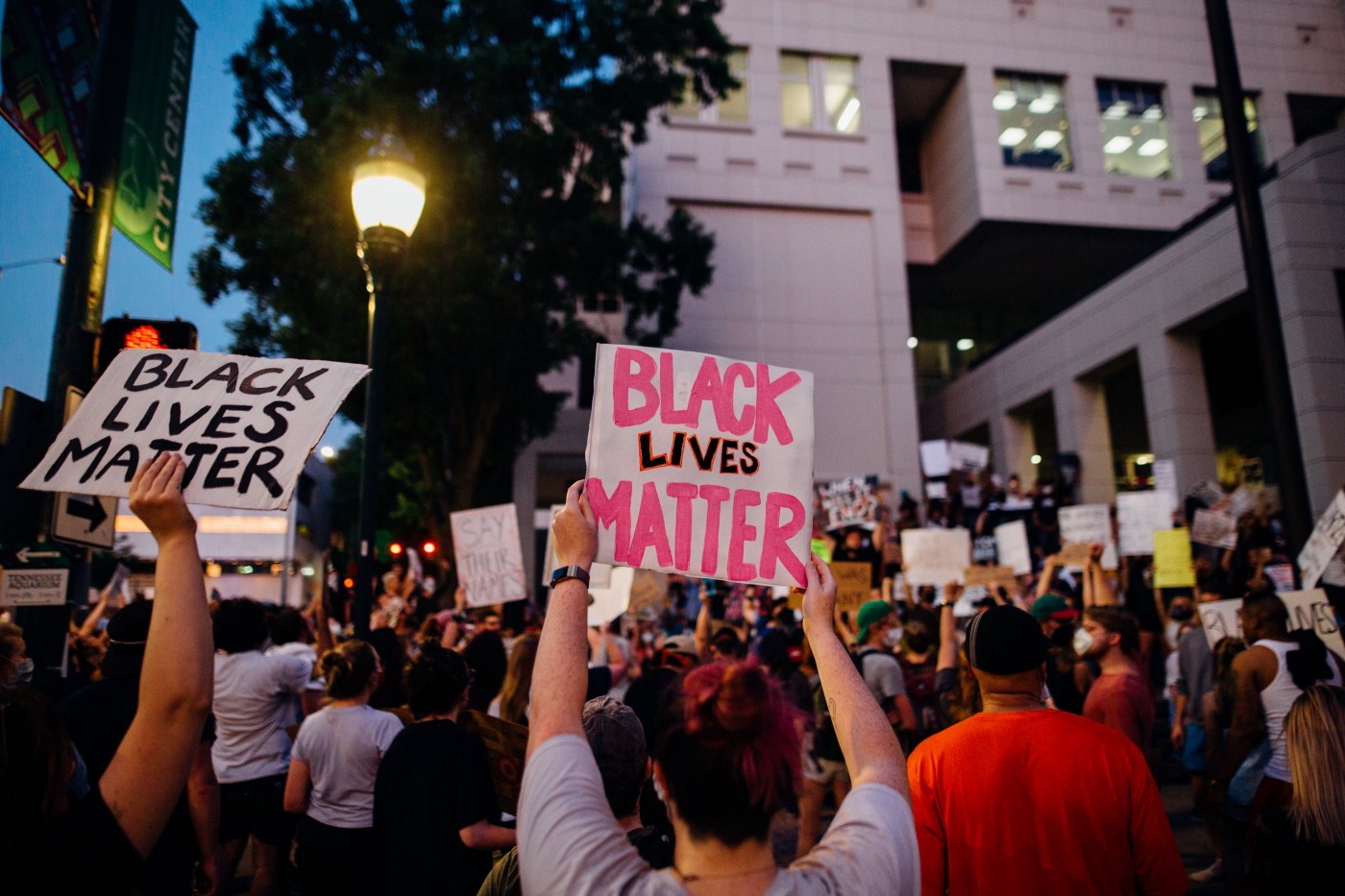 On August 28, strange bedfellows, comprised of over 600 Jewish mainstream organizations and synagogues along with anti-Zionist Jewish groups and grouplets, published a full-page ad in the New York Times under the title “We Speak with One Voice When We Say, Unequivocally: Black Lives Matter.” The incoherent and inaccurate document — virtually everything it said about BLM was wrong — speaks volumes about the sad state of the American Jewish community, whose motto is apparently filmmaker Federico Fellini’s adage: “Don’t tell me what I’m doing; I don’t want to know.”

To dispose first of the ad’s identification of BLM as “the current day Civil Rights movement in this country … our best chance at equity and justice.” The goal of the original civil rights movement could be summed up in Martin Luther King Jr.’s words: “I have a dream that my four little children will one day live in a nation where they will not be judged by the color of their skin but by the content of their character.” On the contrary, Black Lives Matter wants whites to be judged solely by the color of their skin — which supposedly ineradicably brands them as privileged racists. Only black lives matter (note the fury unleashed on anyone who dares to declare that all lives matter) and then only the tiny sliver of black lives taken by whites, above all white policemen. In the large number of ordinary black lives taken by black criminals BLM displays a blank disinterest.

Swept up in the fashionable moral panic following George Floyd’s death, in a mad rush to show their superior virtue, Jews stampeded onto the Black Lives Matter bandwagon, heedless of where they were headed.

The Times ad also compares the “conspiracy theories” used by “white supremacists” in the past, including billboards “smearing Dr. Martin Luther King Jr. as a communist” to politicians currently “deliberately manufacturing fear” of BLM. But BLM makes no secret of its anti-capitalist fervor. It was founded in 2013 by three black women: Patrisse Cullors, Alicia Garza, and Opal Tometi. In 2015, Cullors stated on video, “We actually do have an ideological frame. Myself and Alicia [Garza] in particular, we’re trained organizers. We are trained Marxists.” Garza openly reveres Joanne Chesimard (who now calls herself Assata Shakur), the Marxist revolutionary, former Black Panther and convicted killer of a New Jersey state trooper. For the past 41 years Shakur has been a fugitive sheltered by Communist Cuba. As for the third of the trio, Opal Tometi, she also referred to Shakur as “dear exiled sister” at a 2015 People of African Descent leadership summit where she is shown with Nicholas Maduro’s arm around her.

But the most bizarre feature of the Times ad, given that it was signed by a slew of organizations opposed to attacks on Jews and strongly supportive of Israel, from the Conservative and Reform movements to a host of Jewish community relations councils and individual synagogues to the Anti-Defamation League, is its take on Black Lives Matter and anti-Semitism.

It’s not that the Jewish organizations signing the ad were unaware of Black Lives Matter’s hostility to their core concerns — that, in Caroline Glick’s words, “Hatred of Israel and the Jews is part of its DNA.” In 2016, Black Lives Matter issued “policy platforms.” One supported the BDS (boycott, divest, and sanction) movement against Israel, described Israel as an “apartheid state,” and declared the U.S., because of its alliance with Israel, “complicit in the genocide taking place against the Palestinian people.” Along with the naked lie of genocide, Black Lives Matter singled out Israel alone of foreign countries for attack. Its assault included each of the three “D”s Natan Sharansky has identified as signs that “anti-Zionism” is simply a mask for old plain vanilla anti-Semitism: “demonization, delegitimation, and double standards” applied to the Jewish state. Jewish organizations across the board duly protested BLM’s platform, from the Anti-Defamation League to the far-left T’ruah (the Rabbinic Call for Human Rights).

So how does the ad deal with this issue? It claims the fault lies with “politicians” who deliberately “divide us against each other. All too often, anti-Semitism is at the center of these manufactured divisions.” The formulation is so muddy it’s helpful that “Bend the Arc,” one of the radical groups behind the ad, has provided clarification. According to Bend the Arc, the text of the ad originated as a letter “coordinated by a diverse group of Jewish activists who saw emerging attempts among some politicians and media outlets to drive a wedge between Jews and black-led movements along with efforts to delegitimize black-led movements by using anti-Semitic conspiracy theories.” In other words, the notion that BLM is anti-Semitic is an anti-Semitic conspiracy theory! In this remarkable sleight of hand, presumably a villainous Trump (since the solidly Democratic Jewish signatories to the ad are unlikely to have Obama or Biden in mind) is responsible for BLM’s being falsely accused of anti-Semitism in an attempt to divide Jews from blacks.

As to the absurdity of this, let me count the ways. BLM’s policy statement attacking Israel was issued six months before Trump took office. The New York Times ad identifies as a canard accusations that the first civil rights movement was masterminded by “communist Jews” and affirms that Black Lives Matter is “led by and for Black people.” How can it then be the puppet of nefarious white politicians who make BLM behave as if it were anti-Semitic when it is not? (A new policy statement is in the works, and the 10-page summary makes no mention of Israel. BLM spokespeople refuse to say if the final document will refer to Israel, but whether it does or not, the prominent role outspoken Farrakhan supporters and haters of Israel have in the movement ensures that the attacks on Jews and Israel will continue.)

Regardless of policy statements, BLM makes its anti-Semitism all too obvious. During the June 30 Los Angeles riots, the Fairfax community, with a large Orthodox Jewish population, was targeted. Most Jewish businesses were looted. In an article on what happened, Daniel Greenfield quotes a local Chabad rabbi, Shimon Raichik, saying, “It’s Kristallnacht all over again.” Anti-Semitic graffiti was scrawled across five Orthodox synagogues and three religious schools. On Congregation Beth El the message was spray painted “F*** Israel” and “Free Palestine.” Allyson Taylor, a founder of the pro-Israel Stand With Us, reported chants of “F*** the police and kill the Jews” and called the experience “insane and very, very scary.”

So how does one explain the unqualified Jewish support for Black Lives Matter manifest in the New York Times ad? The far-left organizers were themselves surprised. Although published as an ad in the Times at the end of August, the letter had been composed in June. According to Audrey Sasson, the executive director of Jews for Racial and Economic Justice, 400 Jewish organizations signed on in the first 48 hours. Dove Kent of Bend the Arc said, “I was shocked that we didn’t get one edit request from an institution. It showed how committed people in this moment are to supporting Black liberation.”

What it really shows is the total failure of Jewish leadership. Swept up in the fashionable moral panic following George Floyd’s death, in a mad rush to show their superior virtue, Jews stampeded onto the Black Lives Matter bandwagon, heedless of where they were headed. Greenfield quotes a resident of the Fairfax community with more sense than the lot of them: “A community that teaches … that standing up for Israel and for their own homes and synagogues has to take a back seat to black nationalism, has no future.”