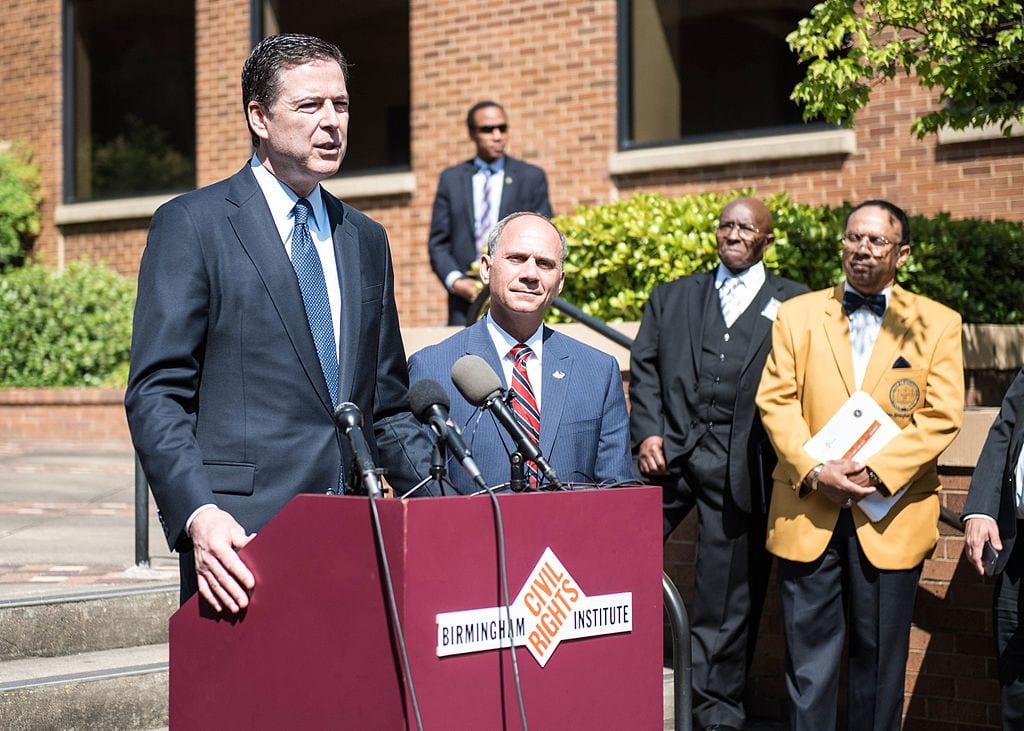 On the available evidence, it’s tempting to conclude that academe can’t get any goofier. Can’t sink any lower. But don’t ever say it. “Higher” education’s search for the bottom is apparently endless. Read on and be amazed.

I don’t open the Wall Street Journal of a morning primarily for laughs. (Good thing, eh?) But there was a major knee-slapper in Tuesday’s edition. The howler appears on, of all places, the Journal’s editorial page, normally a staid, laugh-free zone. We learn there that this autumn the discredited (in the minds of most people paying attention) James Comey will teach a class in “ethical leadership” at the College of William & Mary in Virginia.

That’s right. Please don’t adjust your computer. I’m not making this up. (If you doubt me, and I admit I’m mounting a serious challenge to credulity here, I refer you to page A16 of Tuesday’s Journal.) James Comey, the slight-of-hand careerist whose legal reasoning is so tortuous that trying to follow it would give a snake a backache, will apparently be infecting young minds with his opportunistic approach to massaging the law in favor of the home team and calling it ethical (those with even a modest grip on the difference between right and wrong call it something else).

As long as W&M is offering counter-intuitive pairings of teacher and subject, there’s a world of possible follow-ons. My sources in Williamsburg tell me the college is giving serious consideration to a course on “ethical investment” to be taught by Bernie Madoff. This to be followed by a course on “ethical sexual behavior in the work place” to be taught by Harvey Weinstein. Of course there’s the seminar on humility to be co-directed by Bill O’Reilly and Reggie Jackson. (This one will certainly have its moments. But with these two instructors, students should not expect to be able to get a word in edgewise.) Course materials are not yet complete for a seminar entitled The Buck Stops Here, to be led by Hillary Clinton, but I’m sure it will be fascinating.

Speaking of tortuous and self-serving, Comey released the following statement with the news of his entry into professorship (be sitting down for this): “Ethical leaders lead by seeing above the short term, above the urgent or the partisan, and with a higher loyalty to lasting values, most importantly to the truth.”

Wow. This is so oily I may have to have the carpets cleaned. Comey’s maudlin, saccharine, (supply your own adjectives here) bromide blast will produce in most sentient readers either the gag response or a belly laugh, depending on whether said reader takes the tragic or the comic view of life. In my case I’m still experiencing after-shocks of giggling.

Comey seems to be taking a page from Humpty Dumpty, who, you’ll recall, said, “When I use a word, it means just what I choose it to mean — neither more nor less.” Substitute “law” for “word,” and you have the legal gospel according to James Comey. A quick review of Comey’s career would lead us to believe that the “lasting value” most cherished by Comey is, well, his own career. And there’s hardly a material, natural or man-made, more elastic than Comey’s working concept of “the truth.”

I always enjoyed that old sports gag: “A score just in on that Harvard, William & Mary game. The final was Harvard 21, William 10, Mary 7.” If William and Mary were still alive today, they would both gag.