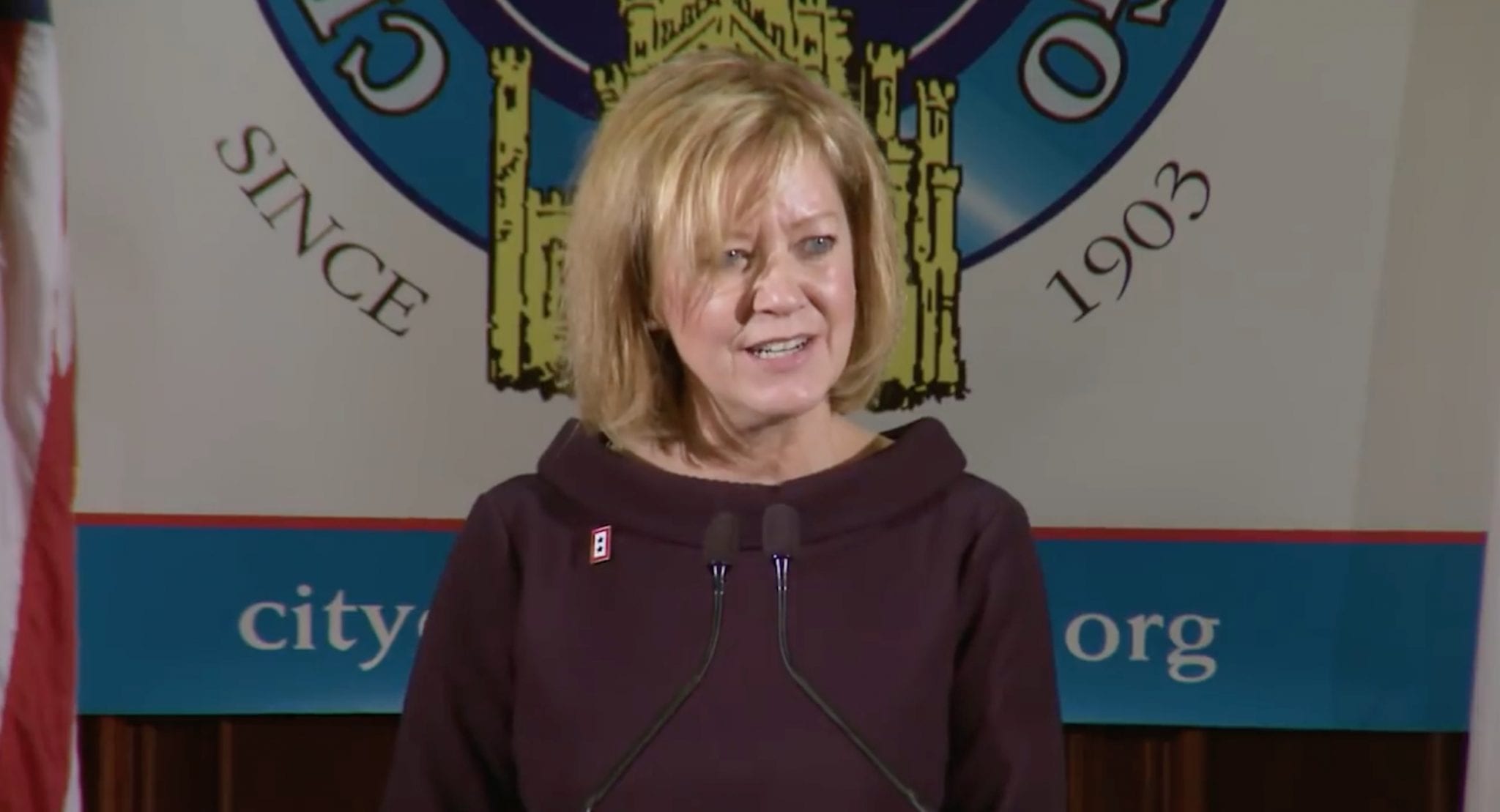 Illinois voters take to the polls on Tuesday to elect the Democratic and Republican nominees for governor.

Although incumbent Gov. Bruce Rauner, a Republican, is seeking re-election, he is facing stiff competition from within his own party. She comes in the shape of Jeanne Ives, a three-term state representative from Wheaton. Despite jumping into the race only five months ago, Ives has drawn attention from the right wing of the GOP for her socially conservative beliefs, bleeding out the millions Rauner has raised for the campaign.

“Rauner has been a complete failure,” Ives recently told The American Spectator. “I’d do everything differently. I know my policy. I would build my coalitions. I would not give up making arguments to the people that influence the decision.”

In the most recent poll released at the end of February by the Paul Simon Public Policy Institute at Southern Illinois University at Carbondale, Ives was down 20 points to Rauner, 31 percent to 51 percent with 18 percent undecided or favoring someone else. Compared to mid-January polling from We Ask America, which had a 65-21 difference, Ives appears to be on the rise. According to NBC’s Chicago affiliate, recent internal polling from Ives says there is a seven point spread between the contenders.

Since the end of January, “this campaign has exploded,” Ives said.

Rauner appears to feel the burn from Ives. Last week, he vetoed bipartisan gun reform legislation and his campaign invested in a new television advertisement campaign, adding to the more than $16 million he has spent on TV ads for the primary. Meanwhile, Ives has spent $2.4 million, according to Politico.

Incredibly, the longshot candidate with almost no clear legislative accomplishments to her name has gone from being a no-name representative to being “too conservative” for Illinois, according to the Democratic Governors Association. In contrast, National Review named Rauner the “worst governor in America.”

Illinois’ economy is in disrepair. It has the slowest rate of household income growth in the country, low numbers of participation in the workforce, and some of the highest taxes in America. The state’s credit rating has sunk, and Illinois has the most underfunded pension liabilities of all states. Manufacturing businesses have fled, but it is not just jobs that are leaving. People are, too. Every year since 2014, the year Rauner was elected, Illinois has lost population.

The worst affront for many Illinois conservatives, however, came in September. Rauner signed into law House Bill 40, which allows taxpayer dollars to fund abortions, breaking a publicly made promise and earning him the title “Benedict Rauner” from the Chicago Sun-Times.

About six months ago, though, Ives did not even have the governorship in her eyesight. She said although she has disagreed with Rauner on his leadership style and many of decisions, it was not until he signed into law House Bill 40, which allows taxpayer dollars to fund abortions, that made her think about entering the race.

Ives said Rauner’s action represented poor policy, but also was a betrayal. It abandoned his party’s values and showed unfaithfulness to his promises of vetoing the bill, she said.

“He lied to us,” Ives said. “That’s a major character flaw from someone who is supposed to be on our side of the aisle. He is unelectable in 2018, so that’s why he needs to be taken out in the primary.”

Name recognition is her biggest obstacle, Ives said. A debate between Rauner and Ives in the Chicago Tribune began to change the tide, she said. Since then, she has gained national attention for controversial comments about members of the LGBT community as well as a commercial, which has been criticized by members of both parties, depicting a transgender woman, Women’s March participant, teachers’ union member, and illegal immigrant.

Still, Ives is not afraid to criticize Rauner’s support for Illinois as a sanctuary state and the “junk science on transgender issues.”

“The liberal progressive agenda on social ideas is alive and well in the state of Illinois, but they’ve done just about everything they can do at this point,” she said.

Ives, the daughter of a self-employed insurance salesman and home economics teacher, is a native of South Dakota. The Remmes family lived in the small farming town of Vermillion, where Ives attended high school with her cousins and worked alongside them on her uncles’ farms during the summers. She credited those experiences with where she learned hard work.

“I think it’s very typical of that era, where you start your paper route at age 8, and you’re always doing something, and your parents kept you in activities and kept you working,” Ives said. “You knew there was a lot of personal responsibility that was expected.”

As a result, Ives developed a commitment to service. The only one of her five siblings to follow in the footsteps of her grandfather, uncles, and father, Ives enlisted in the military. Attracted by the Army’s desire for individuals strong in academics, athletics, and leadership, she enrolled at the United States Military Academy in New York.

“I like a challenge,” Ives said. “I felt like it was a place that would challenge me and put me on a path with a variety of different things in my life.”

Serving as an officer from 1987-1993, Ives spent some time in Soviet-split Germany. There, she experienced the tearing down of the Berlin Wall in 1989, in the wake of the Reagan presidency.

“It was the fruition of somebody setting out a policy goal, and that being achieved by actually putting the policy in place,” Ives said. “You saw what can happen with the right leadership.”

While at West Point, Ives worked closely on a platoon one summer with Paul, who eventually became her husband. He left the Army prior to her, finding work in Wheaton. His wife followed, opting for assignment with the Reserve Officers’ Training Corps at Wheaton College in the early 1990s.

Today’s Illinois tells a different story. In 2017, the Prairie State lost almost 34,000 residents, the largest population decline of any state.

“My sister does real estate in South Dakota,” Ives said. “A couple from Illinois came up to look at homes and bought one that same day. They couldn’t afford their property taxes in Illinois, and they needed an affordable place for their kids to go to college.”

Illinois has the second highest property tax in the country at 2.32 percent, behind New Jersey with 2.40 percent, according to personal finance website WalletHub. Ives said, as governor, she hopes to decrease property taxes and cap them to better compete with Midwest neighbor states.

“That is how much the tide has changed in Illinois,” Ives said. “We came here for opportunities, and now people are fleeing the state of Illinois for opportunities elsewhere. That’s why I am running for governor.”

Describing herself as naturally inquisitive, Ives said she became involved in politics in the first place because people were not asking the right questions. Attending a Wheaton City Council meeting concerning a tax issue, Ives said she realized just how closed off her local government seemed to be to discussion.

“Everything seemed like it had been a done deal before the meeting started,” she said. “I thought there were a bunch of unanswered questions.”

So she ran for office. Her goal, she said, became to defend the members of her community, citing a time when she worked to prevent a tax increase from going into effect.

“I ran for the taxpayers,” Ives said. “I figured out quickly that the taxpayers are the ones without a lobbyist at every single level of government.”

That service did not go unnoticed. When a state representative seat became vacant after redistricting, Ives was asked to run. Although hesitant at first, Ives said a negotiation with a local union made her realize that to make an impact on her state, she needed to go the capital.

Ives marked herself as a rebel from the get-go. Not knowing candidates traditionally requested permission to run for office, Ives entered the race, but she won anyway and took office in 2013.

Ives said being in the minority, she has not been able to pass any major piece of legislation. Nonetheless, Ives said people listen to her. She said she is proud that she often speaks on the floor to share her views, defeat several bad bills, and highlight corruption, including identifying 55 property tax assessors unqualified for the position.

But Ives said she is tired of lawmakers ignoring taxpayers and bowing down to the will of special interests. And she said she knows many Illinoisans are, too. In her campaign’s first four weeks, it collected nearly 16,000 signatures to get her name on the ballot, an effort she credited to a fed-up grassroots movement.

Nonetheless, the state government running for itself and not its people has lasted too long, making many fall into a fatalist trap, Ives said.

Ives credited this was the lack of leadership in the Land of the Lincoln, especially under the “pathetic” Rauner administration. She criticized him for his lack of knowledge on policy and his ineffective work toward changing it.

Instead, Ives said she is looking to reach out directly to her constituents in order to engage with them and reform Springfield’s operations.

“If you’re not going the results from your legislators, then you go down into their district, you hold a town hall, and you make them accountable to their voters until they come on board because they can’t defend the policies that are hurting Illinoisans either,” Ives said. “Nobody’s made the argument in front of voters for them to do the right thing.”

Ives promised she would. One of the biggest items on her list in pension reform. Funds for retired government employees are gobbling up Illinois’ revenue, and Fitch Ratings ranks Illinois as the worst state for pensions as a share of residents’ personal incomes. State pensions represent 28 percent of Illinois’ income.

Changes are not easy, however, Ives said. In her platform, she is seeking to amend the Illinois constitution to decrease pensions not already promised. Additionally, Ives would set up a 401K self-managed retirement plan for new hires and work to renegotiate pension obligations as many will be unable to be paid by the state without tax hikes.

“It’s drowning everything we have to do,” Ives said. “This state will be solvent, if we don’t address our pension issue.”

These economic issues are what this social conservative says unites all Illinoisans and why she believes she can win in the primary and general elections, despite President Donald Trump losing the state in 2016. Ives said while the Democrats are offering higher taxes and more spending and Rauner has shown that, too, is his policy, she believes the people of Illinois are done with the status quo and are looking for a fresh start.