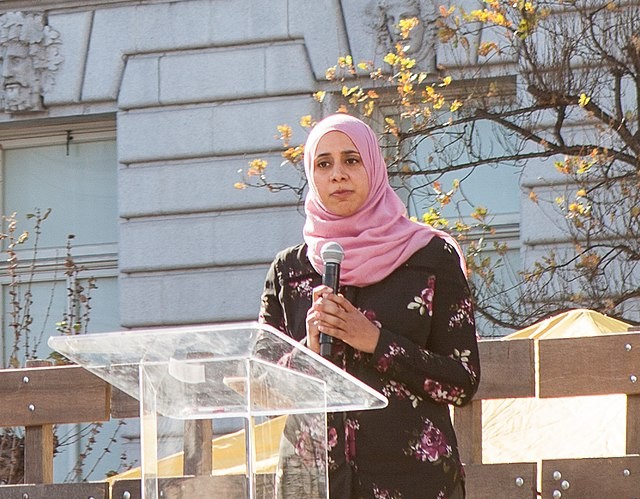 “If you are supporting our prisoners, you are supporting some of the best people on the planet,” stated Coalition for Civil Freedoms (CCF) prisoner and family support coordinator Nada Dibas during a recent webinar on “Ramadan Behind Bars.”

These “best people” — CCF’s clients — include terrorists in American prisons. Yet to Dibas and panelists like the Islamist, slavery-defending Georgetown University professor Jonathan Brown, they’re victims of America’s Islamophobia.

At CCF’s 2010 founding, the patriarch of the Al-Arian family, Brown’s father-in-law, Sami Al-Arian, lived with him while under house arrest after his conviction for providing material support to Palestinian Islamic Jihad terrorists. In 2015, the U.S. deported Al-Arian to Turkey after he pleaded guilty to supporting a terrorist organization.

CCF’s radical connections extend beyond the Brown family. Zahra Billoo, the Islamist executive director of the San Francisco chapter of the Council on American-Islamic Relations (CAIR), of which a federal judge found “ample evidence to establish” an association with Hamas, joined the panel. Islamist CCF members include CAIR’s Florida chapter, the Islamic Circle of North America, and the National Lawyers Guild, among others.

Given this radical crowd, Dibas’s claim that CCF supports “over 240 political prisoners” who are “predominately Muslim” is clearly propaganda. The federal government, she asserted, “targeted, criminally prosecuted, and imprisoned [these people] due to their political views, beliefs, cultural identity, or activism.” “We work with prisoners convicted of terrorism,” she added, while “most people don’t want to get near” this issue.

The following year in 2011, Nicholas Young traveled to Libya to fight for the overthrow of Muammar Gaddafi’s dictatorship, he told law enforcement. Additionally, the Counter Extremism Project noted, Young disclosed to FBI officers “that he tortured animals as a child, was a collector of Nazi memorabilia, and dressed up as ‘Jihadi John’ for a party.” Nicholas Young also expressed support for the January 2015 Charlie Hebdo massacre in Paris.

Yet in Ashley Young’s telling, brother Nicholas Young epitomized law enforcement’s use of entrapment and “completely manufactured” charges to victimize the innocent. Al-Qaeda’s 9/11 attacks produced “mass hysteria” and “keeping that fear alive” necessitated “politically motivated charges against people,” she said. “When the FBI couldn’t find the terrorists amongst us,” she added, “they started to invent them,” to which Dibas ludicrously responded, “anyone and everyone can be a target.”

Having established an atmosphere of faux innocence, Dibas introduced another panelist, the superficially friendly Ahmed Abdel Sattar, by noting that he had just ended a 20-year prison sentence. As the New York Post previously elaborated, Sattar “was an Islamist extremist who used his home as a communications hub to further the schemes of Sheik Omar Abdel Rahman, the blind Muslim cleric who masterminded the 1993 World Trade Center bombing.” Additionally, Sattar “and a co-conspirator in 2000 published a fatwa, or Islamic ruling, in Rahman’s name, calling for the killing of Jewish civilians.”

Rather than scrutinizing these obvious lies, Brown — more Islamist apologist than academic — gushed “it’s so inspiring” that Young is “really devoted” to her brother. Brown gladly accepted the veracity of CCF’s claims, just as he assumed the police brutality claims of the notoriously corrupt Black Lives Matter movement. In 2010, he did not believe that “police officers just randomly shoot black people for no reason,” he said, but BLM has since convinced him otherwise.

Given BLM’s supposed revelations of criminal justice corruption, “you really don’t have an excuse not to support CCF,” Brown said. Particularly today, “it’s so cool to be woke” and “talk about how the system is messed up,” he added, so supporting the likes of CCF means “you can use this to get street cred.” Therefore, “if you have any guts, then give money” to CCF, for otherwise “you are not a man, you are not a woman,” and “I am not impressed,” he quipped, with the additional personal note, “I respond well to shame.”

Brown pitched his support for CCF as a matter of solidarity, for “if someone gets in trouble or gets canceled,” then “as a matter of principle, I will not disassociate myself from that person.” “The system works by making that person toxic,” and therefore “you can’t let that happen,” he explained. The supreme irony, however, is that he works tirelessly to cancel “Islamophobes” like this author.

Dibas, Billoo, Young, Sattar, Brown, and their ilk are Islamist apologists masquerading as activists and scholars. Their opinions are therefore easily discounted, if not always rapidly dispatched. This whole lot and their supporting enterprises deserve anathematization, discrediting, and defunding.