In Search of Wisdom Democracy,Freedom,French Revolution,John Selden,Religion,Secularism Irreligious Intolerance - The American Spectator | USA News and Politics
Menu
In Search of Wisdom
Irreligious Intolerance
Leftism is as intolerant and more so than any of the older, religious traditions it winds up suppressing.
by Shmuel Klatzkin
The Interior of St. Patrick's Church, a Protestant cathedral in County Armagh, Northern Ireland. (Berto Ordieres/Shutterstock.com) 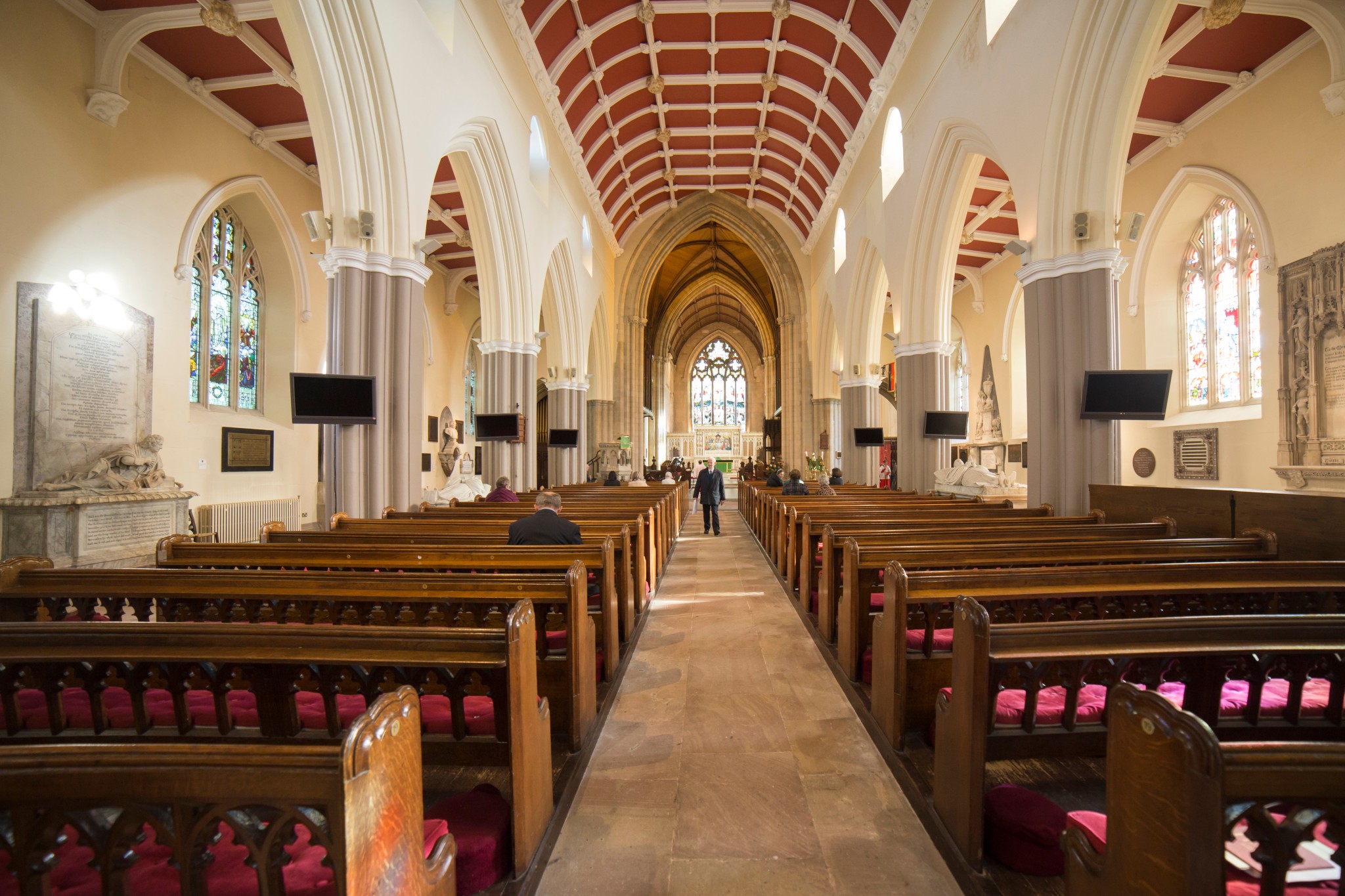 Democracy emerged in the West as a consequence of secularization. Religion lost its privileged position in human life, we embraced material science and secular philosophy, and democracy began to take hold. Religion is imperious, intolerant of answers other than its own. Democracy, championing freedom of speech and of religion, advances in exact proportion to how religion retreats.

Sound familiar? In one version or another, this story has been the standard view taught by generations of middle school and high school government and social studies teachers. It has been accepted as self-evident by progressive scholars for many, many decades.

Eric Nelson’s groundbreaking 2010 book, The Hebrew Republic, exposed how exactly wrong this commonplace has been. Nelson, professor of government at Harvard, shows from the sources how the main thrust of the 17th century political thinkers who laid the foundations for political freedom were largely motivated by that very same religious tradition that supposedly had to vacate the stage of public life for democracy to emerge. Nelson put it this way:

[In the late 16th and 17th century,] Christians began to regard the Hebrew Bible as a political constitution, designed by God himself for the children of Israel. They also came to see the full array of newly available rabbinic materials as authoritative guides to the institutions and practices of this perfect republic.

And they reasoned that the divine model would be superior to anything arising out of human theorizing. But how could a divine model for the whole world be found in the limited biblical texts simply setting out laws for a tiny nation in the ancient Middle East?

Rabbinic texts had not been widely studied in the Christian world. They range through many volumes of discussion, debate, and codification that develop the skeletal decrees of the Bible into a functioning law by governing the daily life of an actual nation.

But scholarship in Europe expanded its horizons. By the early 1600s, outstanding scholars such as Hugo Grotius and John Selden delved deeply into rabbinic law sources, looking to know more about the working of God’s law, the ideal law, and seeking clues there of how it could be imitated in human governments.

There, Selden, Grotius, and many others such as James Harrington and Thomas Hobbes discovered the Jewish law tradition of the Seven Noahide Laws that had direct relevance to everyone. Jewish teaching understands that God addressed all humanity with these basic laws which are pertinent to all peoples, such as: do not murder; do not eat a limb of a still-living animal; do not steal; harness and channel the human libido; and establish courts of law to ensure justice in our world.

Even the Noahide commandment against idolatry was understood in an extremely limited way, John Selden wrote. That law, like the other six, forbade only those expressions of idolatry that upset the basic civil order necessary to any society.

None of these laws mandated religious conformity.

Thomas Hobbes reflected on this and came to this conclusion, summarized by Nelson:

What is held in common by all these groundbreakers of democracy is that the divine law system based on the Bible is not opposed to religious freedom but rather mandates it.

How, then, did those who shaped our education get it so wrong?

There are several answers. Modern leftism, from the time of the French Revolution onwards, has been dismissive of religion. Leftists were entirely uninterested in the deep dive that Grotius, Selden, and their contemporaries took into Rabbinic literature — an exacting study.

More important, their narrative did not want to see an underlying unity in the religious tradition, but to portray it as primarily intolerant and narrow. Taking the worst of religion as the whole of it, they could portray themselves against this artificially dark background as the exclusive bearers of the light. If people would see Christian scholars immersed in rabbinic texts and arriving at political freedom, their narrative would be undercut. And so they buried this history.

We see the results of this suppression. Leftism triumphant tends quickly to suppress all dissent to its own dogmas, which constitute in everything but their own minds a new religion. And it is as intolerant and more so than any of the older traditions they wind up suppressing.

We need not dwell on the murderous horrors of the Communist states when we have our own home-grown version of intolerant leftist dogma. No dissent, for instance, is to be tolerated about the left’s sexual mores. For many years, ministers officiating at a wedding would ask if anyone there knew any reason why the couple should not be married and was prepared to halt the proceeding if there were, the religious fanatics of wokeism seek to imprison and reduce to penury someone who only asks that they not be forced to bake a cake for a wedding they believe is improper.

Conservatism understands that the great achievements of humanity are achieved through long effort, sometimes over countless generations. Political freedom is one of these great accomplishments. It is built on the biblical acknowledgment that human beings have been created in the divine image. As the late Rabbi Adin Steinsaltz taught:

Each individual soul is unique and special…. No two souls coincide in their actions, their functions, and their paths. No soul can take the place of another, and even the greatest of the great cannot fill the special role, the particular place, of another who may be the smallest of the small.… The life of a person is something that has no possible substitute or exchange; nothing and no one can take its place.

This insight was seen clearly by the courageous and creative thinkers who spearheaded democracy. They based it squarely in the religious tradition that they demonstrated was critically preserved by Judaism as a heritage for all humanity and was at one with the Bible as they read it as Christians.

Reject intolerant religion, whether it claims to uphold an old tradition or a new philosophy or even when it claims not to be a religion at all — merely the self-evident and indisputable truth. Treasure the amazing achievement of the past in establishing our political freedoms, and accept the need to protect it and tell its true story.