At Large,Top Story Politics Iran Will Strike Again - The American Spectator | USA News and Politics
Menu
At Large
Iran Will Strike Again
It has its own ways of interfering in the next U.S. election.
by Brandon J. Weichert
The guided-missile cruiser USS Cape St. George (CG 71) and the aircraft carrier USS Abraham Lincoln (CVN 72) transit the Strait of Hormuz (Wikimedia Commons) 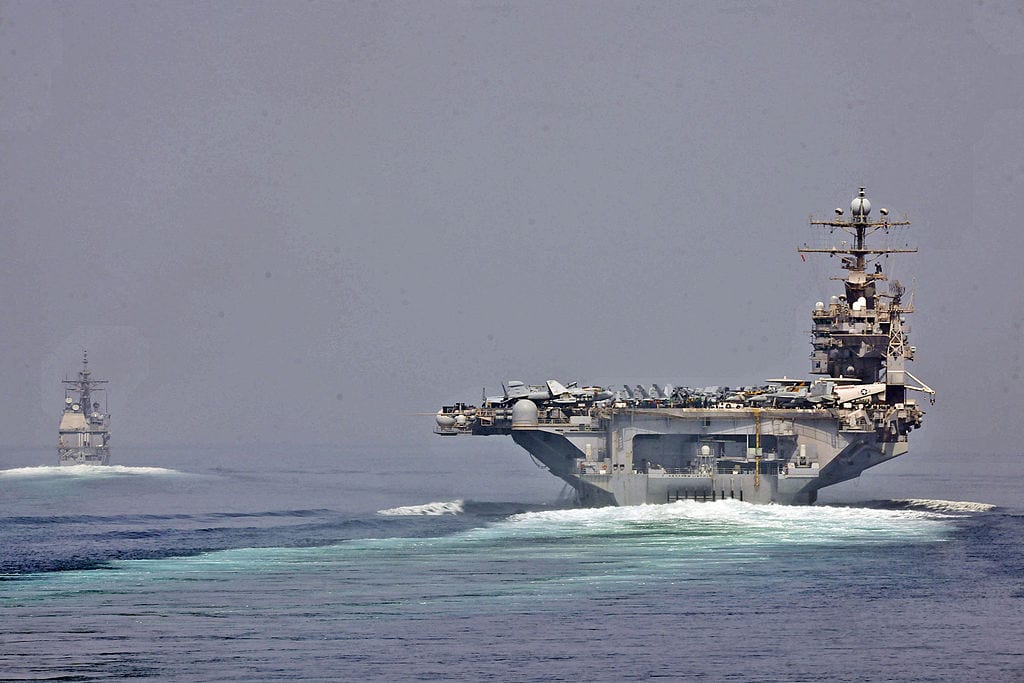 Watching the events of last weekend’s bizarre Iranian attack on Saudi installations, I predicted that the global price of oil would spike but that the increase would be manageable. Thankfully, these assertions have proven true.

Iran has had decades to seek an amicable peace with the West over its nuclear and geopolitical ambitions, but each time it has remained stubbornly obstinate in rejecting Western negotiation attempts. Even when the West grotesquely compromised itself on the altar of appeasement with Iran, as it did during the Obama administration’s piteous nuclear “deal” in 2015, the ruling mullahs in Iran proved to be entirely untrustworthy. Since 2015, Iran has engaged in a massive surge of nefarious activity throughout the region, confirming that it is not a regime interested in achieving peace with the West. Instead, the mullahs desire regional hegemony at all costs.

Thankfully, though, since Donald J. Trump became president in 2016, the United States has completely reversed course on the Obama administration’s Iran appeasement plan. Rather than weakness through mindless giveaways to the terrorist-sponsoring state, the Trump administration has insisted that Iran comply with international law and imposed onerous economic sanctions upon the country. And, with each provocation from Iran, U.S. resolve has only strengthened and increased cohesion between and among its Israeli and Sunni Arab allies in the region.

On top of the Trump sanctions, the Trump policy of promoting domestic fossil fuel production has helped to insulate the United States from the geopolitical risk of Iranian attacks on the world’s oil supply.

Therein lies the purpose of Iran’s attacks on Saudi Arabia’s oil production capabilities. Iran’s hope was to negatively impact the world oil market so badly that prices would spike to unmanageable levels, hitting American energy consumers — people like you and me — hard. The logic was simple: Americans vote with their wallets. If Iran could increase the direct costs on American voters for supporting hardline policies against Iran, the regime might force favorable domestic political changes in the United States.

Plus, with the Trump sanctions in place, Iran’s economy has been slowly dying, increasing political discord in Iran and threatening the stability of the regime. If the Iranians had managed to take out Saudi Arabia’s oil production capabilities over the long term, they could benefit economically, as desperate countries that are dependent on Saudi oil, like China or any of the European states, would come clamoring for Iranian oil.

Despite Iran’s oil gambit being a failure, it stubbornly refuses to negotiate. Forty years of existing as geopolitical pariahs, much like North Korea, have not softened the mullahs’ religious zeal to spread their Islamist revolution to the world. They assume the Americans are incapable of holding out against their iron will for very long. Rather than viewing their recent attack as the absolute failure that it was, I believe that Iran’s leaders are likely preparing to up the ante.

Iran Will Attack the Strait of Hormuz

Next, I expect Iran to go for broke and attempt to blockade the Strait of Hormuz, through which 21 percent of the world’s oil passes every day. Iran’s navy is nowhere near as powerful as the U.S. Navy. Yet the Iranians do have some asymmetric capabilities that bear noting.

First, Iran has developed the use of small, fast-attack boats that can maneuver better than the larger, more advanced U.S. Navy warships in the relatively close quarters of the Strait of Hormuz. Second, Iran has a large sea mine arsenal. Neither of these threats is enough to stymie an American maritime response to an Iranian attempt to blockade the Strait. Nonetheless, the world should be ready for the possibility of world oil prices spiking significantly in the event of an Iranian move on the Strait. Iran also possesses missiles capable of hitting American targets as far as 2,000 kilometers (1,243 miles) away.

The real question will be: How long would it take for the U.S. Navy to secure the Strait of Hormuz? After all, the longer an oil crisis there lasts, the higher the price of oil goes, and the greater the risk to domestic politics becomes. It is likely that Iran will seek to destabilize the oil markets soon as the United States enters what will be a contentious presidential election year. Iran’s leaders likely believe that the threat of higher oil prices will exacerbate fears of a recession, thereby putting political pressure on President Trump. Tehran also likely believes that such pressure will force Trump to negotiate rather than risk a war on top of that economic uncertainty — just as Americans are going to vote in 2020.

That is why the U.S. Navy and its partners must move a large contingent of its forces to nearby waterways to ensure that Iran cannot blockade the Strait. What’s more, American air power and special forces would have to be brought to bear to retaliate against the bases where Iranian attacks against the Strait originated. The Trump administration must explicitly state, and signal through force deployments to the region, that America and its partners will protect the international oil supply — no matter the cost. By moving sizable naval forces into the region, the Trump administration can better deter Iran (deterrence being the whole point).

Fighting in the Gray Zone

The United States must also be prepared for asymmetrical Iranian attacks. The FBI has already arrested a New Jersey man for apparently trying to help Hezbollah terrorists in the country identify potential soft targets in New York City.

More dangerously, Iran’s nuclear weapons program may have given the regime access to devastating electromagnetic pulse weapons that can destroy electronic equipment, sending America back to a 19th-century level of development. There is also the added threat of Iranian drone attacks, which have thus far proved to be devastating.

Lastly, Iran has already shown itself to be proficient in the shadowy art of cyber warfare. The Pentagon (and Western businesses) must be prepared for a sustained Iranian cyber warfare campaign directed against soft targets throughout the West. All of these attacks would occur in what the Israelis refer to as the “Gray Zone” of conflict.

Iran has already indicated that it will not fight fairly, and it rarely will hit a target directly. Yet it has also revealed its desperation and its willingness to risk much to further its geopolitical objectives. Rather than seek accommodation with this radicalism, the West must stiffen its spine against it. Ultimately, Iran cannot defeat the United States, and there is little reason to compromise over Iran’s nuclear (or wider geopolitical) ambitions so long as it continues on its present course.

Standing strong will deter Iran more than negotiations would. Only through continued strength and vigilance can the West ever hope to have a peaceful resolution to its current conflict with Iran.