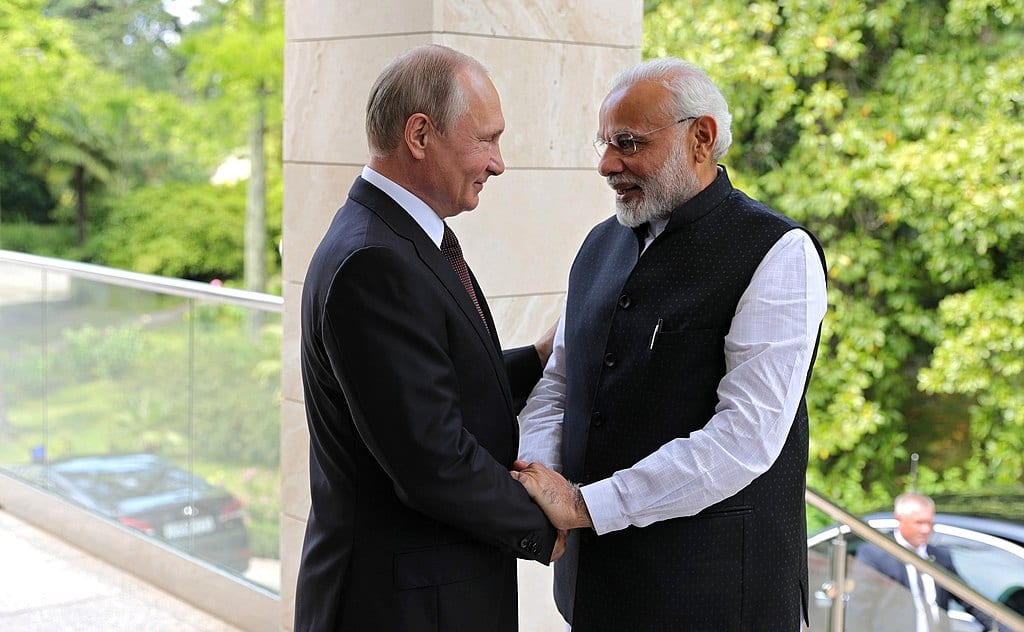 Russian President Vladimir Putin is scheduled to visit New Delhi on October 5. His visit follows India’s announcement on September 27 that it will procure the S-400 air defense system from Russia in a $5.4 billion contract. The integrated system is reported to comprise target detection and acquisition capability, command and control and launch platforms, and anti-aircraft missiles with a range of 250 miles.

Understandably, the United States is dismayed and has threatened India with sanctions, charging that India has violated U.S. sanctions against Russia. The thought of Russian advisers and technicians on India soil, and the ability of the system to monitor U.S. naval aviation in the Indian Ocean within its range are also disconcerting. Further, the U.S. and India have several protocols to support naval cooperation, including shared encryption platforms that could be vulnerable.

However, this decision by the Government of India should not be a surprise. Throughout the Cold War, India was a client state of the Soviet Union, and the beneficiary of military and agricultural equipment, and other economic support. Today, much of India’s military hardware is of Russian and Soviet origin, particularly the T-90 and T-72 battle tanks, Sukhoi multirole aircraft, and various types of MiGs, and the 45,000-ton aircraft carrier, Admiral Gorshkov commissioned by the Soviet Union in 1987 and now renamed INS Vikramaditya.

India is presently the largest arms importer in the world, representing 12% of world purchases from 2013 to 2017. In recent years, India has done much to diversify its sources of supply, with the U.S., Europe, and Israel gaining market share — to the detriment of Russia. The sale by Boeing of airlift and the P-8 Poseidon anti-submarine aircraft, as well as Apache and Chinook helicopters, put the U.S. as the lead supplier for the particular year of 2014. Boeing presently has a joint venture with the leading Indian conglomerate, the Tata Group, to manufacture fuselages for the Apache helicopter, and a joint venture with Mahindra & Mahindra to manufacture the F/A 18 fighter in India. And Lockheed Martin has a partnership to make the F-16 in India with the Tata Group.

In a similar effort to diversify, India has ordered 36 Rafale multirole fighters from Dassault Aviation of France — the French firm believes that an order of 200 such aircraft would be of greater benefit to the Indian technology and manufacturing sectors. Further, India is Israel’s leading arms client during from 2013 to 2017.

The U.S. and India continue to be aligned with respect to three mutual agendas: the ascent of China with its Belt and Road initiative, Indian Ocean naval presence, and continuing border disputes with India; the threat of Islamist jihad; and the potential for trade and direct investment to support the “Make In India” priority of the conservative government of Prime Minister Narendra Modi.

But in spite of the hype about the intensifying U.S.-India strategic partnership that spans three U.S. administrations and three Indian governments, we would be wise to remember that India will act in its perceived national interest. With so much of India’s present generation and legacy military hardware of Russian and Soviet make, the country will be reliant upon the Kremlin for training, advice, and spare parts for much time to come. Not only that, the historical and current friendship between India and Russia can be leveraged by India in addressing its concern over the Chinese aspirations in the region.

While India has become a close regional ally of the U.S., we would also be wise to remember that reliance upon the West is still a controversial issue in the country, not just limited to the Left. The economic clout of India, coupled with its regional military prowess that can raise the cost of Chinese aggression, make it unlikely that substantive punitive sanctions will be imposed by Washington.