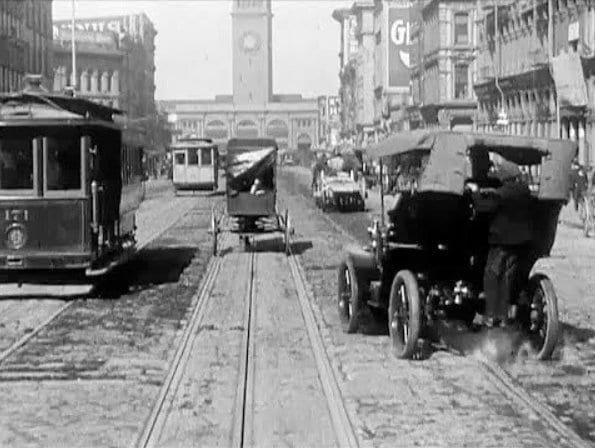 The most stunning thing about California’s Democratic-dominated progressivism is that it continually works toward some future Nirvana even as it blatantly neglects its fundamental, current responsibilities. The state’s infrastructure is crumbling and it has the nation’s highest cost-of-living-based poverty rate, but that hasn’t stopped the Legislature from focusing on such things as providing free universal health care and banning internal-combustion engines.

Most of the really kooky proposals end up dying in the state Capitol, or at least being watered down to the point that they simply impoverish the state on the installment plan. There are some checks and balances, and our outgoing governor has at times been something of a check. But 90 miles west of Sacramento, in the once-magnificent city of San Francisco, one literally cannot miss the fruits of this type of governance. It’s hard to avoid stepping in it.

Conservatives mock the City by the Bay and wish all manner of ill will on it. I get that, given that it has long been a playground for progressive policymaking. After I moved to Northern California, I attended a talk held by an up-and-coming San Francisco supervisorial candidate and found the liberal policy proposals to be what I expected. Then I learned that this was the conservative candidate. Ah, I certainly wasn’t in Orange County anymore. But despite its lack of political sanity, I love the city and find its decrepit situation depressing.

At least everyone is noticing its tawdriness. “Trash bags full of approximately 20 pounds of human poop were left on the sidewalk over the weekend in downtown San Francisco,” the Fresno Bee reported on Wednesday. “It’s the latest — and perhaps most alarming — sign of the increased filthiness of one of the most popular cities in the United States.” Those smelly, possibly leaking bags were left in the downscale Tenderloin, but large swaths of upscale areas now resemble an outdoor sewer with human feces, open-air drug use, and other signs of the breakdown of civic order.

The problem of homelessness and drug abuse isn’t confined to San Francisco, of course. The Sacramento Bee this week reported that “safety inspectors have issued nine citations and fined the Department of General Services for failing to adequately prepare groundskeepers asked to clean up needles and fecal matter in Capitol Park.” Even the grounds around the state Capitol in Sacramento aren’t immune. In fairness, I’ve seen similar situations throughout the country. But in San Francisco the disorder isn’t confined to alleys and bushes. The encampments are in plain view and spreading. The panhandlers can be frighteningly aggressive.

An NBC Bay Area investigation from February “reveals a dangerous concoction of drug needles, garbage, and feces lining the streets of downtown San Francisco. The Investigative Unit surveyed more than 150 blocks, including some of the city’s top tourist destinations, and discovered conditions that are now being compared to some of the worst slums in the world.” In some cases, the situation may be worse than in the Third World because in those countries the filth and needles tend to be confined to certain neighborhoods, whereas in San Francisco the problem is everywhere.

NBC Bay Area reported this week that a medical association has canceled its planned convention in the city because of San Francisco’s increasingly mean and disgusting streets. “They just said that the conditions of the streets, in their mind, had gotten to the point where their delegates don’t feel safe coming to San Francisco,” according to the president of the city’s travel association. “They see harassment on the street, and it’s not a pleasant environment, so they have reconsidered all future years in San Francisco.”

City officials certainly understand the seriousness of the problem and its effect on public budgets. But some of their solutions might make the problem worse. Mayor-elect London Breed released a detailed plan in March to deal with homelessness. A few of the ideas — building shelters, cracking down on dangerous street behavior and people who shoot up on the streets, clearing away tent encampments, creating “street medicine teams” that reduce the reliance on paramedics — sound sensible enough. But the plan would throw at least a billion dollars of public funding at the problem via bonds and other forms of public spending.

And the plan would expand tenants’ protections. Breed touts her bill that guarantees tenants a right to civil counsel if they are facing an eviction and calls for protecting more affordable housing from returning to market rates. Those types of laws, however, provide a disincentive for investors to provide more rental housing. They are among the reasons that 30,000 apartment units sit vacant in the city, given that landlords are reluctant to rent to strangers because of the impossibility of ever evicting them. This once again reinforces the words of Swedish economist Assar Lindbeck: “Next to bombing, rent control seems in many cases to be the most efficient technique so far known for destroying cities.”

Of course, homelessness only is partially about the lack of homes. This crisis — and it does appear to be reaching crisis proportions in many California cities — is as much about drug addiction, crime, mental illness, and alcoholism as it is about housing. But housing issues trickle down. This is a city where rents for modest apartments top $4,000 a month and where the median home price has doubled in the past five years to an astounding $1.6 million. Young professionals compete to live in flophouses that used to be home to the nearly homeless and it’s quite obviously more difficult to find cost-effective places to house drug addicts and mentally ill people.

After decades of passing rent controls and tenants’-rights laws, I suspect that the city’s housing market is beyond repair. So is its civic culture, as the blight expands. The only thing that could change is if wealthy San Franciscans get tired of stepping in feces as they exit their multimillion-dollar row homes. No one wants San Francisco to resemble beige Irvine, but fewer open-air drug markets and tent cities might be nice. It’s hard, however, to focus on the nuts-and-bolts of clean streets when policymakers are busy using the city as what one GOP official terms the “utopian petri dish of America.”