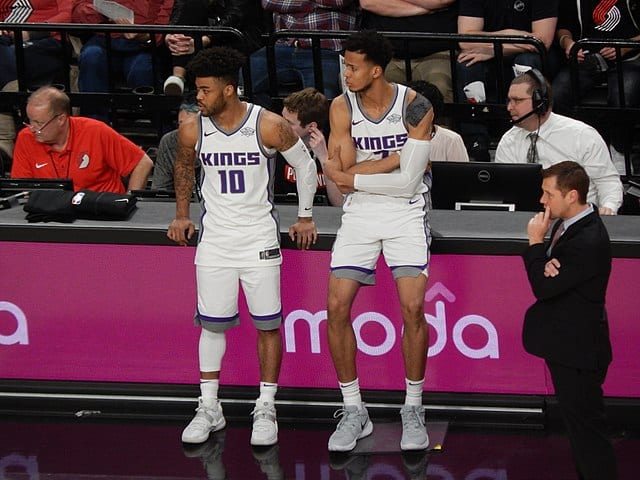 You play to win the game.
—
Herm Edwards

Well, not always, Herm. Not in professional basketball, at any rate, where these days you sometimes play to lose the game. You do it since it appears to be the shortest route to respectability, the playoffs, and possibly even a championship. If you are bad enough, if you lose enough games, then you’ll get a shot at drafting the next dominating teenager coming out of college after one season. In basketball, one is often enough.

So if it is late in the season with only a few games left and you have no chance at the playoffs, what are the incentives? If you play hard and win a few, you will finish the season with a record good enough to keep you out of the running in the race to draft the next LeBron or Michael. Your roster for the next season will be just good enough for a repeat of mediocrity.

The solution, then, is to lose. Finish with the league’s worst record this year and next year, you might be on the road to glory.

It is called “tanking” and the leadership of the National Basketball Association takes it seriously enough that it fined the owner of the Dallas Mavericks, Mark Cuban, $600,000 for saying recently to some of his players — and then repeating in a television interview — “Look, losing is our best option.”

Cuban also said of his veteran players, “They hated hearing that.”

Still, he was fined and a stern letter went out from headquarters to all teams, warning that “evidence that players or coaches were attempting to lose or otherwise taking steps to cause any game to result otherwise than on its competitive merits, that conduct would be met with the swiftest and harshest response possible from the league office.”

The NBA’s leadership may succeed in shutting down talk of tanking — a $600,000 fine will get your attention — but it can’t change the incentives. Sports are less and less about the games as discrete events designed to entertain and more and more about the franchise and its long run success and ratings. This is business. Single games are important only as they fit into the overall, long plan. There is a strategy with objectives and goals much larger than beating the Grizzlies at home on Saturday night.

Tanking is a perfectly rational strategy in this new world of ubersports. You can’t expect great athletes not to play as hard as they can — play to win — so you put your backups out there. Your rookies. Your over-the-hill journeymen. Keep your best players on the bench or, if one is injured, hold him out longer than is medically necessary.

Losing to a good team most likely won’t require even those measures. If a team is already outclassed, the coach can play his starters and figure that even if they play hard, the team will lose. And, thus, the long plan will win.

But if it is a matchup like the one between the Magic and the Kings tonight, or the Grizzlies and the Mavericks on Saturday night… well, then, any fan desperate enough to watch might be seeing a game that is decided by which team wants it least. The Magic, Kings, and Mavericks have a record of 20 wins and 45 losses. The Grizzlies, at 18 and 46, have them beat. But in a race this close, things can change. Someone might make a last minute three, thus screwing up the long range plans of the suits in the front office who might be angry enough to waive the player who made the game winning shot. What else are you going to do when a player can’t take coaching? When he puts himself ahead of the team?

Confusing as the rules of tanking are to players and coaches — they have, after all, been listening to that “play to win” gospel since they were kids — they may be even more bewildering to bookmakers. How do you set the line for that game between the Grizzlies and the Mavs? The Grizzlies have a worse record. But, then, the Mavs owner — the guy who signs the paychecks — has said publicly that his team’s best shot is to lose.

The tanking of games is both sound business and disenchanting. Unless, that is, you are one of those fans who decorates the house in his team’s colors and thinks in terms of three-year and five-year plans. If you like to tune in the occasional game and watch great players do stupefyingly athletic things, the notion will leave a sour taste. In sports, you think, it really should be about this game and not the drafting of players that will take place in a few months.

Meanwhile, as the NBA incentivizes tanking meaningless games, the league’s all-star game managed television ratings that were lower, even, than those of the NFL’s Pro Bowl, which is a nearly unwatchable affair. The players might as well be wearing shorts, no helmets, and playing touch. The NBA All-Star game was once a ratings draw and a fan favorite but a sense of disgruntlement has attached itself to the sport. Tanking might be one reason. Also poor play by kids who left college after one year, raw and unfinished and were drafted by the league’s worst teams.

And, then, there is politics. LeBron James has denounced President Trump. Players and coaches have made themselves heard on the usual things and managed, unsurprisingly, to say nothing especially original.

A recent New York Times piece about the Golden State Warriors and their coach, Steve Kerr, included this:

For a sports franchise, the Warriors are uncommonly engaged with the outside world, particularly when it comes to politics and social activism. Kerr and several of his players — superstars keenly sensitive to the hardships faced by black people — have been sharply critical of President Trump.