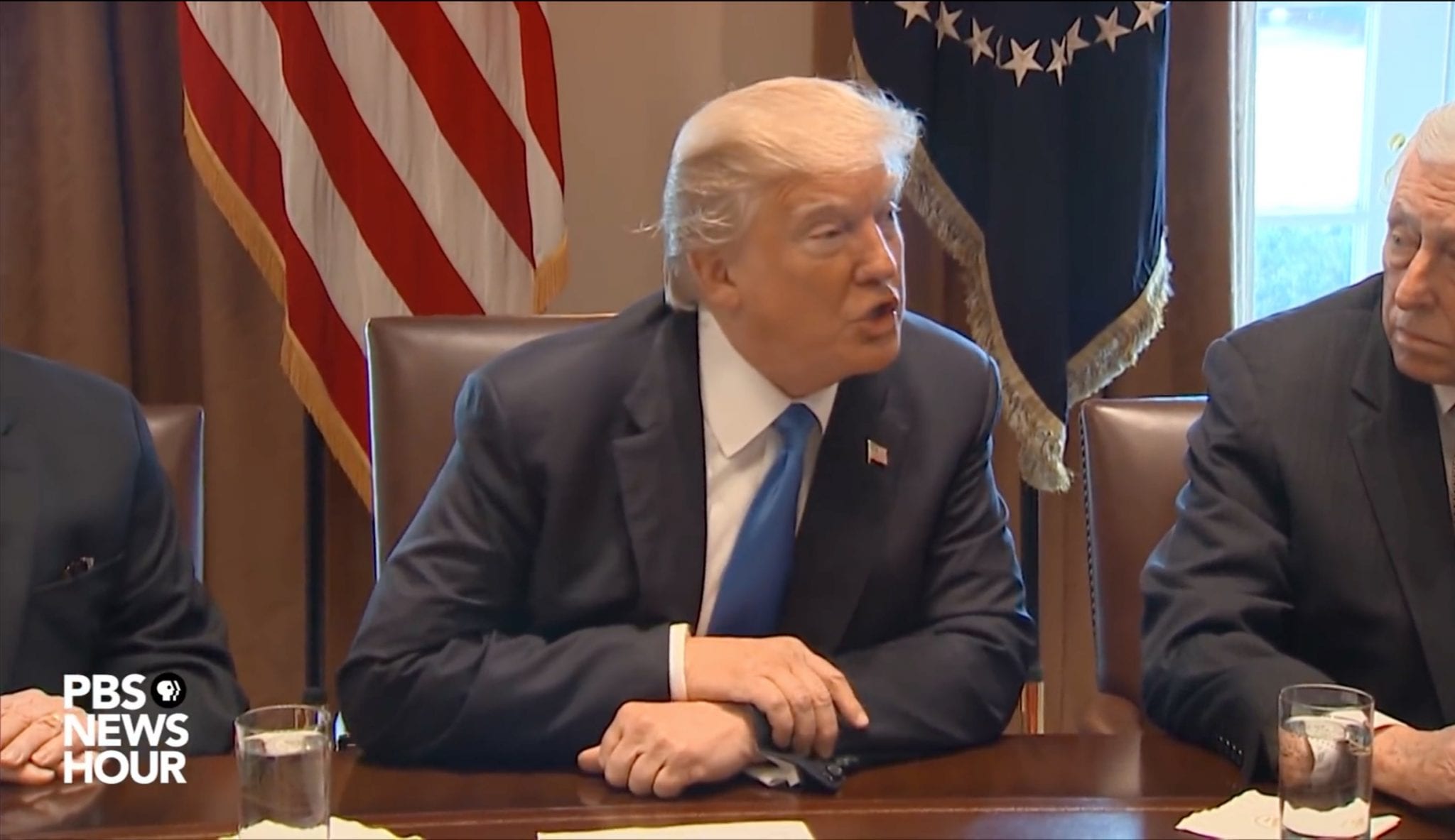 Thursday saw a media firestorm erupt over a Washington Post report that amid a White House meeting with several members of Congress working on a compromise having to do with the Obama-era Deferred Action for Childhood Arrivals program, or DACA, President Trump asked why America should have to take in so many immigrants from “s***hole countries” rather than people from places like Norway.

The Post article isn’t exactly the finest example of American journalism, identifying as its source no one actually in the room to confirm what Trump supposedly said but instead naming two anonymous people who were “briefed on the meeting.”

Those anonymous second-hand sources claimed that the offending statement came amid a discussion over a proposal to eliminate the diversity visa lottery program and use the 50,000 visas per year tied up in it to offer protection to “vulnerable populations” living in the United States under Temporary Protected Status. Trump became irritated at this, according to the Post, and asked about Haitians, and when the conversation turned to Africa Trump supposedly said, “Why are we having all these people from s***hole countries come here?” and suggested that maybe instead America should be taking in more people from Norway — whose prime minister visited the White House the day before.

The White House didn’t really deny the Post story despite its rather sketchy sourcing. White House spokesman Raj Shah instead defended Trump’s policy position, saying in a statement that “Certain Washington politicians choose to fight for foreign countries, but President Trump will always fight for the American people.… Like other nations that have merit-based immigration, President Trump is fighting for permanent solutions that make our country stronger by welcoming those who can contribute to our society, grow our economy and assimilate into our great nation.”

The Post reported that the Senators attempting to come to a DACA solution, most prominently Illinois Democrat Dick Durbin (whose track record indicates a lack of reliability where it comes to good faith in negotiations) and South Carolina Republican Lindsey Graham (no more need be said) were upset over, upon arriving at the meeting, being joined by immigration hard-liners Sen. Tom Cotton (R-Arkansas) and Rep. Bob Goodlatte (R-Virginia), among others. Durbin and Graham thought they’d have the president more or less to themselves. And when the meeting devolved into disagreement, with Trump showing no interest in a DACA deal, it’s pretty obvious someone on one or both of their staffs rushed to the Post to offer up a juicy second-hand Trump quote which might or might not have been reported in proper context.

But so what if it was?

Is there any question Haiti is a s***hole? Who’s offended by that? If it wasn’t a s***hole it wouldn’t be one of the most prominent recipients of American charity aid on Planet Earth. And it isn’t like this country has ignored Haiti — we’ve been trying to lift it out of s***hole status for more than a century, with absolutely no result whatever. In 1910, President William Howard Taft granted Haiti a large loan in hopes that Haiti could pay off its staggering international debt and therefore achieve a larger measure of independence from Europe. The result? Haiti defaulted and U.S. tax dollars were poured into a bottomless pit. In 1915, following the assassination of Haitian president Jean Vilbrun Guillaume Sam, President Woodrow Wilson sent in the U.S. Marines to help establish order there — and the American military presence in Haiti didn’t end until 1934. Yet so little was America able to influence the Haitians that Haiti is the only country in North America where baseball — a national pastime in the Dominican Republic next door — isn’t played by the population.

There is no poorer country in the Western Hemisphere than Haiti, though given time Communist Venezuela might well change that.

And no, it’s not racist to note Haiti is a s***hole. While Trump was having his supposed outburst his administration was removing Temporary Protected Status from some 200,000 Salvadorans, most of whom are not black people, who had entered the country illegally. Why would he do that? Perhaps because on balance, mass immigration from El Salvador isn’t such a great idea. Know what you get when you take in an unlimited number of illegal Salvadorans? You get MS-13, which is a Salvadoran street gang spreading its vicious tentacles into every Hispanic community in America in the precise way the Italian mafia achieved a chokehold into the Italian community in this country a century ago.

Apparently, repeating the errors of the past makes you a racist. Of course it does. And you’re especially racist if you note that the modern American Left’s patron saint Saul Alinsky learned the tactics of “community organization” passed down to today’s neo-Communist radicals from the Italian mafia in Chicago. Even more so if you wonder whether Alinsky’s ideological disciples don’t secretly want to repeat that collaboration in order to organize America’s Hispanic community into a monolithic Democrat vote, which would explain the jeers and “fact-checking” pieces hurled at Trump when his Justice Department declared war on MS-13 last year.

And yes, El Salvador is also a s***hole. When your country has the world’s highest murder rate, you qualify for s***hole status. Let’s remember that it was the dogged determination of the Reagan administration, by use of American treasure and a bit of blood as well, which kept El Salvador from becoming a Communist s***hole rather than an ordinary one — an effort which has resulted in little thanks from anyone and more than a little opprobrium from the cultural Left at the time and since.

How about Somalia? Who’s up for more mass immigration from Somalia? Is there any argument Somalia is a s***hole, or do we need a national screening of Black Hawk Down to remind us what that country is like? If you’d like a more recent depiction of what Somalia has to offer the world we could all watch Captain Phillips, the 2013 Tom Hanks vehicle about the true story of the Maersk Alabama, set upon by one of the multitudinous hordes of pirates — yes, actual pirates — sloughing off from Somali shores in search of fat from international commerce. Somalia is such a s***hole that its stench infects nearby countries like Kenya — viz., the Westgate Shopping Mall attack in Nairobi in 2013 — and Uganda, where Al-Shabaab, Somalia’s home-grown jihadist terror group, set off a series of bombs in the capital of Kampala to slaughter 76 people as they watched the 2010 World Cup soccer final.

What has America derived from mass immigration from Somalia? Machete attacks on street corners in Columbus and mall stabbings in suburban Minneapolis. And if you like, you can ask the current and former residents of Lewiston, Maine, what a boon Somali immigration has been to that town.

Afghanistan, anyone? How much of Afghan culture would we like to pour into our national melting pot? One imagines we have suitable populations of Hollywood and New York sophisticates who would find the Afghans’ use of little boys as sexual playthings rather quaint and charming. For the rest of us, revulsion is a more common reaction, and a desire to strictly limit immigration from there to those people we can properly vet is quite appropriate. After all, there is no more properly described s***hole on earth as Afghanistan.

Sure, ideally it would be nice if the president wasn’t quoted as describing other countries as s***holes. But these are s***holes. They’re places where the local culture is unquestionably, horribly dysfunctional, and where civil society and the rule of law as we know them do not exist. Successful immigration from such places depends on assimilation into our culture, and most definitely not the importation of their inferior culture — and that means small numbers of immigrants with skills and qualities ensuring their positive participation in our society. Not mass willy-nilly immigration to turn swaths of our cities into breeding grounds for Al Shabaab or MS-13.

The open-borders crowd doesn’t want to talk about that, though, and it wants to call you racist if you’re opposed to a deluge of immigrants from the worst places on earth. That’s why Trump’s “s***holes” objection is big news rather than the fact there are so-called political leaders who can’t agree to reorient our immigration policy toward taking people who can successfully assimilate here.

Between the two, the crude man who tells the truth and looks out for his own citizens is preferable to the genteel man who sells us out for cheap labor or ballot-box fuel for a political machine. If Trump is the former, so be it.