by David Catron
The House during yesterday’s vote (YouTube screenshot) 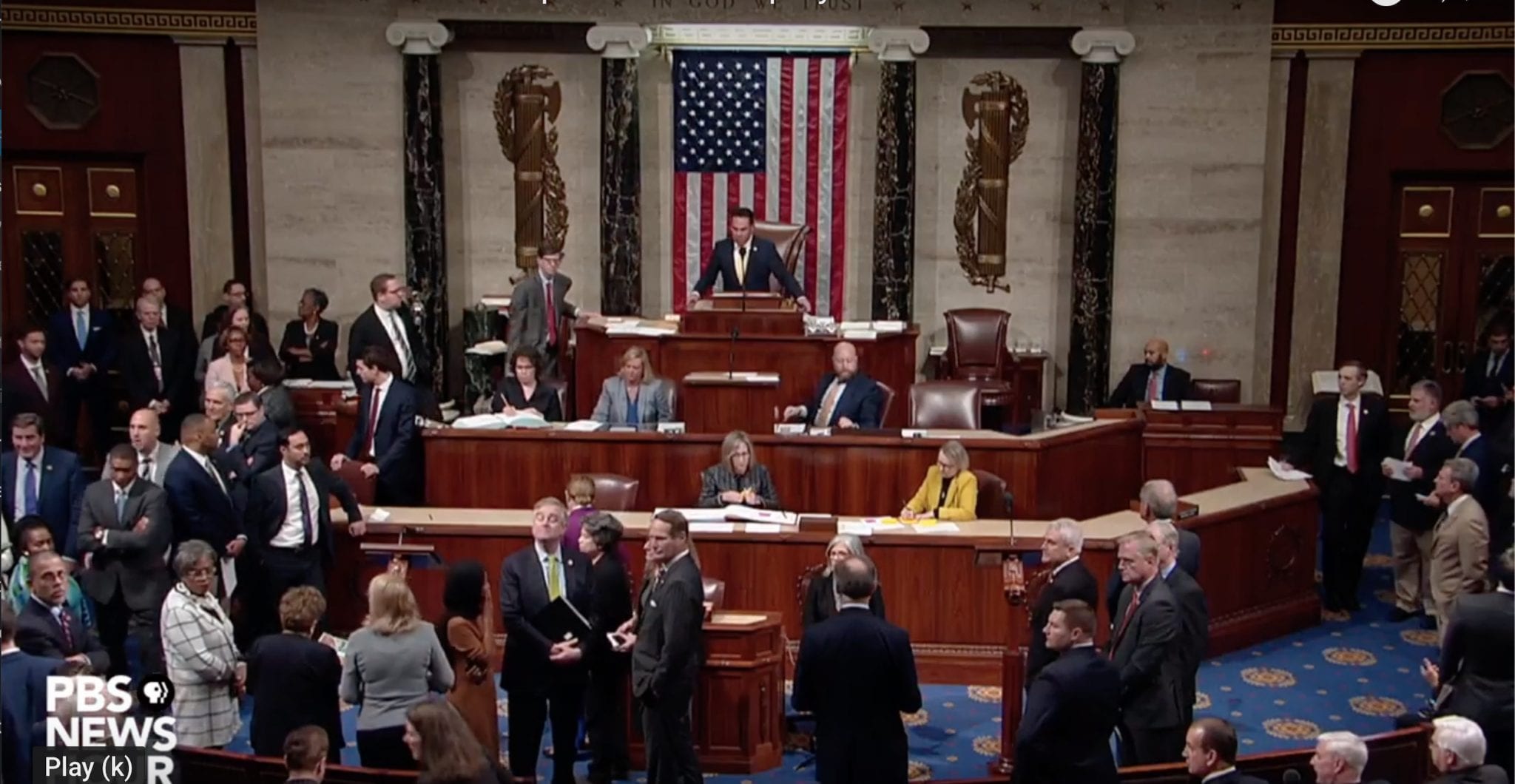 During the 2018 midterms, dozens of “moderate” Democrats won House seats in swing districts by forswearing partisan feuds in order to concentrate on the needs of their constituents. They pledged to focus less on conflict than on finding common ground with their Republican colleagues. They also modulated their comments concerning President Trump and, when the subject of impeachment arose, insisted that it would be a divisive and unproductive exercise. Thursday, however, all but two voted in favor of a hyper-partisan impeachment resolution, exposing their campaign promises as cynical lies and ensuring that the Democrats will lose their House majority in 2020.

The Democrats, their bluster about the 2018 “blue wave” notwithstanding, have a particularly tenuous grasp on the House majority. The GOP needs to flip only 19 seats in 2020 to regain control — and the National Republican Congressional Committee (NRCC) has already identified more than twice that number of vulnerable Democrats in districts won by Trump in 2016. Thursday’s vote has imperiled those weak Democrats even further by graphically illustrating that there really is no such thing as a “moderate Democrat.” Below is a list of Democrats who promised their constituents they would rise above the corrupting influence of the Washington establishment and are now likely to lose their House seats.

Rep. Joe Cunningham (D-S.C.): In 2018, Cunningham beat a weak opponent by fewer than 4,000 votes in South Carolina’s 1st District. During his campaign, and until just recently, he spoke of impeachment in the following terms: “I’ve warned members of my own party that a partisan rush to impeach the president would be bad for the country.” Last Tuesday, however, he announced that he would vote for the resolution. Like most of these faux moderates, he will tell his constituents that Thursday’s vote merely affirmed an ongoing investigation. This will not mollify the voters to whom he so brazenly lied. In a district that the president won by 13 points in 2016, Congressman Cunningham is a dead Democrat walking.

Rep. Max Rose (D-N.Y.): Rose defeated Republican Dan Donovan in 2018 in New York City’s last Republican stronghold, the 11th District. Like Cunningham, he told his constituents he was against impeachment. In fact, he wrote an op-ed that included the following denunciation of any such course of action: “Impeachment will not improve the lives of the hardworking Staten Islanders and South Brooklynites that I fight for every day.” But Congressman Rose had an impeachment epiphany after he arrived in Washington. The president won NY-11 by 10 points in 2016. With Trump at the top of the ticket again in 2020, plus a strong Republican opponent backed by the NRCC, Representative Rose is very likely a goner.

Rep. Kendra Horn (D-Okla.): Horn narrowly defeated incumbent Republican Steve Russell in Oklahoma’s 5th Congressional District, a major upset in a state dominated by the GOP. Her margin was painfully thin, and her victory was no doubt facilitated by her alleged opposition to impeachment. As recently as a month ago, she was still trying to have it both ways when talking to her constituents: “While I didn’t support an impeachment inquiry, I certainly know that these are serious allegations that have to be investigated.” Yet when Thursday arrived and she had the opportunity to keep her promise or cave to political pressure, she opted to betray the voters who elected her. Rep. Horn won her seat by a mere 1.4 percent in a district Trump carried by 14 points in 2016. She’ll be history after 2020.

Xochitl Torres Small (D-N.M.): Torres Small is yet another candidate who ran in 2018 as a different kind of Democrat and eked out a narrow victory over Republican Yvette Herrell in New Mexico’s 2nd Congressional District. Small did suggest a creative way to dodge the resolution: “The president’s conversation with the Ukrainian president must be investigated.… Designating this as an impeachment inquiry, though, has led some in the public to believe that a conclusion has been reached while … facts are still being gathered.” Yet she kept her toe on the party line during Thursday’s vote. Torres Small won her House seat by 1.8 percent in a district Trump won by 10 points. She should update her résumé.

Rep. Anthony Brindisi (D-N.Y.): Brindisi defeated Republican Claudia Tenney to win New York’s 22nd District and has always claimed to be averse to impeachment. After the fabled phone call between presidents Trump and Zelensky, however, his position began to evolve: “The thought that any government official, especially our commander-in-chief, would hold up foreign aid to an ally and suggest they investigate a political opponent, is a grave and troubling accusation. It is clear that this administration needs to provide answers.” Inevitably, he voted for Thursday’s resolution. In 2018 Brindisi won by less than two points in a district President Trump won by more than 15 points. He’ll be crushed in 2020.

Rep. Matt Cartwright (D-Pa.): In 2018, Cartwright fought off a challenge by Republican John Chrin in Pennsylvania’s 8th District. Cartwright has, unlike the other alleged moderates, not been coy about his support for impeachment. As early as September, he was pretty much committed: “We need to get to the bottom of these serious allegations through comprehensive impeachment proceedings.” The overall ideological bent of Cartwright’s district is difficult to gauge because it was redrawn in 2018 by the Supreme Court of Pennsylvania pursuant to a gerrymandering lawsuit. It is, however, located in a part of the state that the president won by double digits in 2016. Cartwright probably won’t survive 2020.

Rep. Jared Golden (D-Maine): Golden represents Maine’s 2nd District, despite his failure to win the most votes on Election Day in 2018. Pursuant to Maine’s ranked-choice voting, he was declared the “winner” several days after the polls closed. He has temporized on the impeachment resolution for some time, but finally caved to pressure from his caucus the day before the vote: “While I disagreed with the initial decision to open the impeachment inquiry, it is clear that the investigation has confirmed information contained in the whistleblower complaint.” Trump won Maine’s 2nd District by more than 10 points in 2018, so it’s a pretty good bet that Golden will be departing the House after the 2020 election.

And the beat goes on. In addition to the 12 listed above, there are 18 more Democrats clinging to districts that Trump won in 2016. That brings the total to 30. As noted above, the Republicans need to flip slightly more than half of these to retake the House. Moreover, the GOP is awash in campaign cash. As Open Secrets reports, “RNC continues to dwarf DNC in fundraising.” This means that the GOP project of retaking the House will enjoy three major advantages — a target-rich environment, the ability to fund any campaign that shows real promise, and the moral high ground associated with defeating an attempt to oust a president whose faults just do not rise to the level of impeachable offenses.

All of this brings us back to Thursday’s hyper-partisan vote and the resolution that purports to lay out the framework for the next phase of the “impeachment inquiry” launched by fiat during a news conference last month. This resolution, departing from 150 years of historical precedent, endows the House Intelligence Committee with extraordinary power over the inquiry, codifies Adam Schiff’s closed-door hearings, severely limits the powers of the Republican minority, and violates the president’s right to due process. The Democrats whose districts were won by Trump in 2016 have signed their own political death warrants by voting for this tawdry resolution. Execution day will be November 3, 2020.

David Catron
Follow Their Stories:
View More
David Catron is a recovering health care consultant and frequent contributor to The American Spectator. You can follow him on Twitter at @Catronicus.
Most Popular
Sign up to receive our latest updates! Register