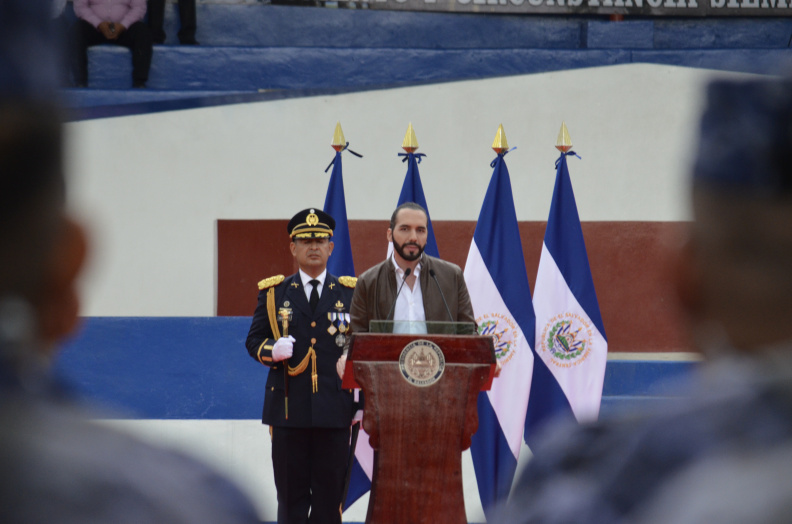 In a recent interview, Fox News host Tucker Carlson and Salvadoran President Nayib Bukele discussed the ongoing immigration crisis. Bukele didn’t offer some “woe is me” tale about the difficult conditions driving people out of his small country, but voiced a desire to solve the longstanding problem.

El Salvador makes up part of the Northern Triangle, along with Guatemala and Honduras, the three countries of origin for a majority of the new arrivals at the border in recent years. President Biden has taken a more lax stance on illegal immigration than his predecessor, and, as a result, new arrivals at the border have reached a 20-year high, and facilities for children have reached 729 percent of capacity. While there have been large Honduran migrant caravans making their way to the U.S. and an increase in detained Mexicans at the border, Bukele notes that his fellow Salvadorans are fewer in number among the huddled masses than they have been in recent years.

Speaking to Carlson, Bukele repeatedly emphasized that the two reasons that people have historically left his country are a lack of economic opportunity and a lack of security. When Bukele took office in 2019, El Salvador had the second-highest murder rate in the world, just after Venezuela. Since then, Bukele says that his country has seen a 75 percent decrease in the murder rate, and 2020 was a historically low year for murders for El Salvador. Bukele also said that “economic opportunities are better here than two years ago.” Due to the pandemic, however, the World Bank estimated an 8.7 percent contraction in El Salvador’s GDP, so Bukele might be overly optimistic.

El Salvador appears to be on a positive trajectory, despite COVID setbacks, and this is shaping migration patterns. Bukele told Carlson, “You don’t have any caravans coming out of El Salvador, but two years ago El Salvador was bigger than Honduras on immigration.” This has been the case, and if it continues, El Salvador will be able to overcome a 40-year pattern of societal failings and mass emigration to the United States.

During and since their brutal civil war in the 1980s, many Salvadorans have fled their homeland for the USA. The war between the communist FMLN guerrillas and the conservative government led by ARENA led to the deaths of tens of thousands of Salvadorans. Even after the war, these two parties have dominated Salvadoran politics. The victory of Bukele’s Nuevas Ideas (New Ideas) conservative populist party in 2019 broke the political duopoly that has caused so much anguish.

Even with these improving conditions, much irreversible damage has already been done. According to a 2018 survey, an estimated 2.3 million Salvadorans live in the United States. The population of El Salvador is 6.4 million people live, so the drain has been massive. Imagine if 87 million Americans, mainly the more skilled workers, up and left for Australia in the next few decades. Think about how much damage this would cause. That’s what has happened to El Salvador. Bukele described the situation memorably, saying a main Salvadoran export is people.

When there are exports, there is money to make, and criminal organizations have capitalized on this human revenue stream. Cartels have effectively monopolized illegal entry into the United States: it’s hard to make the journey across Mexico and into the U.S. without their permission, and of course a fee. Some recent estimates say that the human smuggling industry from Mexico into the U.S. generates $4 billion a year for the cartels. Much of this money likely pays for the impressive armaments the cartels have showcased in recent years.

Things do not always go as planned for the Central Americans who rely on cartels to enter the United States. Last week, the remains of 16 Guatemalans slaughtered on their way to the border arrived back in Guatemala. The migrants had been killed in late January, along with three Mexicans, in a likely cartel dispute, but they were so badly shot up and burned (likely alive) that the deceased could not immediately be identified.

The Biden administration’s botched messaging on immigration has seen the border flooded with Central Americans. This will only serve to drain Central America of its people and further fuel barbaric transnational organized crime, all while putting a strain on the recovering American economy, police departments, and social welfare networks.

Realizing the mess he has made, President Biden recently said, “I can say quite clearly: Don’t come,” but he added the excuse that “We’re in the process of getting set up.” This means that instead of addressing the root causes of the immigration problem, Biden simply hopes to delay and spread out the system that has failed for decades.

It’s abundantly clear that Bukele has a much firmer grasp on the situation than Biden. Only through sustainable economic growth, decreased emigration, and a massive reduction in organized crime will our southern neighbors be able to succeed. Biden has yet to offer any serious plans to confront these fundamental issues, and if his U.S. Citizenship Act passes, it will only open the floodgates more.