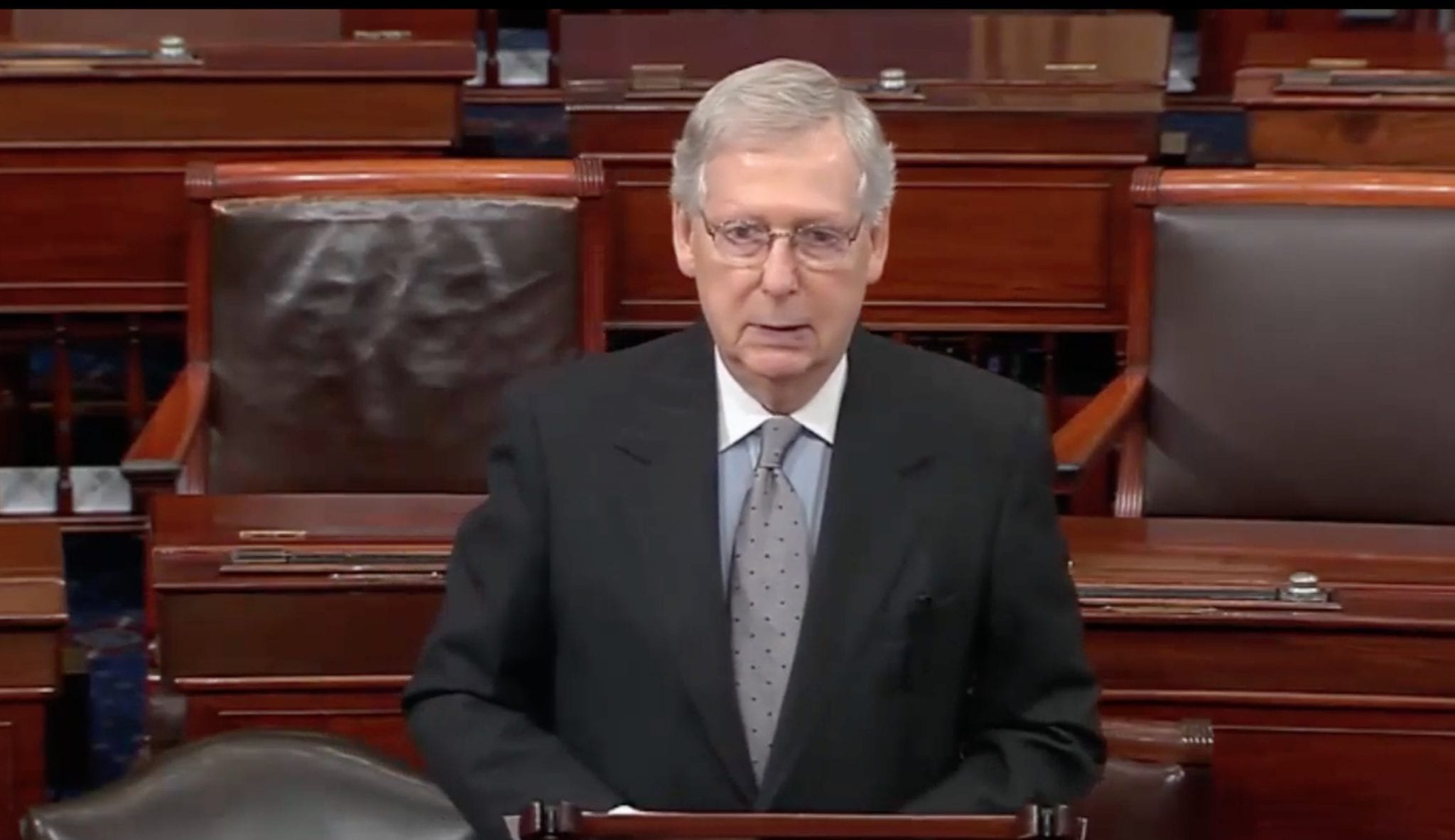 Now the Democrats have announced that, if the President keeps the Government shut until Congress approves a spending bill that allocates at least $5 billion for a wall along part of our southern border, they reciprocally will refuse to participate in legislating anything in the Senate. Oh no! What will we ever do! The Senate Democrats won’t legislate!

Under the principle of “Occam’s Razor,” sometimes the best solution to a complex problem is the simplest. This one is even easier because the problem itself is simple, and the solution is obvious. Every time a major piece of legislation goes to the Senate, it requires sixty votes for passage because of the way that the institution has corrupted the original filibuster rule. Under the rules of a traditional filibuster, any Senator has the right to take the debate floor and to hold the floor — literally to refuse to give it up — for as long as he or she likes, whether for days or years. The only way this “filibuster” can be stopped under those rules is when at least sixty Senators get fed up and vote for “cloture” (a synonym for “We got the point, ok? So shut up already, will ya?”).

In a true filibuster, therefore, a Senator really has to work hard and overtime. He has to keep at it for hours and days, as in the famous version depicted by Frank Capra where Jimmy Stewart filibusters in Mr. Smith Goes to Washington. In recent years, true filibusters have been conducted by Senator Rand Paul and by Senator Ted Cruz. Those filibusters were real, therefore memorable. Whether you liked their purposes, you had to give grudging respect to their initiators. By contrast, under the corruption of the filibuster rule that now dictates virtually all Senate matters except for the once-in-two-year Budget Reconciliation vote and the confirmation of Presidential appointments, virtually all legislation before the Senate now presumes an active filibuster in progress, requiring sixty votes for cloture and passage. No Senator needs to go through the inconvenience of actually standing up, truly being a hero, and making a compelling case for holding up all other business. Rather, those pretenders just make believe to each other that they all are heroes and act, by mutual agreement, as though they all are filibustering. So everything needs 60 votes. Because the Democrats have been in “Resistance” mode since the double trauma of (i) seeing their precious Obama leave with his faux Greek columns and (ii) grasping that their despised Hillary lost again, it has become all-but-impossible to get anything meaningful past the Senate these last two years. Even though the Republicans now have a solid Senate majority of 53-47, that clear majority remains insufficient to crack 60. Consequently, all the Senate is good for anyway is: (i) passing legislation that liberals want, such as the recent prison reform rules; and (ii) naming post offices and federal buildings. (And, yes, until they acted in 1972 to name the old “Senate Office Building” for recently deceased Georgia Democrat Richard Russell and the new one for recently departed Illinois Republican Everett Dirksen, those two structures were known by their acronyms: the “Old S.O.B.” and the “New S.O.B.”) Approximately one in every six public laws passed by the 108th Congress entailed naming a post office. In 1894 the Senate enacted a law that removed the “h” from the end of the Pittsburg[h] Post Office’s name. After intense lobbying, the Senate enacted new legislation in 1911 to give it back. Now Sc[h]umer threatens that his Resistance will deny this kind of leadership to the American people.

So double your anti-depression meds because they won’t be naming post offices until we get the Wall. For the time being, why not just imagine that your favorite hero, cartoon character, television celebrity, or sports athlete has just had his or her name legally changed in state court to “United States Post Office.” So, while I pretend that Mickey Mantle had his name so legally altered, I will proudly honor “The Mick” every time I enter his eponymous “United States Post Office” — the name I will pretend he assumed before his death. (If you think it crazy that someone would select such a name, consider one Ronald William Artest, Jr., who played for the Los Angeles Lakers basketball team and changed his name legally to “Metta World Peace.” Among other things that gained that dribbler lasting fame were the times: (i) Mr. World Peace destroyed a TV camera in Madison Square Garden, (ii) he confronted team head coach Pat Riley in Miami, and (iii) the wildly violent fisticuffs melee he helped instigate during a basketball game between the Detroit Pistons and the Indiana Pacers when he first jumped into the crowd to take on one fan and ultimately punched out Pistons fan A.J. Shackelford. For those memorable moments, the National Basketball Association imposed on Metta the longest suspension in NBA history. It is said — okay, it is said by me — that Iran hesitates to use nuclear weapons because the Ayatollahs are concerned that Mr. World Peace will sue them for cultural appropriation.)

So Schumer and his Democrat cohort plan not to do anything in the Senate until further notice — which actually is (i) a blessing, and (ii) impossible to discern how that differs from the past two years. In the words of Senate majority leader, Mitch McConnell:

Today, my friend the Democratic leader is proposing to add a Senate shutdown to the partial federal government shutdown and block even more of the people’s business, all to avoid more of what he already voted for. The only things that have changed between then and now are the political winds and of course the occupant of the White House. So this is no newfound principled objection. It’s just political spite. A partisan tantrum being prioritized over the public interest.

That threat invites the Occam’s Razor solution for the GOP: stop wasting time naming post offices, and start shifting into high gear on confirming the seventy-plus federal judges whom President Trump has named and who yet await Senate action to assign them to their benches.

President Trump has been making these fabulous judicial nominations. Under yet another of the Senate’s endless arcane rules — talk about Government shutdowns! — Senators are allowed to insist that each and every nominee be subjected to a full 30 hours of debate on the Senate floor. It is a joke. Inasmuch as the nominee already has been through the wringer of Senate Judiciary Committee hearings — remember what those are like? — what is it that can be said further in thirty hours about a person’s qualifications that cannot be said in ten hours, five hours, three hours? The whole aim of the Democrats has been to slow down the confirmation process, to jam the machinery, and to sabotage movement in the name of “The Resistance.”

Right now, twelve highly gifted people are awaiting confirmation to the federal appellate circuits as United States appeals court judges, and approximately sixty others are awaiting confirmation as federal trial judges in their new roles as United States district court judges. At the rate of thirty hours per nominee, seventy-two such dragged-out confirmations would require 30 x 72 = 2,160 hours of Senate time for all to be confirmed. Again, understand: that does not mean 2,000-plus hours of debate. Nothing particularly meaningful is said. It just means killing 2,000-plus hours, watching the second-hand tick on the Senate clock like a dripping faucet 129,600 times. Even at the blistering rate of convening the Senate for 24 hours per day, those 2,160 hours would take 90 days. That means, even if Mitch McConnell keeps the United States Senate open 24/7 — yes, also throughout weekends — and if they decidedly address absolutely nothing else while Schumer & Co. hopefully shut down all legislative activity and stop consideration of all but the President’s federal judicial nominations, it still would take three months to get all those new Trump judges confirmed. Add more days of clock ticks if you also would like to see the confirmation of a Secretary of Defense, Interior Secretary, Attorney General, and such. (And the Democrats complain about shutting down the Government?)

That focus is exactly what McConnell should be doing. The current Senate term has two years to go. Even at the pace of a 24/7 full-court press, it will take more than three months to get the current six dozen judges and federal cabinet appointments through. By then, a whole new crop of judges will have been named, too, and they also will need time at 30 hours per. That is what the Republican response must be: not words, not threats, not vituperation. Just keep the darned Senate open and in session non-stop for the next several months, and get those judges and other Presidential appointments through. Thereafter, when the Democrats and the President finally figure out how or whether to resolve the standoff over the Wall, the Senate can return to regular order and do that thing they do best: white-out all other urgent matters of business and return to naming post offices — or as the intersectionalists might say, “white Mail privilege.”