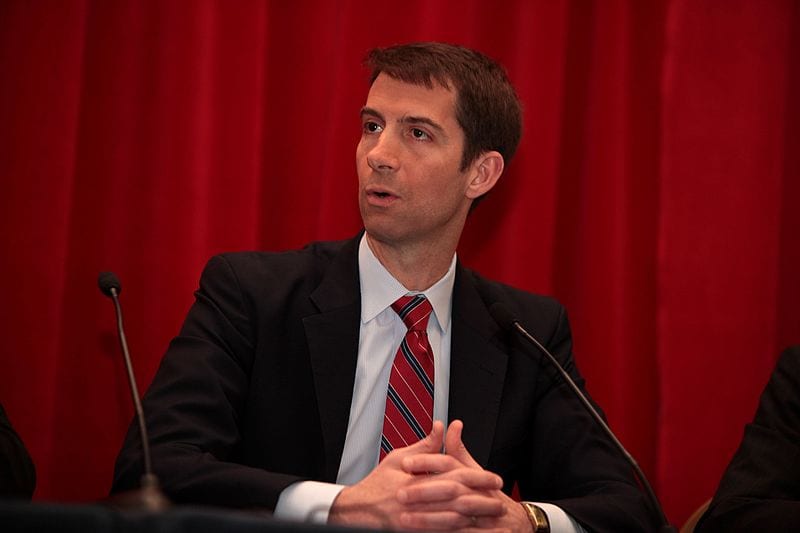 There are many bad ideas flying around right now in Congress. The recent proposal by Sen. Tom Cotton, R-Ark., to give some taxpayers a rebate check funded with the tariff loot is one of those ideas. It’s not only bad economics but it also comes across as hush money to keep tariff victims silent in advance of the next election.

The senator’s Tariff Rebate Act seems straightforward at first. It would require the Treasury Department to set aside revenue from the Section 201, 232, and 310 tariffs and redistribute the money equally among each American adult who files a tax return and does not earn enough money to be in the top four tax brackets. Every American filing alone with an annual taxable income less than $84,200 and every married couple filing jointly making less than $168,400 gets a check that could amount to $200 for a single person and $400 for a married couple. It could be even more if the president continues his expansionary tariff policy.

Up until now, Cotton has bent over backward to defend President Donald Trump’s trade war. He even defended the tariffs by claiming they inflicted no pain on consumers or farmers. But this bill suggests that he has changed his tune. He’s contradicting one of the administration’s main talking points — namely, that the tariffs are paid by the Chinese. Obviously, anyone who understands economics knows that American consumers pay most of the tariff costs.

Cotton’s bill also demonstrates his lack of economic understanding. Mary Lovely, a trade economist at Syracuse University and the Peterson Institute, aptly pointed out to me by email: “Taxpayers are not made whole when tariff revenue is returned to them. Taxes create excess burden by distorting economic choices. These distortions impose costs beyond any income taken in tariff revenue. Anyone who thinks the losses caused by tariffs are fully reflected in new revenue probably flunked public finance.”

Indeed, the tariffs’ toll goes far beyond their initial cost. According to a new statement by the World Trade Organization, the heightened uncertainty created by the trade conflicts “is leading some businesses to delay the productivity-enhancing investments that are essential to raising living standards.” One visible sign is that global merchandise trade is expected to expand by only 1.2 percent this year, as opposed to the 2.6 percent growth that was predicted back in April.

The tariffs imposed on hundreds of billions of dollars’ worth of goods and services consumed by Americans, along with retaliatory tariffs from other countries, have led to the loss of foreign markets, reduced profits, and layoffs for U.S. businesses in every industry downstream of these levies. Two thousand five hundred American businesses have already filed exclusion requests on 31,000 goods for the China tariffs alone. The irony is that even U.S. steel producers, which some of the tariffs were meant to protect, are hurting and laying off workers.

Redistributing money to some taxpayers isn’t going to fix any of these problems. The real and only solution is to lift the tariffs, period.

Whatever one thought at the onset of this trade war, the president has had a year and a half to try his strategy. It has failed. We have no deal with China, and experts predict that whatever deal we may eventually get will be minor and mostly face-saving. NAFTA’s proposed replacement, the United States-Mexico-Canada Agreement, is nowhere near seeing the light of day. And a new deal with Japan pales in comparison to what had been agreed to in the Trans-Pacific Partnership — an expansive free-trade deal with 12 nations, including Japan and Vietnam — which Trump withdrew from as soon as he took office.

Cotton’s bill is better understood as a side payment to help the president in the next election. The Washington Post‘s Henry Olsen, a Trump supporter, admitted as much when he wrote that “Cotton’s approach addresses both the economic and political challenges arising from Trump’s tariffs.” Olsen adds that this payment would resonate quite well in Wisconsin, an important electoral battlefield. “A $1,000 check compensating them for the effects of a patriotic battle they wanted to fight anyway,” he explains, “would look pretty good to them.”

Shifting rhetoric and the constant distortion of facts have been at the heart of the defense mounted by the president’s tariff supporters. And now we can add monetary bribes to the list.