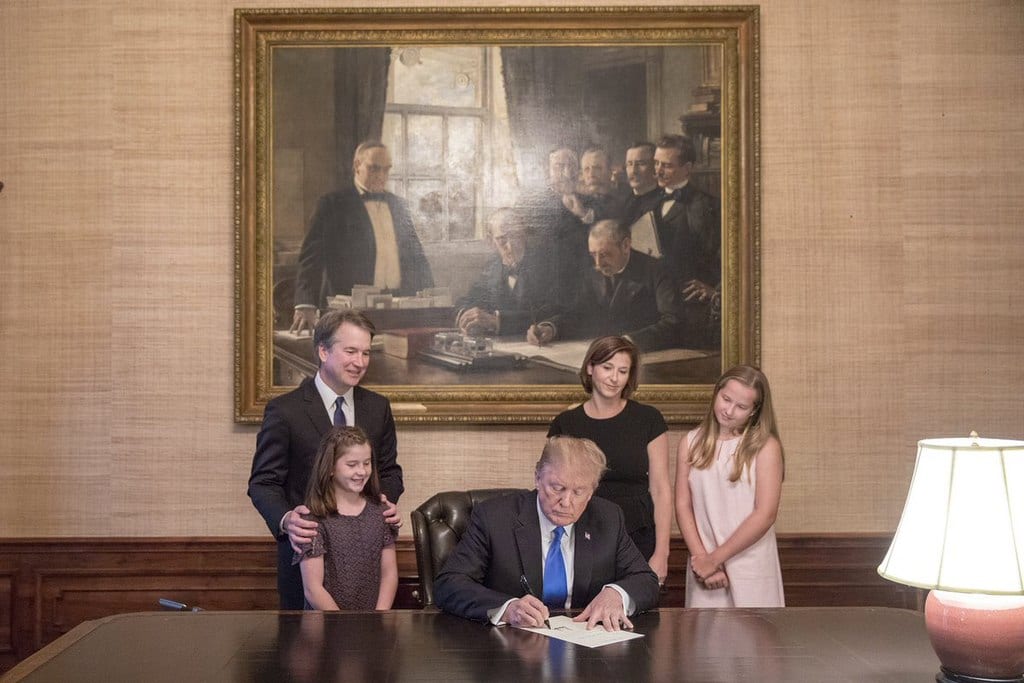 Americans, some time ago, ceased tolerating each other: stopped giving each other the benefit of the doubt in most cases; content to affirm inherited essentials such as, well, the value and necessity of freedom. The main thing we want to do, it seems, is kick each other’s teeth out. Boy, we’ll show you, you (obscenity)!

America is culturally anxious and distraught, eager for firm leadership — which is why the question of Supreme Court supremacy figures so large in our deliberations, if you can call a catfight a deliberation of high intellectual import.

Justices of our nation’s loftiest court have come to outrank senators and congressmen in constitutional importance. They get things done; they tell you what you can and can’t do. Like presidents, come to think of it.

It doesn’t matter much who the speaker of the House of Representatives is, or the chairman of the Senate Finance Committee. These folks come and go. It matters intensely who sits on the court. Justices of the Supreme Court are our bosses. They tell us where to get on and off, with presidential help and voluble coaching from the media.

I suggest that, whereas a few decades ago a majority of Americans couldn’t have identified three of the nine justices, everyone today understands the weight of the shackles that Kavanaugh’s presence would impose on the high court’s coalition of three judicial, um, progressives, impeding Ruth Bader Ginsburg, Elena Kagan, and Sonia Sotomayor’s ability to give us whatever jurisprudence suits their private convictions.

It’s not supposed to be that way, constitutionally speaking — justices of the high court dominating our national life. But so it is, and we might as well get used to it. The justices more or less run America, with America’s implied consent.

Which is why a very large number of us rejoice to see Brett Kavanaugh stepping up to be measured for the black gown he could don for, who knows, 30 years. One reason we know we want Kavanaugh on the court is that the New York Times doesn’t want him there. According to the Times’ editors, foaming at the mouth, according to custom, the Constitution “is about to be hijacked by a small group of conservative radicals well funded by ideological and corporate interests.”

No, it’s not; not for one New York minute it’s not. The job of a — shall we say for rhetorical convenience — “conservative” Supreme Court is to prevent the hijacking of the court by small groups desiring to steer the country away from past commitments to free speech, religious truth, and government conducted outside the disapproving eye of the federal government. The Times’ wrath and fury show us the degree to which this goal now seems possible.

Whatever your opinion of Donald Trump — not that he cares much — he’s either a quick study or a hitherto-unsuspected Goldwater conservative. It’s not necessary to resolve such a question. By their fruits ye shall know them, says the Good Book. The fruits of Trump’s interest in taming the federal judiciary are apparent throughout the federal judiciary: in lower court seats filled; in the nomination of Neal Gorsuch to the high court; and now, to bear that estimable jurist company, the nomination and presumable confirmation of Brett Kavanaugh.

In the eyes of those who see Trump as irredeemably awful, the foregoing deeds leave more dark stains on the president’s record and reputation. Draw back a little, nonetheless. If the Supreme Court runs America, does it not make sense — from one perspective at least — to provide for as modest and unambitious a court as possible: reluctant to substitute its own opinions and prejudices for those of the founders, not to mention the once-sovereign voters?

It is time for a spot of rejoicing amid the uninspiring news to which we’re accustomed here in America. Let’s hear it, friends, for Justice-to-be Kavanaugh!