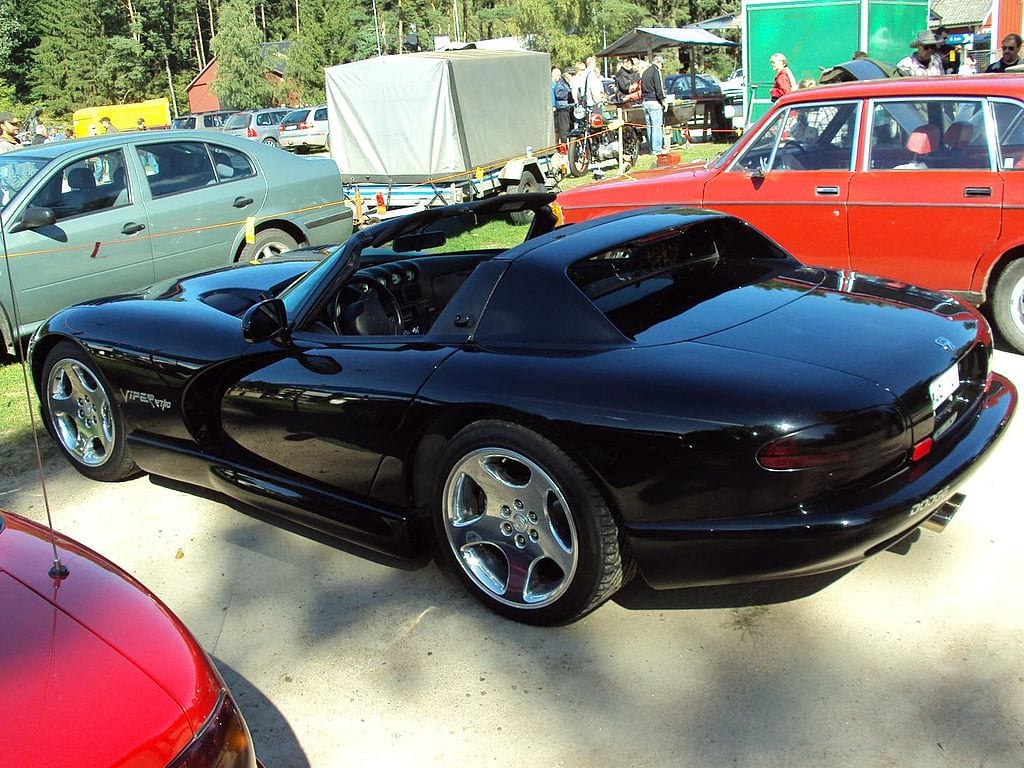 The Corvette now reigns as America’s only supercar. But there used to be two American supercars — the second one being the Dodge Viper.

It was, arguably, more super.

An 8.4 liter V10 (and 600 horsepower) rather than a 6.2 liter V8 (and 460 hp) paired only with a manual transmission. Not just anyone could drive a Viper. Almost anyone can drive a Corvette. And not just because it is available with an automatic. The Corvette you can drive to work, in traffic. It puts up with this sort of duty as agreeably as a Camry.

The Viper in traffic is like a Lipizzaner stallion forced to give pony rides to 10-year-olds at a birthday party.

Getting out of a ’Vette, you don’t risk burning your calves on hot sidepipes — because the Corvette hasn’t offered sidepipes since the ’60s. The Viper had them right through to the end — which was the 2017 model year.

The Corvette’s V8 is powerful, but idles as unthreateningly as the V8 in the Tahoe your wife drives the kids to school with. It ought to. It’s basically the same V8. When the ’Vette is started up, the exhaust note doesn’t make babies cry — and old people wince, clutch their chests.

When you start up a Viper, on the other hand…

That sound is threatening — a guttural bark, like a mechanical Rottweiler whose chain isn’t quite tight enough to keep him from lunging through the gate and clamping down on your throat. And it’s coming at you in stereo— from each side of the car — not in mono, from the rear only as is the case with Corvette. The Viper is as appalling a car to the politically correct set as a blackface routine. Which is exactly why the politically incorrect love it so.

But it’s not “safe” — and that proved to be its Achilles’ heel.

Well, not safe enough — as far as meeting the very latest federal saaaaaaaaaaafety standards. Specifically, Federal Motor Vehicle Safety Standard # 226 — yes, there are at least 225 othersaaaaaaaaaaaaaaaaaferty standards to be complied with.

FMVSS #226 decrees side curtain air bags for every new car. This in addition to the plethora of air bags already stuffed into almost every conceivable surface/corner of every new car — which has at least four of them and usually six. Now, two more — big ones — mounted in the headliner on either side of the roof, to drop down like a curtain in the event of a wreck — ostensibly to prevent the ejection of the passengers through the (broken) side glass and to protect them from impact intrusion through where the door glass was, prior to impact.

The problem — for the Viper — is that there’s no room to spare for the installation of curtain air bags. Putting them in the already low-slung roof would make the car undriveable except by dwarves, due to the loss of headroom for the sake of air bag room.

And that is why the Viper is no longer with us — 2017 was its final year — political incorrectness notwithstanding.

It would have been necessary to redesign the car to accommodate the curtain air bags — which gets into money and Fiat (which owns Dodge as well as Chrysler and Jeep and Ram trucks) apparently couldn’t justify the expense it would have taken to make it so — just for the sake of complying with FMVSS #226.

Keep in mind, buyers didn’t demand curtain air bags. If they had demanded them, it would have made sense for Dodge to make them available as buyers would have been willing to pay for them.

But the obvious fact is that buyers do not want to pay for them — else it wouldn’t have been necessary to mandate them. This obviousness is lost on the mandate-issuers, who insist that buyers pine for all these saaaaaaaaaaaaaaaaaaaaaaaaaaaaaafety “features” which for some inexplicable reason most buyers would never buy, if they had the choice not to.

It’s not just the money, either.

Stuffing curtain air bags into the Viper’s roof probably would have mucked up the car’s lines — and that’s no small thing when dealing with supercars, which sell on their looks as much as how fast they go. People forget that it was also federal saaaaaaaaaafety standards which helped ruin the looks of the American muscle car back in the early ’70s — when Uncle decreed the first bumper-impact standards.

The gorgeous lines of cars like the 1970 Camaro Rally Sport — with its delicate and almost entirely for looks-only bumperettes off to the left and right of an open grill — were marred by 1974 by ugly (and heavy) “5 MPH” bumpers plastered across the face it and every new car.

Sales plummeted. So badly that GM almost canceled the Camaro (and its sister, the Pontiac Firebird).

The people buying the cars didn’t demand the ugly/heavy “federal” bumpers and so there was no natural reason to install them. Mandates countermand natural choice. Your freedom to pick what you prefer is suborned and supplanted by the preferences of people you’ve never heard of and who are certainly not your guardians at litum.

How did they acquire this authority?

Think about it some — as you ponder the last Viper’s tail-lights fading away into the distance.…