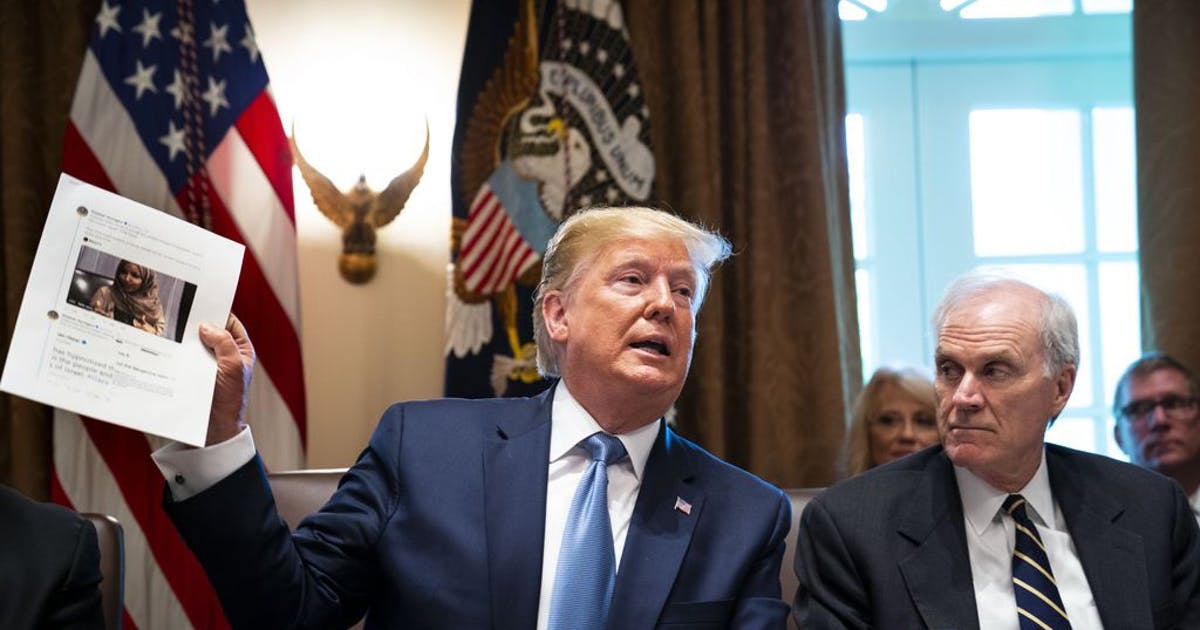 We have a president who dons fatigues and steel-toed boots whenever he enters a room full of politicians and media types, promptly takes an axe to the refreshment table, and then invites all in the assemblage to put up their dukes.

All oblige — like now, when the big national story, which doesn’t bear repeating after the last couple of days, is the president’s venture into racial commentary via tweets about the Democrats’ four furthest-left congresswomen, who, along with their party and the media, are duly outraged. They ought to be. He’s campaigning for reelection by pushing the Left and the party leadership into one undifferentiated, un-American — as he would have it — mass (a losing mass, by his calculations). And he’s having the time of his life.

This, too, will pass — that is, we’ll go on to new, and equally unproductive, knock-down, drag-outs. It’s regrettable, meantime, to see this present dust-up substitute for something of greater importance than mere wrangling and name-calling. We’re missing the chance to explore the abysmal ideas espoused by all four congresswomen, as well as most of the party’s presidential candidates.

We ought to be talking about the foul-smelling notion, abroad on the Democratic left, that freedom has pretty much had it around here and the government needs to start straightening out all of us. Says one of the four members of the Democrats’ left-wing “Squad,” Rep. Ilhan Omar of Minnesota, “We aren’t in the business of asking for power; we’re in the business of grabbing power.”

Instead, we talk about race, as that’s what was on the invitation Trump sent out — the four congresswomen being, as they call themselves, “women of color.” The president certainly foresaw, and didn’t care, that the media and the Democrats would run with the racial angle. Anything to win. We can talk about the niceties later.

The idea in need of display is that you don’t have to be black or white — born here or elsewhere — to put forth political ideas of endless absurdity, such as “free” health care for all, essentially open borders, fossil-fuel phase-out, abortion on demand, and a tax system aimed at letting the rich fund all such diversions, for as long as any ambition or capacity for work remains among us.

Why couldn’t Trump put before the country just the true and transparent idea that bad and dumb political ideas lack racial origin? White people have them. Just watch MSNBC or subscribe to The New York Times. The same proposition applies to every other race. A black person is equal to a white one, not just in terms of the unalienable rights with which the Creator endowed us all but also in the capacity for conceiving and proposing worthwhile, life-redeeming ideas — not to mention worthless, life-sapping ideas. A world that divides alongside the philosophical cleavage afforded by the Colin Kaepernick sideshow — Is the Betsy Ross flag racist? Or something? — is wasting valuable time.

It would be nice, both sides to the present controversy notwithstanding, to get back to the central point here, which isn’t that Trump’s native belligerence sometimes — like now, come to think of it — gets us in useless fights better saved for the right opportunity. The point is that the Green New Deal — outlined by whites, blacks, who cares, really? — is nonsense and merits utter rejection. We can’t afford it. We can’t tolerate it, never mind the size of the Bernie Sanders Fan Club. The reported vogue for socialism on the part of the young needs squelching — not by force (the tool of the Left) but by rational persuasion.

Trump, master operator as he conceives himself, plans to squash the ultra-left Democratic presidential ticket he hopes will result from embarrassing party moderates into alliance with Sanders, Elizabeth Warren, and Alexandria Ocasio-Cortez. Might work. But if not, what then? What if our master smasher and basher is wrong about the public’s mood, missing a vital datum: The thing many Americans want isn’t racket; it’s plain old peace?

In other words, how about AOC for attorney general?