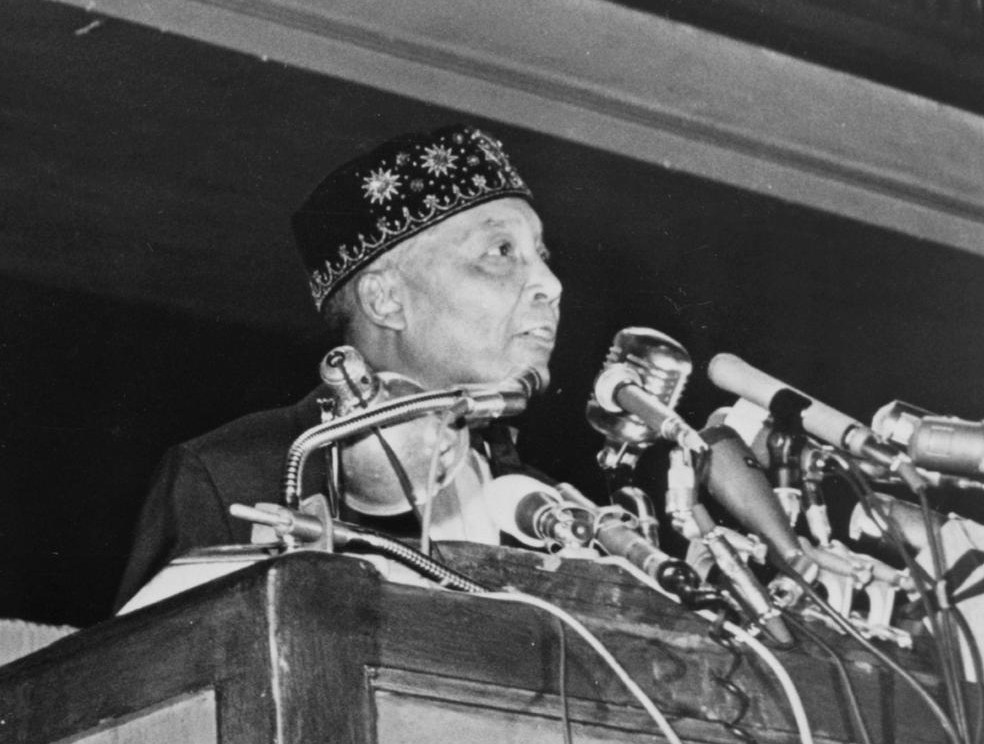 The Nation of Islam has great importance as the bridge for many black Americans to move from Christianity to normative Islam (i.e., the global religion dating to the 7th century). Despite its name, the Nation of Islam has only slight overlap with normative Islam, especially as practiced under its long-time leader, Elijah Muhammad (1897-1975). He developed some creative concepts almost completely unrelated to those of normative Islam, such as “black gods,” “blue-eyed devils,” and an extraordinary set of rules about proper diet.

Those rules apparently originated in vague form with the Nation of Islam’s founder, the mysterious W.D. Fard (c.1877–c.1934), who banned eating pig and other “poison animals”: duck, goose, opossum, and catfish. In a two-volume book titled From God in Person. Master Fard Muhammad. How to Eat to Live (1967-72), Elijah Muhammad then expanded on these basics, adding many more rules, discouraging or prohibiting a vast array of foods, while ascribing all these regulations to Fard, whom he called “Allah.”

According to Elijah Muhammad, the pig, which comes from another planet, is so poisonous that even a Muslim starving to death must not eat it; indeed, merely to inhale its scent is forbidden. Other foods “Allah” discourages or forbids include any animals weighing more than 50 pounds, which includes most mammals and some fish. In addition, all game, domestic animals, fatty foods, and all birds but squabs, are out, as is most ground meat. Elijah Muhammad rejected raccoons, all turtles, turtle eggs, frog legs, oysters, crabs, clams, snails, shrimp, eels, and most types of sardine. If meat is eaten, better it be kosher. Better yet, “Be a vegetarian.”

Avoid fried foods; baked ones are better. Out with cooked fruit and processed raisins. Also, avoid raw vegetables (except for a little bit of salad) and cook food thoroughly. No cheeses except for cream cheese. Canned food is not acceptable though jarred food is. No fluoride, spices, or salt except for kosher salt. Stay away from soda pop. No snacking! Alcohol and tobacco damage the male reproductive organs, but alcohol in moderation does only modest harm over a long time.

This does not leave much for Nation of Islam members: navy beans are “one of the best foods,” alone or with milk and whole wheat or rye bread. These, Elijah Muhammad says, “alone will keep us alive indefinitely.” But “Never eat fresh bread”: he insists on stale and moldy bread (“let it be a least a day or two old”), and preferably with the dough cooked two, three, or four times. Chew thoroughly, eat slowly, digest fully.

Further, on the principle that “the less you eat the longer you live,” the Nation of Islam leader called on followers to eat just once a day, preferably between 4 and 6 p.m. Most draconian of all, and recalling a concentration camp diet, he recommended eating only once every two, three, or even seven days. Children, however, may eat twice daily. The wrong diet also makes a person look old and behave badly.

Many sicknesses can be cured by abstaining from food: “Fasting is one of the greatest ‘doctors’ we have,” he wrote. “You would never be sick, eating one meal every three days.” Fasting also helps spiritually. Elijah Muhammad required that female Nation of Islam members be weighed twice a month and fined them a penny for each excessive pound of weight. Should Nation of Islam members follow this advice, they can live a thousand years, as they once did in a long-ago halcyon era.

Despite this draconian ideal diet, Elijah Muhammad fully realized that his followers would consume more than milk and stale bread; indeed, he confessed that he himself would “act the fool sometimes” and indulge in the wrong foods. To prevent this, the Nation of Islam serviced members’ needs by entering the food business, both wholesale (frozen whiting, cans of “Muslim Imported Sardines”) and retail (Your Black Muslim Bakeries, Shabazz Bakeries, Muhammad’s Fish House No. 1, Steak and Take fast-food restaurants). The Nation of Islam even hawked its own signature foods, especially the Shabazz bean pie.

These strictures began to fall by the side after Elijah Muhammad’s death in 1975, as the Nation of Islam moved tentatively toward normative Islamic practices. In a sign of the times, it opened the elegant Salaam Restaurant in Chicago in 1995, an institution that struggled to maintain Nation of Islam principles. As a 1996 Chicago Tribune article noted, despite promises “that Salaam would uphold the Nation of Islam’s dietary prescriptions against canned and premixed foods, the restaurant’s pantry was stocked with caseloads of instant mashed potato mix, premade pie fillings, canned fruit and vegetables and bottled salad dressings.”

Still, Elijah Muhammad’s dietary prescriptions remain alive. For example, in October 2019, the Nation of Islam’s weekly newspaper, Final Call, reprinted one of his columns, “Foods to Avoid,” with a reminder: “If we could eat one meal a week, we could live as long as Methuselah.”