Eminentoes Denmark,Family How to Be a Post-Prince? - The American Spectator | USA News and Politics
Menu
Eminentoes
How to Be a Post-Prince?
What to do when grandmother takes your title away?
by Bruce Bawer
The Danish royal family in happier days, Queen Margrethe II’s 70th birthday, April 16, 2010 (Bill Ebbesen/Creative Commons) 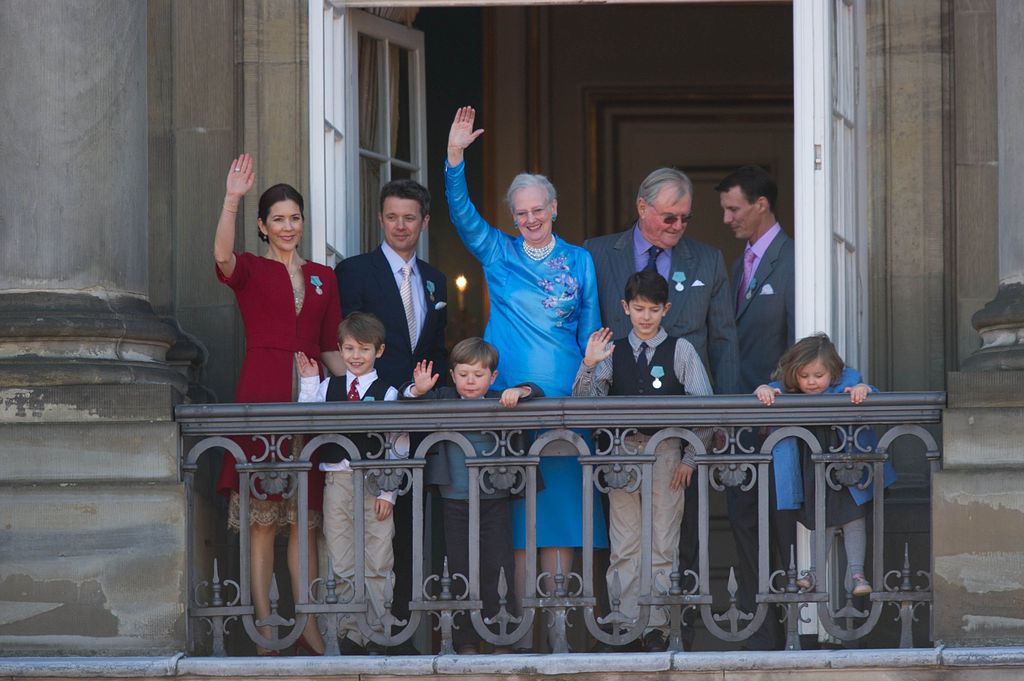 Unless you count the giant, icy island of Greenland — which is fifty times its size with a hundredth of its population — Denmark is a tiny country, about half as big as South Carolina. Its head of state, who in January celebrated a half century on her throne (a far more modest throne, mind you, than that held by her third cousin Charles in Britain), is the poised, intelligent Queen Margrethe, who at age 82 is now Europe’s longest-serving monarch. With her late husband, French diplomat Henri-Marie-Jean-André de Laborde de Monpezat (coincidentally, that’s also my plumber’s name), Margrethe had two sons.

The older, Crown Prince Frederik, has given Margrethe four grandchildren — the birth of each of which has shifted Margrethe’s second son, Prince Joachim, who these days is an attaché at the Danish embassy in Paris (nice work if you can get it!), further and further away from any chance of becoming king.

Like his brother, Joachim has four kids — two sons by his first wife, Countess Alexandra, plus a boy and girl by his second, Princess Marie. All four progeny bear the title of Prince or Princess. The two oldest are Prince Nikolai (23) and Prince Felix (20). After high school, both enrolled in the Danish military — and dropped out almost immediately because, they said, it wasn’t a good fit. They soon found a much better fit elsewhere — namely, at a modeling agency called Scoop Models. At its website, you can see their pictures, alphabetically listed under “Prince,” in between pictures of dudes named Oscar and Rasmus.

Now, forget for a moment that the Western world is currently presided over by the senile husk of a corrupt career politician who has almost certainly sold his soul to the People’s Republic of China. Forget that the Western world is at present involved in a proxy war with a proud but fast-declining nuclear power run by an aging megalomaniac. Forget the runaway inflation that seems to be hurtling us all toward economic disaster. Forget that Bette Midler is starring in a just-released sequel to Hocus Pocus.

No, here’s something more distressing. On September 28, Queen Margrethe announced that as of January 1, Joachim’s four offspring will no longer bear the title of prince or princess. Instead they’ll be Count or Countess of Monpezat and will be addressed not as Your Highness but as Your Excellency.

Margrethe’s stated reason for this change in nomenclature is that, since these kids will never inherit her throne, it’s important for them to lead normal lives — lives, in other words, like those of any ordinary count or baron or duke.

It would be an understatement to say that Joachim and his brood haven’t taken too well to this sudden downgrade. So hurt are they that, as of this writing, they still haven’t spoken with the Queen. Also, their relationship to Crown Prince Frederick and his wife, Mary, is reportedly “strained.” A royal expert stated solemnly that “communication within the royal house has broken down.”

But that doesn’t mean there hasn’t been a great deal of communication going on. Since the impending demotions hit the headlines, the aggrieved parties have been baring their souls to reporters. Nikolai, for example, says he was “shocked and confused” by Grandma’s decision; his mother, Alexandra, has pronounced herself “very sad and in shock,” adding: “The children feel ostracized. They cannot understand why their identity is being taken away from them.”

Perhaps most upset of all, however, is Joachim. He’s called his mother’s action “incomprehensible.” Although a palace spokesperson told the newspaper B.T. that Joachim had been notified of this move back in May, he maintained that he’d asked for, and been granted, “time to think and give my feedback.” Then, just the other day, he was given “five days’ warning to tell my children that their identity was being taken from them.”

In Joachim’s view, this amounts to “mistreatment” and “a betrayal.” His press secretary told a reporter that Joachim “was on the verge of tears when one of the European tabloids talked to him in Paris.”

Interestingly, this isn’t the Danish royals’ first such conflict. Joachim’s father, the above-mentioned Monpezat, never got over the fact that when he wed Margrethe he was made a prince, not a king. In 2002, thirty-five years into their marriage, he got so ticked off about a perceived rank-related slight that he fled to the royal chateau in France. A few months before his death in 2018, still piqued that he was only a prince, he announced that he didn’t want to be buried next to his wife.

At present, as it happens, the British royal family is being roiled by similar discontents. After the Queen died, Charles gave Meghan and Harry’s children the titles of prince and princess — but held back the Royal Highness honorific. Meghan and Henry were outraged.

As for Joachim, he says that his own outrage isn’t about him: he’s upset for his children. “My kids don’t know which leg to stand on. What they should believe. Why should their identity be removed? Why must they be punished in this way?”

As Mel Brooks so sagely observed while playing Louis XIV in his movie History of the World, Part One, “It’s good to be the king.” But how traumatic must it be to be a prince one day and a mere garden-variety aristocrat the next? No wonder Nikolai and Felix are having an identity crisis! Will Scoop Models want to rep them once they’re just — gasp — barons?

Nor is it just Nikolai and Felix who are suffering. So are their half-siblings, Henrik (13) and Athena (10). Their mother, Princess Marie, told the media that Athena “is being bullied at school. They come and say: ‘Are you the one who isn’t a princess any more?’” Marie says this isn’t about titles but about names: “Athena and Henry of Denmark. Those are their names…. It’s strange to think that you can suddenly take a name from a child.”

Oh, well. It could be worse. Maybe Joachim & co. will be able to put their plight into perspective if they watch the 1971 movie Nicholas and Alexandra. Or maybe they can take comfort from the fact that, in the year 2022, you don’t really have to be a prince to identify as a prince.

Image: This file is licensed under the Creative Commons Attribution 3.0 Unported license.