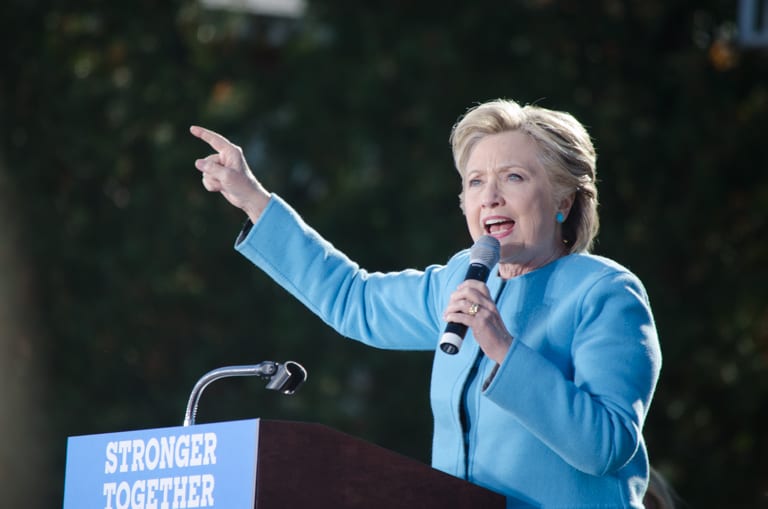 The letter James Comey sent Congress announcing his reopening of the investigation into Hillary Clinton’s emails during the closing days of the 2016 election came as a result of political machinations. The politicization of the bureau’s activities that harmed Hillary Clinton ironically came from keystone-cop agents who explicitly expressed a desire to help Hillary Clinton.

The FBI discovered Anthony Weiner’s laptop containing Clinton emails in late September of 2016. But James Comey did not send his eleventh-hour letter until late October. What explains the one-month lag time?

“In sum, we concluded that the explanations given for the failure of the FBI to take action on the Weiner laptop between September 29 and the end of October were unpersuasive,” notes the report of the Inspector General (IG). “The FBI had all the information it needed on September 29 to obtain the search warrant that it did not seek until more than a month later. The FBI’s neglect had potentially far-reaching consequences. Comey told the OIG [Office of Inspector General] that, had he known about the laptop in the beginning of October and thought the email review could have been completed before the election, it may have affected his decision to notify Congress.”

Why didn’t Comey know about the laptop earlier?

Ironically, interviewees repeatedly told the OIG that prioritizing the Russian collusion investigation necessarily meant putting matters pertaining to Hillary Clinton’s email investigation on the backburner. The peculiar decision to staff the Russian investigation with many of the same people who looked into Clinton’s emails led to the crucial delay that harmed Clinton’s electoral chances. Inspector General Michael Horowitz’s 581-page report notes, “We were surprised to learn that FBI leadership decided to assign many of the key members of the Midyear team, immediately after determining that no charges should be brought against then candidate Clinton, to the Russia investigation, which touched upon the campaign of then candidate Trump.”

Peter Strzok, the FBI agent who infamously pledged to “stop” Trump’s election, did not deem the laptop important enough to explore despite knowing it contained Clinton emails, many of which remained mysteriously missing. Strzok explained his decision not to immediately seek a warrant to the IG by explaining he “did not know what was there,” a premise that usually inspires rather than dissuades curious investigators from action. Strzok told the IG’s office that he had hoped to look into the matter in January or February after the election.

Despite a case agent describing an “oh s–t” moment on immediately seeing emails between Clinton and Huma Abedin on Weiner’s laptop in September, FBI attorney Lisa Page reasoned that “emails had been found lots of other places that ultimately weren’t worth pursuing lots of other times,” so why pursue this lead. Page dubbed the email find: “Good news, in a bad news way.”

Andrew McCabe, who sat in for Comey at a late-September meeting which discussed the discovery, offered the IG a number of I-don’t-recall type answers on why he did not fully inform the director of the find but generally left the impression that he believed he told Comey. Mary McCord, national security division principal deputy assistant attorney general, summarized a conversation with McCabe on the emails as “hopefully all duplicates.” She tells the IG that McCabe expressed this hope that the laptop contained material already in possession of the FBI.

Why did the assistant director of the FBI hope for one outcome? Why did an FBI lawyer working on the case describe the discovery of evidence as “Good news, in a bad news way”? Why did an FBI agent regard not knowing something involving an important investigation as a reason to remain ignorant of it?

One need not be a veteran FBI investigator to make a few deductions.

Beyond showing why the bureau did not seek a warrant on the material it possessed in September, the report answers the related question of why the FBI, after stalling, eventually reopened an investigation into Clinton’s emails in late October. It turns out the case agent in New York investigating Anthony Weiner (and not the Clinton email matter) began worrying that the FBI brass might set him up as a convenient fall guy should the public eventually wonder why the bureau sat on the information for so long.

“The crickets I was hearing was really making me uncomfortable,” the New York case agent on the Weiner investigation told the IG. He continued, “My understanding at the time was I am telling you people I have private Hillary Clinton emails, number one, and BlackBerry messages, number two. I’m telling you that we have potentially 10 times the volume that Director Comey said we had on the record. Why isn’t anybody here?”

At the time, the case agent emailed his worry that “I will be scapegoated if it comes out that the FBI had this stuff.” The FBI worried that the agent might leak what he knew to the press as a means of self-preservation.

Eight days later, FBI Director James Comey, who told the IG that “I should have been informed earlier,” wrote the consequential letter to Congress announcing the reopening of the email investigation.

“We found that what changed between September 29 and October 27 that finally prompted the FBI to take action was not new information about what was on the Weiner laptop but rather the inquiries from the SDNY prosecutors and then from the Department,” the IG report notes. “The only thing of significance that had changed was the calendar and the fact that people outside of the FBI were inquiring about the status of the Weiner laptop.”

“It’s the coverup, not the crime,” the Watergate postmortem mantra went. Something similar occurred with Hillary Clinton’s emails. From Clinton using BleachBit to scrub her server to sympathetic FBI employees seeking to delay an investigation of newly discovered emails until after the election (if at all), the email saga plays as a case study in how covering up often backfires. Had Clinton dealt with the issue forthrightly in 2015 when it first became came on the public’s radar, or had the FBI investigated the Weiner laptop for Clinton emails in September rather than immediately before the election, Clinton might have won the presidency. For a politician who began her career in Washington working for the House Judiciary Committee looking into Watergate, this unlearned lesson surely compounds the sting of her electoral defeat.