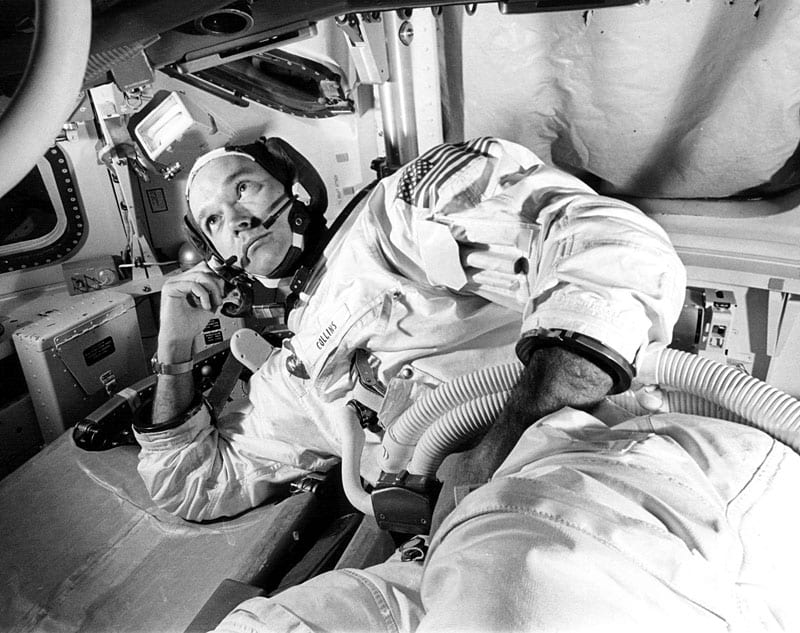 In 1962, President John F. Kennedy boldly declared that the United States would send a man to the moon and safely bring him home before the end of that decade. Apollo 11 accomplished that mission in 1969. In the process, the names Neil Armstrong, Buzz Aldrin, and Michael Collins etched themselves into world history. On July 20 we celebrate the 50th anniversary of that mission.

But history was supposed to be different. Astronaut Michael Collins was not scheduled to be on the mission; a neurosurgical procedure changed the history of human spaceflight.

Collins underwent an urgent spine surgery that temporarily grounded him, disrupted the rotation of astronauts, and altered the very names we remember from America’s race to the moon. He was originally slated for a place on Apollo 8 in 1968, along with veteran astronaut Frank Borman and first-time flier William Anders. Around that time, Collins started to show symptoms of cervical myelopathy. The bones and a disc in his neck were pushing on his spinal cord so that messages from his brain couldn’t be conveyed properly to his arms and legs. He first noticed this abnormality during a handball game. “My legs didn’t seem to function normally,” Collins noted in his book Carrying the Fire: An Astronaut’s Journeys. Like any good pilot, fearing mandatory grounding from flight, he ignored the symptoms for a while. But they quickly got worse; he had difficulty walking up and down stairs and experienced numbness and tingling in his legs.

He finally consulted a NASA flight surgeon, who sent him to nearby Houston on July 12, 1968, for a neurologist’s evaluation. The neurologist ordered an X-ray that revealed a significant C5-6 posterior osteophyte (bony overgrowth on the fifth and sixth vertebrae) that was pushing on his spinal cord. The entire disc, the shock-absorbing soft material between the bones, had ruptured and was pressing directly on his spinal cord.

Immediately, they scheduled a surgery with a civilian neurosurgeon. The intended procedure would have entailed removing the bone covering the back of his neck to release any pressure on the spinal cord. But this decision did not meet NASA standards; An Air Force officer and a national investment, Collins had to be seen by an Air Force surgeon.

This pivotal treatment decision saved his future flight on Apollo 11.

Air Force surgeon Lieutenant General (Dr.) Paul Myers gave Collins a second opinion, and he later performed the operation. He recommended an anterior cervical fusion with an iliac bone graft — similar to the final surgery Peyton Manning had in 2011 to save his football career. This is a neck-splitting operation in which the disc material and bone is removed from the front of the spine and then a new piece of bone is placed in the gap to induce healing. This bony healing or fusion is what the Air Force required for an astronaut to return to flying status. Collins had the surgery in August 1968 at Wilford Hall Medical Center in San Antonio, Texas.

It went smoothly. He wore a rigid neck collar for the next three months. The Air Force and NASA required documented fusion or bony healing around the new bone plug. Collins’ X-rays showed tremendously strong fusion and bony growth. In October 1968, he was cleared to remove the collar and fly transport planes (which are low-impact and have no ejection seat). By November he was flying jets, including NASA’s famous T-38 Talon training jet. It took Collins only 125 days to return to full flying status following his anterior cervical fusion, as Carrying the Fire describes.

His recovery was a medical success story. But it forced his removal from the crew of Apollo 8. Astronaut James Lovell took his place. In Collins’ absence, Lovell and the crew captivated the United States and the entire world with their flight. The mission was the first to leave Earth’s orbit and reach the moon, which the astronauts orbited for 20 hours. In the process, the astronauts read from the book of Genesis and captured the famous Earthrise photo. All the while, Collins watched from Earth in what imagines as a mix of pride for their accomplishment and frustration that he could not be with them.

This shift in the rotation of astronauts meant Lovell became the commander of the fated Apollo 13 flight in 1970. Lovell’s helped bring the three-man crew home safely during a mid-mission explosion in space.

History was changed by one giant rupture of a spinal disc in one man’s spine. The message of Collins’ resiliency, hope, and perseverance remains forever unchanged.

Richard Menger, MD, MPA, is a neurosurgeon and graduate of the Harvard Kennedy School of Government. He is the lead author of the peer-reviewed manuscript “Astronaut Michael Collins, Apollo 8, and the anterior cervical fusion that changed the history of human spaceflight.”