Political Hay,Top Story Abortion,Georgia,Hollywood Hollywood Versus Heartbeats - The American Spectator | USA News and Politics
Menu
Political Hay
Hollywood Versus Heartbeats
Entertainment and media elites should stop bullying Georgians and the infants they are trying to protect with the fetal heartbeat bill.
by Clifford Humphrey
Georgia Gov. Brian Kemp signs the fetal heartbeat bill into law on May 7, 2019. Image: Office of Governor Brian Kemp 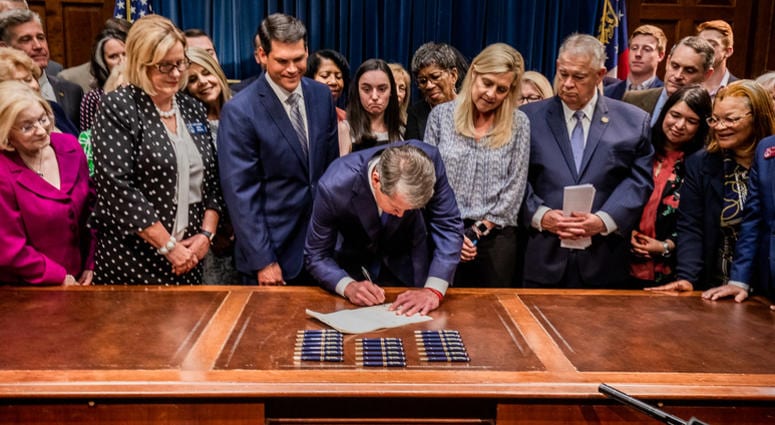 We hear a lot of talk these days about privilege. Privilege is the idea that some social advantage is available to members of only one group and unavailable to everyone else. Most of the claims about privilege are specious, either imaginary or else unavoidable. But there is one kind of privilege emerging that is both real and unnecessary: moral privilege.

The cultural and corporate elites who oppose the Georgia heartbeat bill, which bans abortion once a fetal heartbeat can be detected, praise themselves for being willing to sacrifice their financial interests in the state for the sake of conscience. But then they threaten Georgia with financial retribution for passing a law in accord with the conscience of Georgians. Whose conscience counts more?

Opponents of the Georgia bill seem to believe that Hollywood elites are allowed to live according to their moral scruples, but the rest of us must slavishly follow our financial interests. It is as if we somehow slid from being the land of the free to a land ruled by an oligarchy of the rich and famous. Does a minority in California now rule the constitutional majority in Georgia?

Standing up for what you think is right in life is the common privilege of everyone. But laws cannot accommodate every opinion. We are blessed to live in a democratic republic in which the will of the constitutional majority determines the law. So, although we are entitled to our own opinions, if we disagree with the law, we submit to it when we must, and we work to change it through persuasion when we can.

Moral privilege, though, is an exclusive prerogative to which corporate and cultural elites believe they are entitled. They believe that their opinions carry more weight than other citizens. They believe — to paraphrase George Orwell — that while all men may be created equal, they are just a little bit more equal than everyone else.

In Washington, D.C., we have witnessed a panoply of moralizing displays of virtue signaling. Politicians, reporters, and government agents have been tripping over themselves to contrast their own sterling characters with their caricature of President Trump.

Jeff Flake, Jim Acosta, Andrew McCabe, and James Comey, to name a few, have attempted to set themselves up as moral sages in this way. They have told us they have a “higher loyalty” to which they nobly sacrifice their interests for the sake of their conscience. They have made a killing on book sales, they have armies of social media followers, and they are respected by all the right people. Yes, their “principled” stand has cost them dearly.

Likewise, when the Georgia Legislature passed the heartbeat law, Hollywood elites swooned and declared they couldn’t possibly “in good conscience” continue to pursue their financial interests in Georgia if the law went into effect. Corporate representatives from Disney, Netflix, NBCUniversal, and WarnerMedia made similar threats after Gov. Brian Kemp signed the bill into law.

The latest blow came when comedian Tiffany Haddish canceled her show in Atlanta. She declared that because of the heartbeat bill, she could not “in good faith perform there.” Of course, she wanted us to believe her stance had nothing to do with her difficulty selling tickets, which were being peddled for less than half their original value.

The message from elites is clear: Only they have the privilege of putting moral over material interests. Georgians must do the opposite; they must heed the threats of the powerful and sacrifice their consciences for the sake of their pocketbooks.

What the elites are really saying is that Georgians must do as they are told and not be uppity. Georgians must give up the idea that they are actually self-governing and accept the new order, in which cultural elites and powerful corporations dictate to constitutional majorities what their laws will be.

But we live in a republic, and here, the people govern. Celebrities and corporations should understand that tax incentives and performance opportunities do not include the moral privilege to dictate their will to our legislatures.

It is the right of all men to hold a moral opinion and to sacrifice for it. But it is the esteemed privilege of all Americans to live in a country where our opinions carry a weight equal to that of the richest CEO and the most famous celebrity.

Clifford Humphrey is a Ph.D. candidate in the Van Andel Graduate School of Statesmanship at Hillsdale College. Follow him on Twitter @Cphumphrey.
Print