Cultural Depravity California,Drugs,Entertainment,Hollywood,Homelessness Hollywood Is a Horrifying Hellscape - The American Spectator | USA News and Politics
Menu
Cultural Depravity
Hollywood Is a Horrifying Hellscape
The Land of Make-Believe has been abandoned to its very real vices.
by Paul Kortepeter
Homeless man on the Walk of Fame, Los Angeles, California, January 16, 2016 (IVAN DANN/Shutterstock) 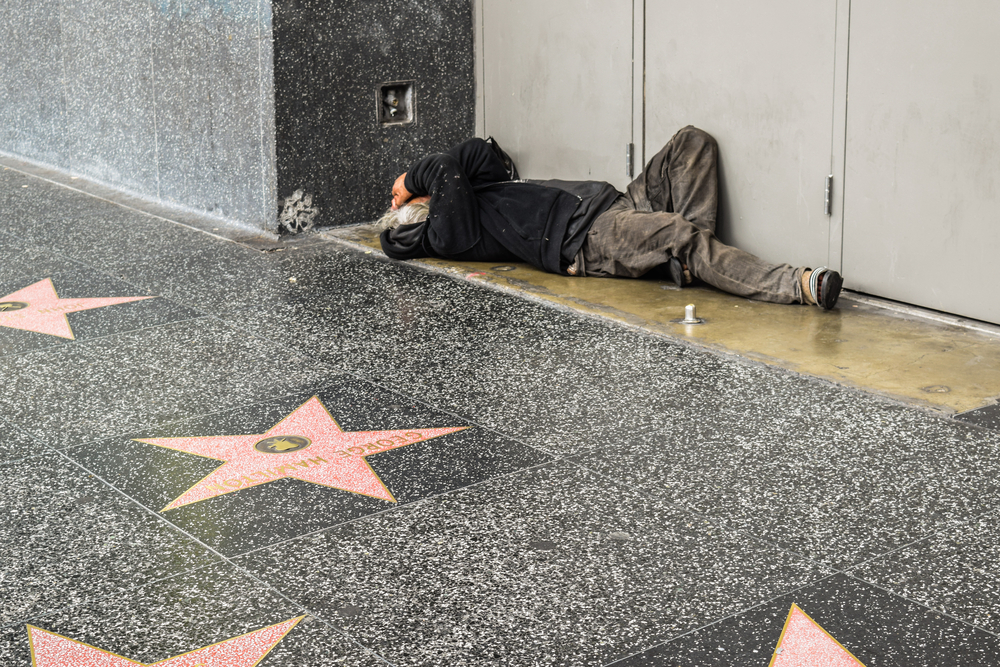 As the corpse went past, the flies left the pizzeria in a cloud and rushed after it, but they came back a few minutes later.

Somehow the corpse — a homeless man — was still on his feet, staggering down the sidewalk, flailing his arms. His hair and skin were coated with a layer of brown filth that gave off the intense aroma of urine and feces. He wore a tattered tuxedo jacket over his thin shoulders that might have been worn, in its prime, to the Academy Awards by one of the royals of Hollywood. The tux fit the homeless man pretty well, and would have made for suitable burial wear, but the corpse never bothered to lie down. He stopped in front of Ripley’s Believe It or Not! museum and started screaming at a family of tourists. The group was pink from the sun and had been debating whether or not to buy a ticket to the museum of oddities. They had come to Los Angeles from Abilene, Kansas, hoping to see streets of gold and gauzy, diffusion-filtered actors. They had heard Judy Garland singing about this city in A Star Is Born and Emma Stone doing the same in LA LA Land. As the corpse kept screaming, the tourists hastily coughed up the money. The freak show in the museum was safer than the freak show on the street.

In Hollywood, there are more freaks per square mile than anywhere in the world. I have seen enough of the world to feel certain that this is true. There’s a peculiar gravity to the place that causes the freaks to congregate here, especially as the sun goes down and the hot smog of the day becomes soft and powdery.

Hollywood Boulevard is the center of that gravity, especially on a Saturday night. Much of the seediness along the thoroughfare has been upgraded in the last 30 years, but there’s still a strip of the old freak show left that’s got nothing on Venice Beach.

It’s curious that such sorrow and disease would mushroom from a town whose name is synonymous with opulence and beautiful people.

A gang of bikers dressed in leather jackets stake out their turf on the sidewalk in front of a souvenir shop. A cross-dresser with neon lipstick skirts around them, swishing his butt in a tight evening gown. The bikers glower at the smooth-shaven creature under their thick, grizzled beards. They bark at him, but the cross-dresser merely tosses his faux fur back, blows them a kiss, and takes a haughty puff from his empty cigarette holder. That makes the bikers jeer. Down the street, teens dressed in “scene-wear” sport pink cargoes, yellow and purple hair, and anime eyes. Scene and emo have replaced the old-timey punks here, but these edgy kids are still looking to score a baggie of molly from a dealer who operates from a bus stop shelter. Nearby, under the garish Hard Rock Café sign, a Dianetics dealer entices lost souls to take a free personality test. A male goth wearing a Victorian velvet tailcoat and army boots snorts “Rip off” in passing. The Dianetics dealer says pleasantly in reply, “Jerk off.” The goth shoulders angrily past a ménage à trois of metalheads, vampire-complexioned band groupies wearing dog collars, and black Ts flying various jolly rogers. The anorexic woman in the middle is practically carried along by the two men on either side of her. Their long hair is tucked into their skin-tight denims. As a limousine with invisible millionaires or drunk ravers cruises by, one of the metalheads flips it the bird. He drops his middle finger quickly out of respect for the Chevy low rider that follows the limo, packed with gangsters. In the Chevy, mammoth speakers shake the surrounding buildings with gangsta rap, Chicano style. It feels like thunder without the rain.

The stormy, surreal vibe is heightened by movie marquees flashing like heat lightning in the dark: Thor: Love and Thunder, Jurassic World: Dominion, Lightyear. Every blockbuster at the Chinese Theater and El Capitan is a rehash. Nothing new under the moon. “What has been will be again, what has been done will be done again.”

It seems to me, as I walk down the sidewalk, that the freaks would be at war with each other if that were permissible. They belong each to their own tribe with their own look and their own rules. A hippie anachronism (maybe a UC professor) in sport coat, tie-dye, and sandals shuffles along like some comic-book version of Moses, but his mere existence elicits expletives from the bikers. And yet somehow, while gangs are killing themselves in earnest, peace prevails on Freak Street.

Maybe it’s because Hollywood is the Land of Make-Believe, and the freaks only come here to play-act. The sidewalk and the street are stages, and all the freaks have their exits and their entrances. Everyone here is playing a bit part in a B movie. It’s a common sight to see the freaks sitting on curbs or gathering at corners, laughing, toking, drinking, dancing …

A hooker in hot pants and a saxophone busker (nailing “Who Can It Be Now?”) deepen the effect of street cinema. And yet despair bleeds through the bravado. The hooker is maybe 15. Her pimp is a razor-toothed Doberman with a tattooed face and calloused paws. The busker looks to be dying of an opioid addiction. I start to imagine that this is a voyage of the damned, that the denizens of Hollywood are floating out to sea on the Raft of the Medusa. Some of the freaks look only months removed from becoming the walking, talking corpses that lie in dirty heaps on the side streets.

It’s curious that such sorrow and disease would mushroom from a town whose name is synonymous with opulence and beautiful people. The hucksters call it “the glamor capital of the world.” Ask anyone who hasn’t been here, and they’ll tell you it’s palm trees and fountains, mansions and convertibles, producers and directors, ingenues and leading men. Nothing could be further from the truth. Somewhere in the distant hills and beaches, the beautiful people do cavort and play. Not in Hollywood. This is the city that the movies birthed and then abandoned. It’s the beggar child of “the Industry.” It survives on the alms of cinema’s mystique. It behaves just as you would imagine life imitating art — self-absorbed, hedonistic, amoral art.

It is a moving sight to see tourists standing over the names of favorite performers along the Hollywood Walk of Fame, pointing their cameras like paparazzi straight down at the sidewalk. They have been cheated out of a decent vacation by the hucksters of Hollywood, and still they take pictures with gusto. In the face of terrible disappointment, tourists display heroic good humor. Even though they can’t walk down the sidewalk without dodging puddles of soft drinks, vomit, and spit, they focus on the name in the star. It becomes a game to try to find Woody Allen, Roman Polanski, and Veronica Lake. Underneath all the filth, the same color as filth on the walking dead, the sidewalk stars have the power to bring alive the beauty and excitement of the Hollywood hoped for, the Hollywood of the imagination.

As the sun rises over the tenements and bungalows of Hollywood, the freaks scatter for the shadows. Somehow Hollywood remains the spiritual center of the movie industry. And the moral preachments of Freak Street, fixed in the emulsions of digital celluloid, go forth throughout the world.

Paul Kortepeter is a writer and educator residing in Indianapolis.