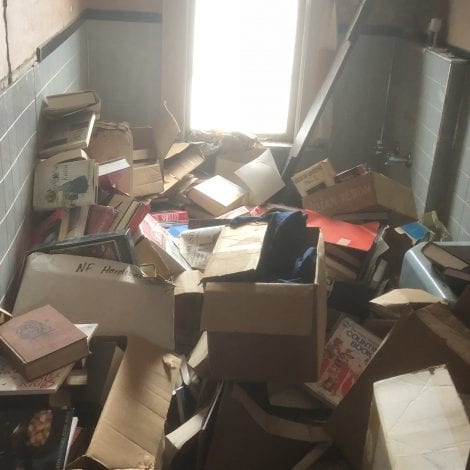 I spent a weekend earlier this month trudging through an untelevised episode of Hoarders.

The home lacked electricity. The bathtub overflowed with books. One could spy the attic through the holes in the second-floor ceiling and the sky through the roof. Stacks of magazines and gizmos and gadgets from an earlier era constantly bumped into me without so much as an “excuse me.” Behind the stove, a cache of 1981 newspapers peeked out of their hiding place. Amid the madness, a meticulous ordering of the former occupant’s life revealed itself on yellow post-it notes detailing a day’s mundane activities down to the minute.

I helped empty a hoarder house along with a horde of pickers the first weekend of March. This was a cleanout masquerading as an estate sale, and, as such, worked as the best sort of estate sale. The sellers eagerly let go of what the previous owner could not.

My acquisitions included dozens of Life magazine from the 1940s onward featuring the likes of Elizabeth Taylor, Rock Hudson, and the Aga Khan on the cover; twelve, framed, local-interest photographs, some dating back more than a century; a bruised and battered bowling pin; a chalkboard with character; and a Remington-Rand adding machine because, like, well, everyone nowadays needs a Remington-Rand adding machine. I paid $50 for the haul. 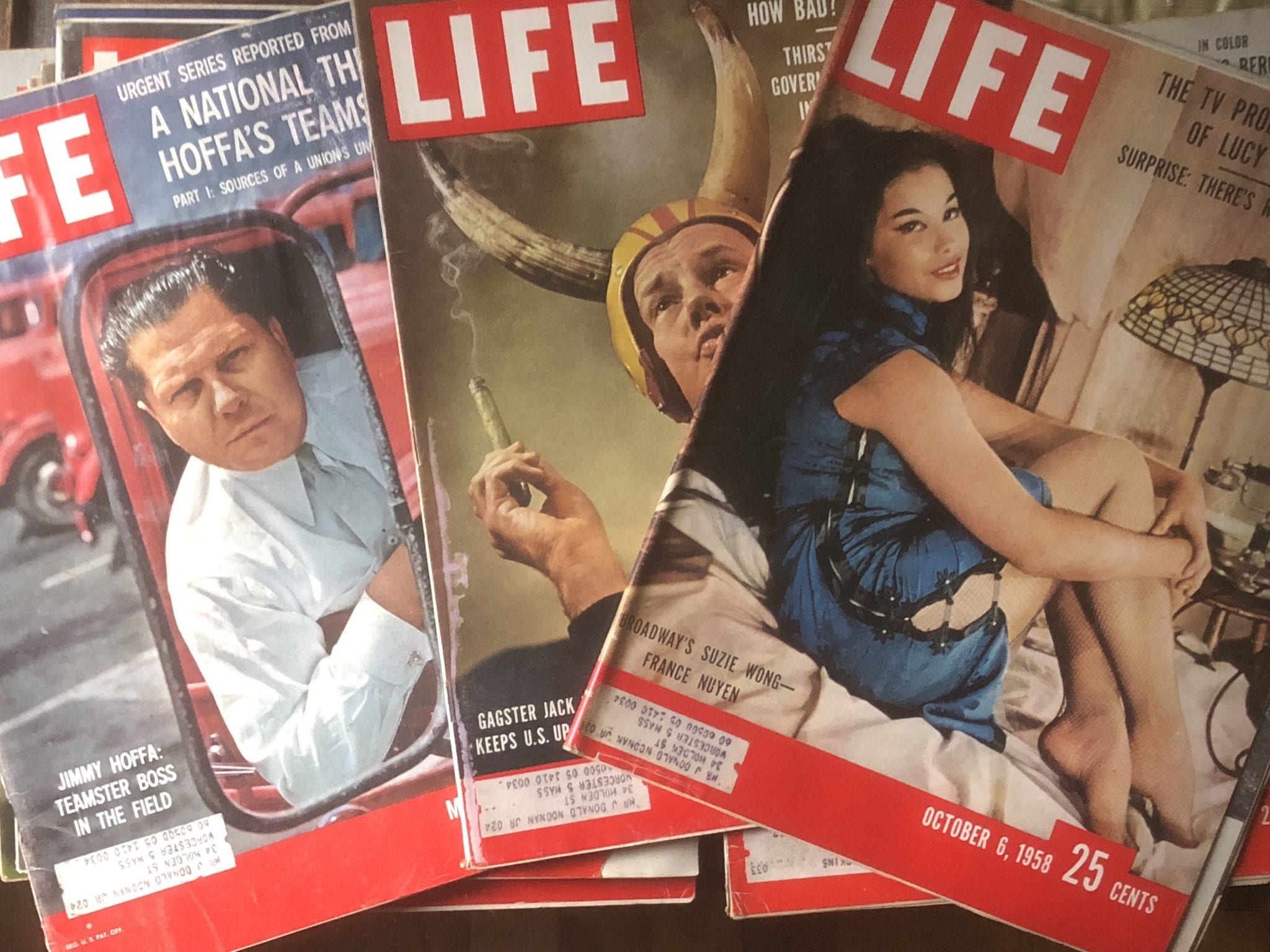 In November, a different cleanout company held an estate sale at the same location. I then purchased 11 framed photos and certificates for $70. A 42-inch yardstick photo of the 1912 graduating class of the Worcester Normal School — featuring Beautiful Bettys doing their best to look like Plain Janes — struck as the prize pick. One giggles at the ultra-conservative dress imposed upon fledgling teachers a century ago until confronted by periodic headline reminders of contemporary teachers, many of them ostentatious and attractive, taking too much enthusiasm in the mentoring aspect of their profession. On a rather ornate turn-of-the-century Boston grammar school diploma, a bug that scampered between the glass and the etching of Josiah Quincy on the parchment came without added cost.

We gladly paid for the deceased owner’s mental illness.

“I like to get into the psychology of why people buy what they buy,” Stephen McQuade of AMT Estate Solutions informed The American Spectator. “I like to watch that. I tell everyone when I go to a house, ‘Don’t throw anything away. You never know what’s going to sell.’ Some of the stuff I think is going to sell or the client thinks is going to sell doesn’t sell, and all this crazy stuff sells, in every house.”

He cites a “nasty rug” going for $150 as one of the pleasant surprises of the weekend.

McQuade initially refused the job. After more than a decade in the business, the house stood as the most unsightly salmagundi of belongings that did not belong that he had ever encountered. But after negotiating a flat rate—“I’ve never done that before”—and bowing out of the cleanout, he agreed to oversee the sale after the company that held November’s estate sale at the same property refused to come back.

Rob, a local builder, bought the distressed property for the right price. He sold the four garage doors for $500. He encountered me during an unauthorized venture into his off-limits attic as he peddled a railing to an interested party. Even the chopped-down tree hopefully reincarnates as tables — for a cost. He told The American Spectator, “I’ve tried to turn every single thing in the house into money.”

He says a well-to-do family once inhabited the grayish, two-story abode. After the entrepreneur father died, the family moved out — and his brother, and his stuff, moved in. “The brother got obsessed and bought every book he could find. He kept going and couldn’t stop.” The collection betrays no taste for a specific genre. Instead, one finds a snapshot of the publishing industry between the 1960s and the 1980s in a game of 52-pickup played with tens of thousands of hardbacks. The house remained vacant yet filled for decades. 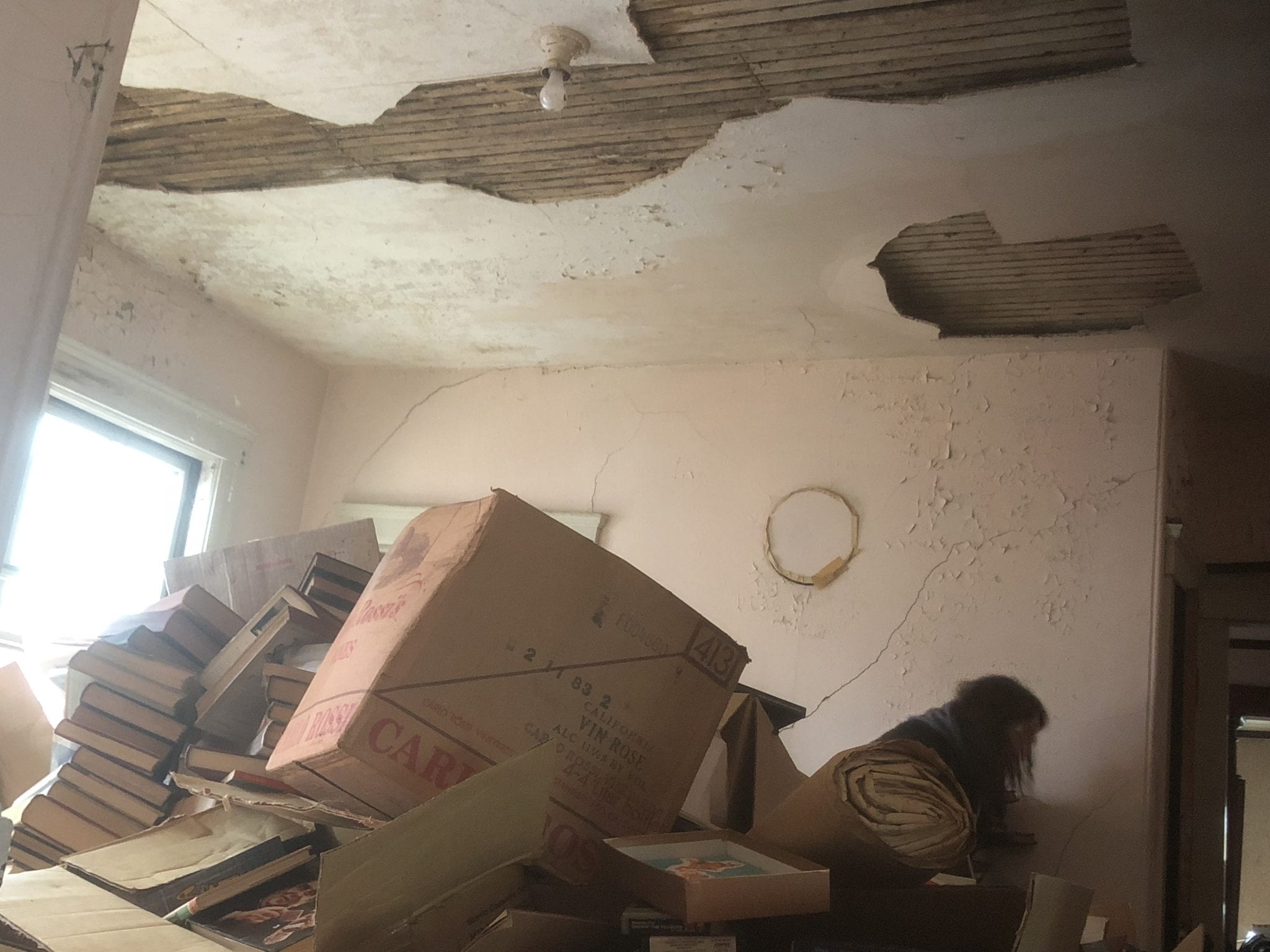 After 40 years of flipping houses, Rob never saw anything like the 114-year-old, 3,142-square-foot home that a mentally-ill man with money transformed into a repository for books, newspapers, magazines, and ephemera. “It topped everyone’s list in the business,” he explains. “Book dealers, hoarders, pickers—this topped all. I’ve seen bad. I haven’t seen worse.”

Still, he sees money in the mess and, especially, after the cleanup. One man’s trash, as the saying goes, ranks as another man’s treasure. But the man who once jealously guarded these possessions as though part of himself surely did not regard them as rubbish. Neither do those who traded cash for what so many others would discard as trash.

The fifth Diagnostic and Statistical Manual of Mental Disorders (DSM) names hoarding disorder as a specific mental illness. Estimates peg between two and five percent of the population as suffering from the disorder to some degree.

Dr. Omar Haque, a Harvard Medical School-educated psychiatrist who also boasts a Ph.D. from Brown University and works as an outpatient psychiatrist, describes hoarders as people who get “lost in details” to such an extent that they fail “to see the big picture.” When he sees hoarders as patients, they normally come by way of a court order, a pending eviction, or a family member “sick of tripping over 18 cats.” He describes the condition as related to obsessive-compulsive disorder (OCD) and notes that psychotherapy and certain medications can help people mired in the condition.

Dr. Jennifer Lish, a clinical psychologist serving the very area where the hoarder once lived, sees hoarding differently. The befuddlement that hoarder homes elicit in the laymen also besets medical minds. Perhaps finding the reasons for unreason necessarily makes for a fool’s errand.

“I was personally struck by how ineffective the effects of my treatment were as compared to the tremendous success with obsessive-compulsive disorder,” she told The American Spectator. “I did not have much success with people who were hoarding. My understanding was that nobody else did, either.”

She believes that people afflicted with depression, dementia, alcoholism, and various other maladies, rather than merely people with OCD, suffer from the hoarder compulsion.

When I raise the seeming clash between the OCD-like, micromanaged life indicated on the sticky notes with the disordered mess that surrounded it, Dr. Haque points out that what seems contradictory to the layman looks consistent to the trained eye.

Despite multiple estate-sale companies holding events in November and March attracting hundreds of people, the picker feeding frenzy, which so often results in the carcass of a collection reduced to its skeletal structure in a matter of hours, merely partly decayed rather than fully deteriorated the remains of a lifetime of gathering. And for the many scavengers contributing to the effort, the horrific sight, and the smells it masked, played as a cautionary tale. A fine line exists between the mess-maker and the unwitting maids paying to clean up the clutter.

“Maybe you need to go to a psychiatrist,” seller McQuade told me upon my fourth visit to the property. “I wouldn’t doubt that a lot of people who came here and bought some of this stuff have the same disorder because of the stuff I saw them buying.”

Projection, another term perhaps defined in the DSM, gets to the heart of the picker-gawkers who pay for what they mock. Do we look at a mirror, or at least a crystal ball, when we look at the mess?

My collecting in the year prior to the visit to the hoarder sale brought me a 1949 RCA Victor television with a nine-inch screen entombed in a heavy, 25×40-inch wooden console, a turn-of-the-century apothecary’s scale, red newspaper dispensers for the defunct Boston Phoenix, circa-1968 Teletronix C-30 series cameras, a 1950s Sports Illustrated magazine rack, a 1960s-looking hairdresser’s hairdryer with the cone above the seat, and more than fifty other scores on Craigslist’s “free” section, to say nothing of the items purchased at auctions, flea markets, yard sales, Brimfield, eBay, and other estate sales. At the hoarder house, a picker, wearing a leather jacket on his back and a Ricky Linderman look on his face, reacts gruffly, territorially when I offer cash for his Anton-LaVey-on-the-cover Life magazine amid the stacks he has just purchased in bulk.

The pickers appear to exhibit the same compulsion to acquire and anxiety surrounding abdication that the hoarder endures. As Dr. Lish explains, “All of us have a feeling about anything we have owned that is different from the feeling we would have about it if it were never ours.” And given that the collectors value what the hoarder values, the buyers marveling at the mess, or at least some of them, look at their future (or their present without realizing it). Does this make pickers hoarders, albeit perhaps hoarders in no hurry?

Surely professional advice is in order to unravel the untidiness. “The difference between you and the hoarder is you buy a limited quantity and you get rid of plastic yogurt containers,” Dr. Lish reassures. Dr. Haque informs, “It all depends whether it’s functioning for you or not, whether it’s inhibiting or not.”

All harmless habits become crippling cravings when untethered from control, discipline, moderation. The collectors indulged a hobby in the hoarder house. They also witnessed a cautionary tale about overindulgence. There but for the grace of restraint go us.

As Dr. Haque points out, “All psychiatric diagnosis is on a continuum with normal behavior.”