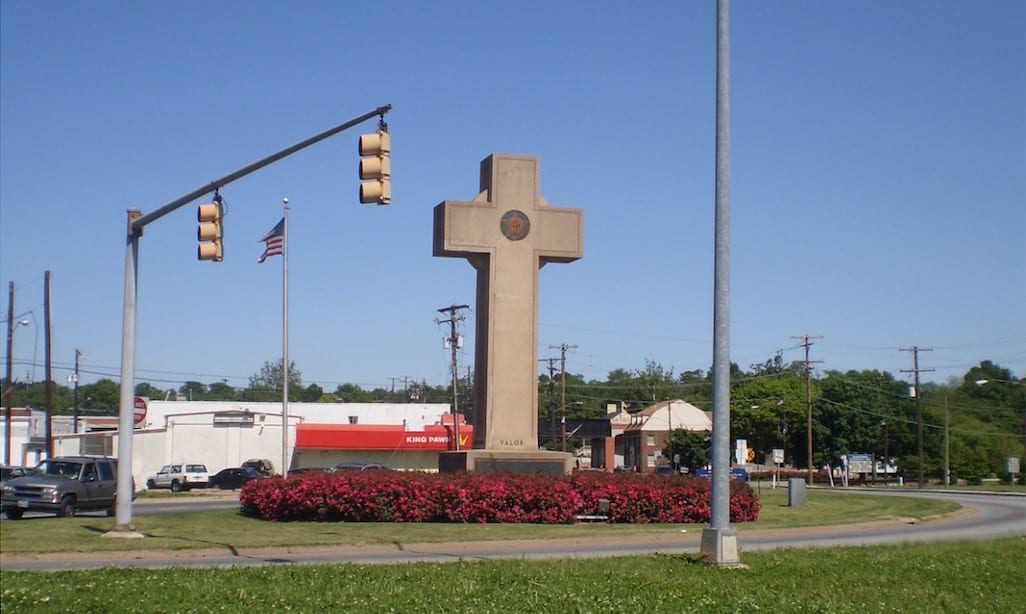 In the winter of 1917, Maryland resident Martha Redman said goodbye to her son William as he left her for the battlefields of WWI. He was killed in August, 1918 in Brittany. His remains were never returned to his mother.

Without her son’s body to lay to rest, Mrs. Redman conceived of a monument honoring all 49 WWI fallen soldiers from Prince George’s County. It would be on private land and built with money raised from citizens and politicians by other Gold Star mothers. In 1919, Martha personally broke ground for the Bladensburg “Peace Cross.” In a letter to her senator, she noted of her son, “our memorial crossishis gravestone.”

Now radical secularists are using the courts to try and destroy William’s “grave” and memorial to 48 other heroes, black and white, faiths unknowable.

Their ostensible reason is the Cross now sits on public land after a 1957 eminent domain taking. Their real reason is to destroy anything they perceive related to the God they don’t believe in but are nonetheless desperate to dispatch from view. Their motivation is something that fair-minded, patriotic people cannot comprehend.

This historical marker stood in silent dignity for nearly a hundred years until 2014 when the American Humanist Association (primarily atheists) filed suit alleging it violates the Establishment Clause of the First Amendment which prevents government from establishing religion.

But the government didn’t establish the Peace Cross — Mrs. Redman and the people of Bladensburg did. Nor does it commemorate religion.

A Maryland district court ruled in favor of the cross in November of 2015 calling it a historically significant secular war memorial, but an appellate court later ruled against protecting the memory of the county’s WWI dead.

The Legion appealed the case to the Supreme Court where it will be heard on Wednesday, February 27.

Area resident Renee Green created the “Save the Peace Cross” organization in 2014 and entered the Cross in the National Register of Historic Places, which should theoretically have stopped the lawsuit in its tracks. That same year, Ms. Green did a video interview with atheist Fred Edwords of the AHA. With the cross standing peacefully behind him, Edwords provided a number of opinions both remarkable and disturbing.

He claimed to be “offended” by the monument knowing it ended up on public land. Then he admitted he could not name a single one of the 49 men listed on it. These are men who gave their lives, like many others, to allow Mr. Edwords the freedom to publicly diminish their sacrifice and the grief of their families in front of a memorial to that very sacrifice.

Perhaps the most ironic comment from Edwords was “the American Humanist Association is a voice for the voiceless.” Apparently not for William Redman and the others on the Cross who lost their voices in the service of their country.

When community grief over the loss of a service member starts to fade, and the military burial is just a memory, what is left to remember their sacrifice but a monument erected by loved ones and neighbors? All timeless American military monuments reflect the culture and ethos of the time in which they were created, and in 1918, this community agreed it was a cross.

A successful lawsuit by the AHA would not just erase history and a beloved community landmark, but also the memory of those commemorated on it.

My own son is an officer in the United States Army so I am a Blue Star Mom. I live with pride and fear every day and surely never want to be a Gold Star Mom — it’s painful to even imagine the grief. If unspeakable tragedy struck my family and someone tried to tear down a memorial to my son, I would chain myself to it and dare the thoughtless and unpatriotic to pry me off with the best John Deere has available.

The WWI Gold Star Moms of Bladensburg have long passed and cannot fight this desecration with their physical presence. We who are here now must do it for them.

It appears no one is less humane than these humanists, and their attacks on veterans’ monuments cannot stand. The Supreme Court must ensure that the monuments will.

It is the Peace Cross. It should be left in peace.