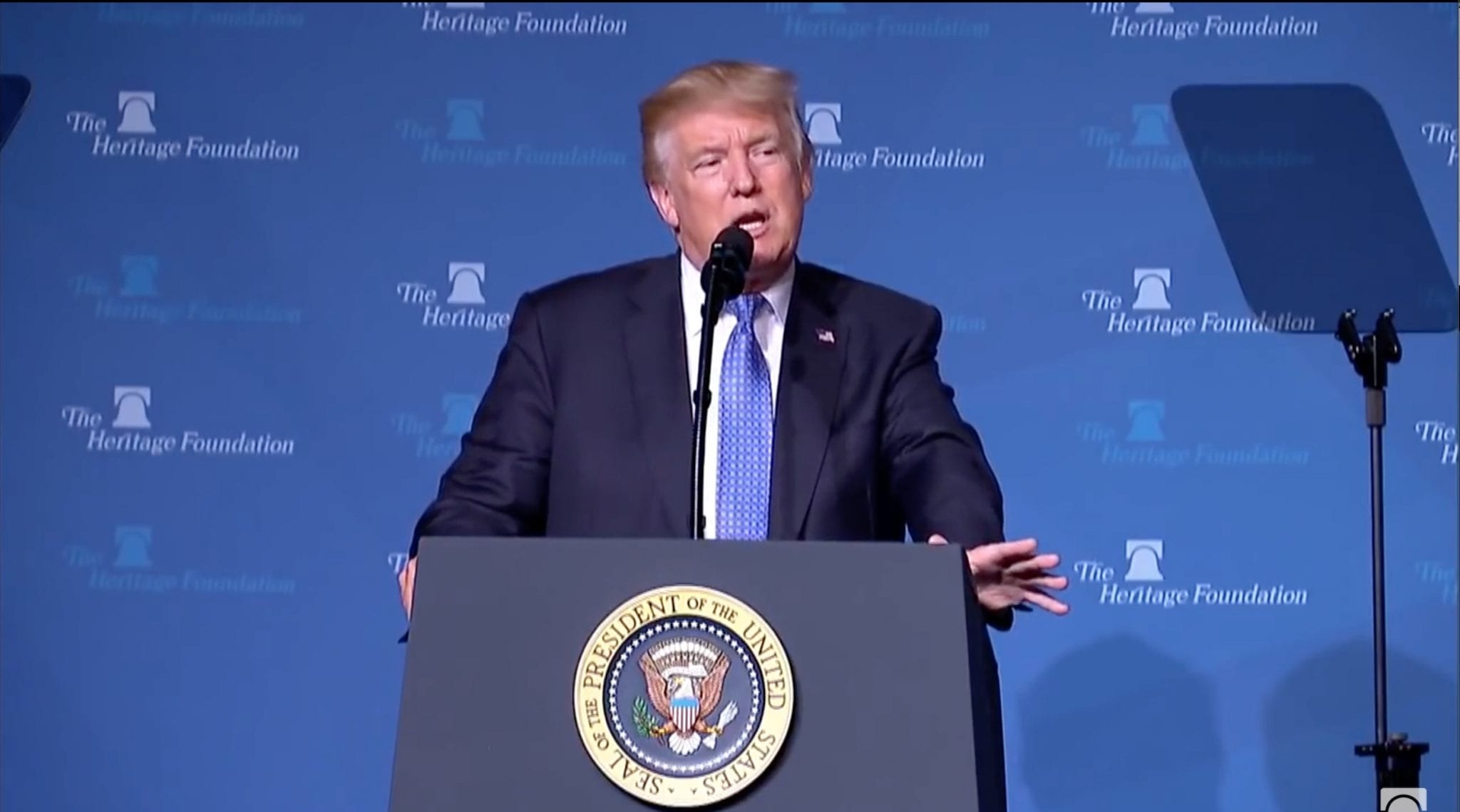 The Heritage Foundation has released its annual ranking of economic freedom in 180 countries — and there is good news for America in the Trump era. Heritage reports:

The United States managed to halt its recent slide, recording a score of 75.7, more than half a point above its 2017 score (its lowest score in Index history). Ranked No. 18 globally, it remains “mostly free” and rose in the regional rankings, thanks in part to a 1.3-point decline in Chile’s score, to become the second-freest economy in the Americas region (behind Canada, which dipped to 9th place globally). “The decade-long decline in America’s economic freedom may have been halted,” the editors write.

Catch that last line? The U.S. is recovering from a “decade-long decline in America’s economic freedom.” Hmmmmm. And just who might have been in charge of the U.S. during that decade?

Yes, that would be someone — a presidential someone — who believed if the government took over one-sixth of the U.S. economy it would be a whiz-bang triumph! And… clearly… not. Shocking. Not.

The Heritage Foundation is itself a beacon for freedom. Founded in 1973 by three heroic conservative souls (Paul Weyrich, Ed Feulner, and Joe Coors) who had grown tired of the GOP elite’s (read: Nixon administration) embrace of what was called in the day the “liberal consensus.” As was noted by the late literary critic Lionel Trilling, “liberalism is not only the dominant but even the sole intellectual tradition… there are no conservative or reactionary ideas in circulation.” The Heritage Foundation changed this — big time.

The conservative movement had already begun to ferment with challenges to this “liberal world order” in the person of a young William F. Buckley, Jr. and his National Review magazine. By 1964 Barry Goldwater had captured the GOP presidential nomination — and while he was defeated in an LBJ landslide, Goldwater’s real victory was to energize conservatism for the future. A future that would include the actor Ronald Reagan, who two years later would be elected Governor of California in a million vote landslide — with more to come.

But without doubt it was the founding of the Heritage Foundation in 1973 that began to form a solid institutional and intellectual grounding for conservative principles. The Foundation’s central purpose is stated thusly:

Free enterprise, limited government, individual freedom, traditional American values, and a strong national defense—promoting these principles is the mission of The Heritage Foundation, which we fight for every single day.

This purpose is perfectly illustrated with the release today of the Heritage 2018 Index of Economic Freedom. Heritage describes the Index this way:

Much controversy was had recently with the allegation that President Trump had supposedly said various countries were “s…holes.” Whether he did or didn’t say it, the Heritage Index can help explain why some countries succeed and others fail. The reason is simple: freedom — and in particular economic freedom. The more economic freedom — the better the economy. Here is Heritage on its results:

The world economy is “moderately free,” with another rise in economic liberty leading to a sixth annual global increase, according to the editors of the 2018 Index of Economic Freedom, released today by The Heritage Foundation.

Among the 180 countries ranked, scores improved for 102 countries and declined for 75. Only three remained unchanged.

“Thus, a total of 96 economies—more than half of all nations and territories graded in the 2018 Index—provide institutional environments in which individuals and private enterprises benefit from at least a moderate degree of economic freedom in the pursuit of greater economic development and prosperity,” the Index editors write.

Per capita incomes are much higher in nations that are more economically free, the Index editors note. Economies rated “free” or “mostly free” in the 2018 Index enjoy incomes more than double the average levels in other countries, and more than five times higher than the incomes of people living in “repressed” economies.

Take note of that last paragraph (bold print supplied). It does, of course, make perfect sense. Individuals in an economy do better when the nation in which they live is on the higher end of the scale of the economically free.

Take note of two stories that are now out and not from Heritage. The first from the Washington Free Beacon in December is headlined:

Trump Cuts 22 Regs for Every New One

The administration has cut 22 regulations for every new rule introduced, President Donald Trump announced at the White House Thursday.

Agencies and departments issued 67 deregulatory actions and imposed only three new rules in fiscal year 2017, according to senior administration officials. The number far exceeded Trump’s goal through his executive order to cut two old rules for any new regulation proposed.

And over here is this from MarketWatch:

How fast is the U.S. economy growing?

Most estimates say that, for the first quarter, growth is in the region of about 2.6%. But the Atlanta Fed’s GDPNow model says that first-quarter growth may be an eye-popping 5.4%.

In other words, while not using the Heritage term, both stories are talking about what happens when there is an increase in economic freedom. Over at Grover Norquist’s Americans for Tax Reform is this:

At least 300 companies have announced tax reform bonuses, pay raises, or 401(k) hikes, according to a running list compiled by Americans for Tax Reform, found at www.atr.org/list

In their own words, here’s what Americans have to say about their tax reform bonuses and pay raises:

“I’ve got a vehicle I’m trying to get ready for my daughter. She needs transportation, so it [bonus] will help me out in that instance very much.” [Link]

“I’ve never really had anything like this happen before,” said 24-year-old Brian Robertson, a mover with Broadway Express. “It’s the first job I’ve ever had to get any kind of bonus or anything.” [Link]

“We’ll be able to pay more bills,” said Rich Stoddard. “We might be able to go out for dinner. Do the little things we might not be able to do until this kicks in. Honestly, your paycheck, you know where it’s going even before you get it. Now we have a little extra.” [Link]

“I’m very grateful for the bonus and raise I received,” said Shawn Joy, who has worked as an applicator/operator at the business for about five years. [Link]

Hair stylist Breitanya Williams spent part of her bonus fixing the taillights on her Buick Rendezvous — the only vehicle she and her husband own that will fit all four of their young children. Another portion of Williams’ extra money went toward subscribing to a workout program. “That’s like my life-changing part,” said Williams, 25. “I just had my fourth child in five years … (and I’m) trying to make my family and myself healthier.” [Link]

Williams’ colleague Laura Naven also put her bonus toward her family. She paid down hospital bills left over from when she gave birth to her 4-month-old and put some money into savings. “I have two kids, so building up the savings is key right now,” said Naven, 33, general manager at Five Senses. [Link]”

And in regard to other countries? Here’s the Index list of the Most Free and Least Free:

Note well the United States after eight years of Obamanomics is not in that top ten of the “Most Free,” but number 18. Let’s see what happens a year from now.

What the Heritage Foundation has accomplished with this Index is nothing short of a serious reminder to anyone paying attention that whatever else occurs in the Trump era, once again Americans — and anyone around the world paying attention — will be re-learning the vital necessity of economic freedom.

And for those who don’t learn the lesson? As in that list of the ten “Least Free”?