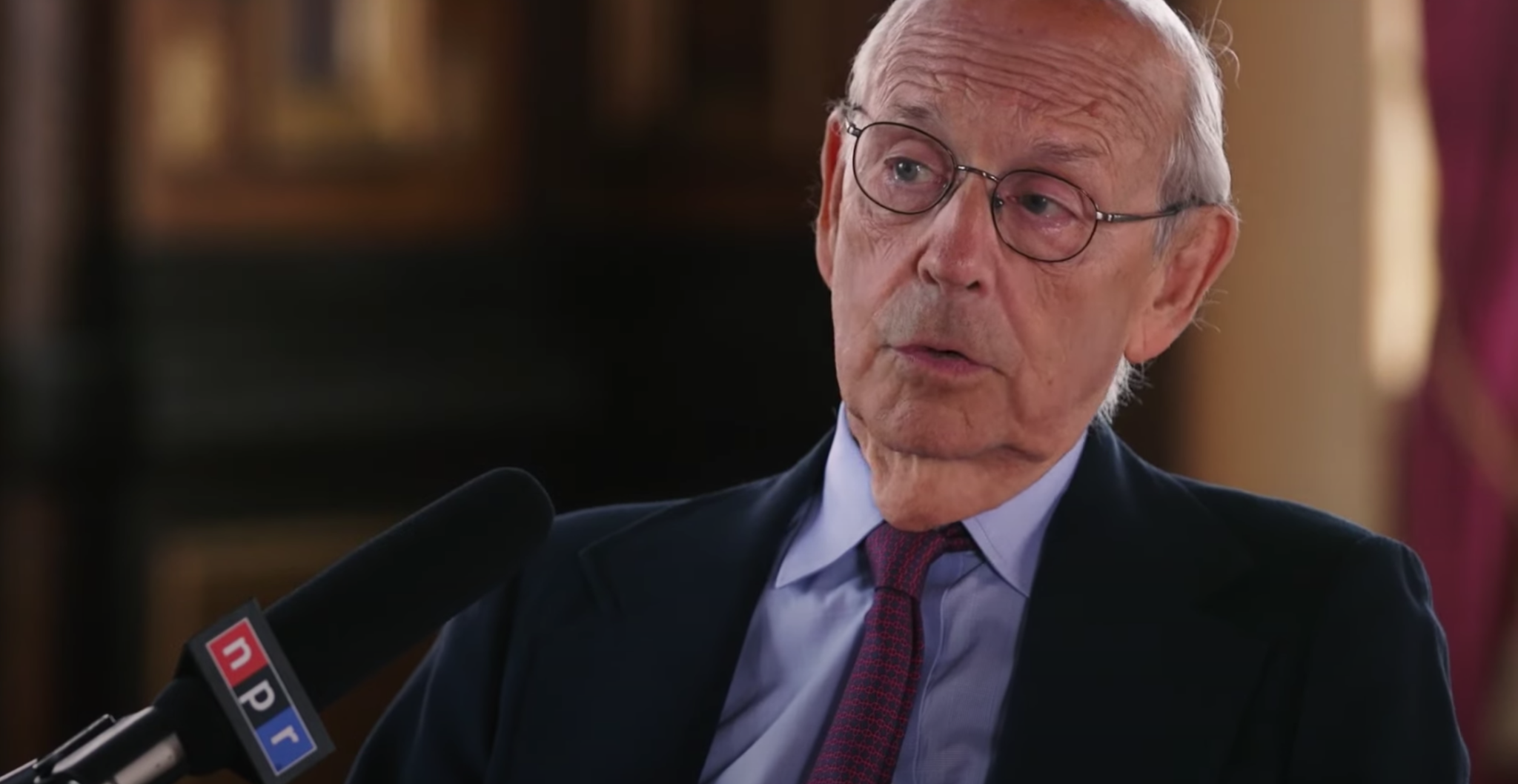 Poor Justice Stephen Breyer. A reliable liberal — or “progressive,” to use current parlance — vote on the Supreme Court since 1994, he is resisting efforts to shove him off the bench. And it is his professed friends who are doing the pushing.

Surprisingly, it isn’t because he violated a sacred “woke” norm of some sort. Rather, it is his age, 83. He seems in good health today, but what if Democrats lose control of the Senate next year? Or worse, Republicans reclaim the presidency in 2024? Then if he retires or dies, he might be replaced by another Amy Coney Barrett, creating a 7-2 rightish majority. Across America, left-wing legal paladins would descend on Washington to commit ritual seppuku in front of the Supreme Court building.

Although I wish the legal left no ill will, such a spectacle would be fun to watch. Yet the Left has no reason for complaint. A mix of Democratic hundred-percenter and Republican fifth columnist appointees created a strong activist liberal court in the 1960s and 1970s. The problem was not that all their policy prescriptions were wrong. The error was that they constantly acted like legislators who mandated their preferred policy prescriptions.

The apogee of progressive jurisprudence was Roe v. Wade. At the time, the ruling was dramatic, overturning every state abortion law in the nation, and controversial, especially among legal scholars for having been made up essentially out of whole cloth, with a foundation of constitutional “penumbras” and “emanations.” One of the most brutal critiques of the ruling came from a liberal, Yale’s John Hart Ely, who opined that the ruling was “bad because it is bad constitutional law, or rather because it is not constitutional law and gives almost no sense of an obligation to try to be.”

Since then, the judicial wars have intensified. In 1980, Democrats claimed that presidential candidate Ronald Reagan had a “litmus test” for court appointees of opposition to Roe. Today, Democrats unashamedly insist that all judicial nominees should not just follow the abortion decision but embrace and even celebrate it. As the Supreme Court shifted toward the center, judicial progressives radicalized, demanding that one of the most extreme and superficial decisions be treated as foundational law, a super-duper precedent, something that no intelligent, decent, or sentient human being could ever question.

Oddly, Roe became wokedom’s supreme symbol while diminishing in practical impact. That is, even if the ruling is overturned, most Americans will have access to abortion. The New York Times figured that “In more than half of states, though, legal abortion access would be unchanged.” And in a country without restrictions on interstate travel, residents of states where abortion is restricted could go to one where abortion remained legal. This would be a barrier to some, but hardly something out of the Left’s phantasmagoric The Handmaid’s Tale, or worse.

However, fearful that an honest Supreme Court might overturn the dishonest decision, the Left is desperate to win back control of the judiciary, and the starting point is not to “lose” any more progressive spots. Although venerated as a secular saint, Ruth Bader Ginsburg rejected liberal pleas to retire while Barack Obama was president. Which opened the bench to Barrett.

So, engaging in shameless “agist” discrimination, the Left has targeted Breyer. He is the subject of similar requests, which sometimes sound more like demands. However, Breyer doesn’t sound like he is ready to sit in a rocking chair until his story ends. He publicly criticized court-packing schemes, issued a book of talks and articles, and hit the media circuit.

In an interview with the Wall Street Journal, he assured the Left that he understood their concerns. However, he doubted their methods, including expanding the high court. He allowed that “I don’t want to die there on the court, so I probably will retire at some point.” But not yet: “There are a lot of different considerations, including health and also including the institutional role of the court and so forth. I’ll take those and other things into account.”

The standard court-packing proposals would undermine republican government, as progressives correctly argued when the Right targeted the activist court a half-century ago, even advocating impeachment of liberal justices. Today, left-wing activists pose as defenders of democracy while lionizing a case which voided every state abortion law in the country. Their jurisprudence increasingly reduces to the simple demand, “Treat what we want as law!” Unfortunately, court-packing and other attacks on judicial review would destroy the judiciary as a bulwark for individual liberties and against state aggrandizement.

Demands on individual justices to retire for political and partisan reasons are no less pernicious. And it is not just Supreme Court justices who may end up on a target list. After Joe Biden’s election, progressive legal activists compiled a list of some 100 lower court judges deemed members of the liberal team and at retirement age. The not-so-subtle hint: they should clear the way for younger candidates.

Life-time appointments ensure independence. Pushing retirement to manipulate nominations politicizes judges and invites the other side to do the same. The campaign treats jurists like legislators; parties typically feel entitled to fill vacancies with fellow members. And the rhetoric encourages judges to think in more partisan terms, including the “team” to which they belong and the state of politics, particularly the partisan balance at both ends of Pennsylvania Avenue.

Of course, political realities cannot be wished away. Members of both parties who believe in an independent judicial branch should come together to develop balanced reforms to reduce the political and partisan temperature of the high court. An omnibus constitutional amendment could address the most important partisan complaints.

First, replace life tenure with fixed terms for Supreme Court justices. Do the same with appellate court judges, since their verdicts often end up being the final say. (There are few complaints about the partisan composition of the more numerous trial judges, who have far less opportunity to make up new law.) Terms would avoid macabre death watches and spread appointments among presidents and parties.

Second, fix the number of Supreme Court justices. The current membership of nine seems adequate and would be easiest to set, since it would give neither party the advantage of nominating the new members. This change would prevent a partisan power grab, as attempted by Franklin Roosevelt and proposed by a gaggle of leftie legal minds.

Third, rotate the chief justiceship every term by lot or other criterion. This change would significantly expand the diversity of those who hold the highest judicial office. Sharing the position among more justices also should shrink any partisan differences.

Fourth, ease the requirements to amend the Constitution. Changing the nation’s fundamental law shouldn’t be easy. Nevertheless, the Founders made the process too difficult, encouraging people to treat the Supreme Court as a continuing constitutional convention, able to pass amendments by a simple majority vote. That responsibility should be shifted back to the political process.

Obviously, none of these steps would be a panacea. However, collectively they should help moderate the judicial wars. The effort is worth a try.

The most difficult problem, the dominance of “make-it-up” jurisprudence, would remain. If laws and constitutional provisions do not mean what they were broadly intended to mean, which requires study of text and history, then they mean nothing, anything, or both at the same time. In Roe, the justices interpreted the Constitution as they thought it should be understood, not what anyone drafting or approving the cited provisions would have believed. With this approach, even the most important liberties are secure only so long as they enjoy the support of a majority of court members, irrespective of what the Constitution says.

If justices admitted the truth, that they were making up the law, the public would see them as robed politicians and the Supreme Court’s credibility would tank. So even lefty jurists maintain the pretense that the text is relevant to their opinions. Conservatives have sometimes deep differences with each other, but they still are attempting to discern the meaning of the law as intended by those who made it.

Breyer appears to be in no hurry to leave the Supreme Court. Indeed, left-wing pressure might make him more stubbornly cling to his seat. However, his spat with lefty activists offers a worthwhile reminder that Congress should consider reforms to depoliticize the appointment process. Now, with no high court nominations imminent, would be the best time to act.

A graduate of Stanford Law School and member of the California and D.C. bars, Doug Bandow is a former Special Assistant to President Ronald Reagan. He is the author and editor of several books, including The Politics of Plunder: Misgovernment in Washington.