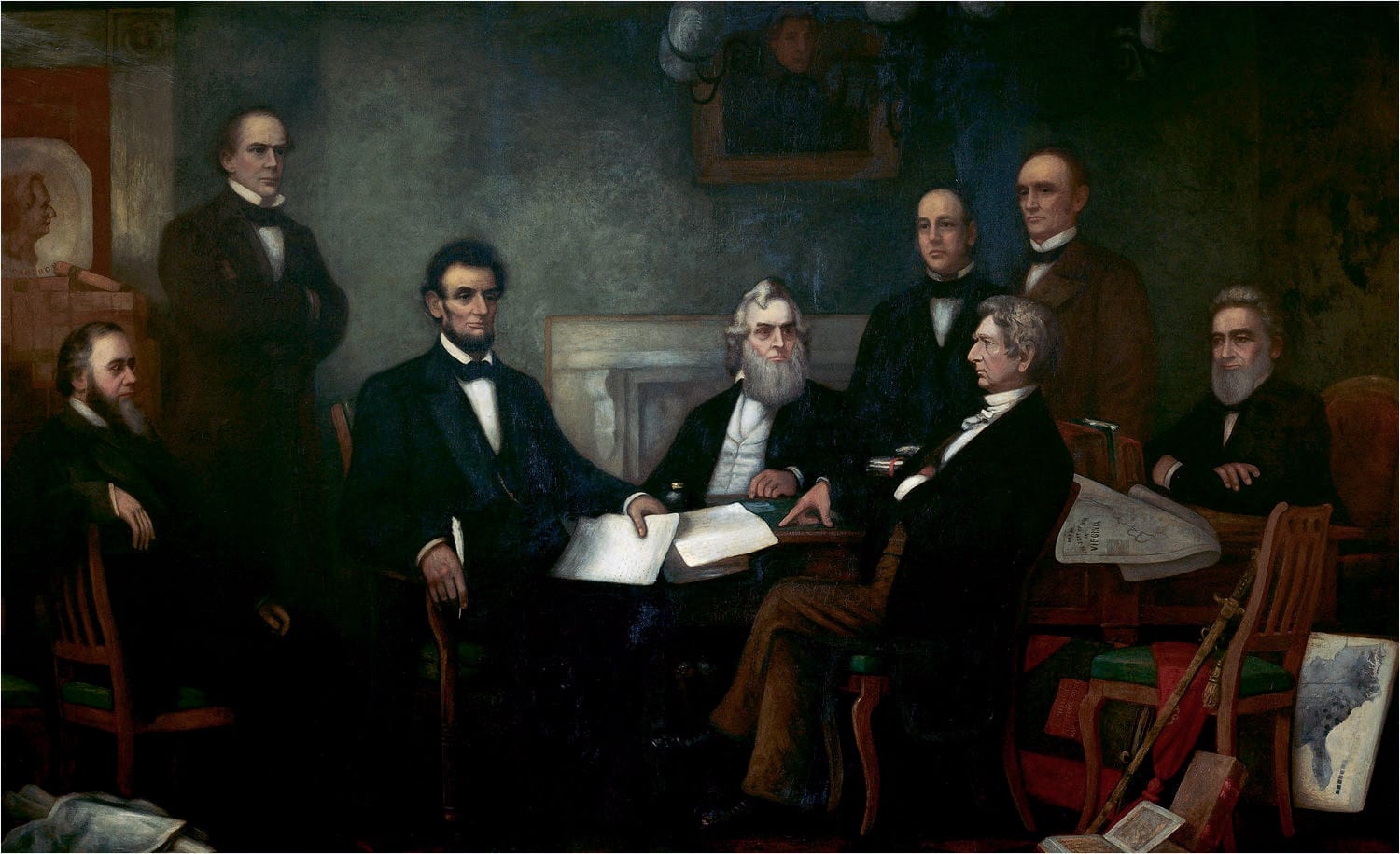 His actual birthday (number 209!) as opposed to the ceremonial “President’s Day” of next week in which, for the sake of a three-day weekend, Old Abe and George Washington (celebrating birthday number 286 on the 22nd!) are shoved together, robbing each of their respectively unique annual moments in the American sun.

So it is fitting to take a moment amidst the turmoil of this week in the 18th year of the 21st century to recall a central fact of Lincoln’s presidency as noted by the historian Doris Kearns Goodwin in her book Team of Rivals: The Political Genius of Abraham Lincoln, a classic about just how Lincoln made use of the better known rivals he had defeated for the presidency as he went about the task of saving the Union — and not incidentally ending slavery. When it came to dealing with racism, Goodwin wrote, Lincoln hoped to “‘penetrate the human soul’ until…‘all this quibbling about this man and the other man — this race and that race and the other race being inferior’” was extinguished.

Sad to say Lincoln’s old nemesis of racism is still around in America’s fourth century, still alive and well in the bloodstream of one the two major political parties. With every intention, so it seems, of using it to divide Americans in perpetuity. Example? Look no further than House Democratic Leader Nancy Pelosi’s recent eight-hour marathon, reported as follows, bold print supplied:

House Minority Leader Nancy Pelosi spoke for a record eight hours on the House floor Wednesday, urging lawmakers to take up a bill on the Deferred Action for Childhood Arrivals (DACA) program.

The marathon address included many stories from Pelosi (D-Calif.), including one in which she said her 6-year-old grandson once wished that he was Hispanic on his birthday.

Pelosi explained that the child had “a very close friend named Antonio,” who was from Guatemala.

“This was such a proud day for me because when my grandson blew out the candles on his cake, they said, ‘Did you make a wish?’… He said, ‘I wish I had brown skin and brown eyes like Antonio.’ So beautiful, so beautiful. The beauty is in the mix,” she told her House colleagues.”

This is the same Pelosi who days earlier had said this of President Trump’s immigration plan: “Let me just say what I said last night: that plan is a campaign to make America white again.”

In other words, the abomination of racism that Lincoln so actively fought in his successful effort to save the Union is still very much alive and well in the very same political party Lincoln faced off against in his early career and finally throughout his presidency.

And what was in that 1856 platform that the Democrats of 1860 saw as “unchangeable in their nature…”? (Note: The capitalization of the last sentence below is from the original.)

In other words? In other words what we have here is Nancy Pelosi showcasing a full 158 years later exactly what the 1860 platform of her party made clear. Racism, as thick as one can cut it, was a Democratic Party principle and “unchangeable.”

Lincoln would have recognized Pelosi and her party instantly. Old Abe, who went to such great lengths to do his part to end once and for all “this quibbling about this man and the other man — this race and that race and the other race being inferior’” would doubtless be appalled at today’s liberal obsession with identity politics, which is exactly what he was doing his best to end once and for all.

A few months before his own death in 2009, the late Jack Kemp penned a birthday tribute to the man he always reverently called “Mr. Lincoln.” The column appeared in Townhall and says, in part, this:

Few leaders in history have captured the hearts and minds of so many people in so many nations as Abraham Lincoln. He is so universally revered that he sometimes seems as much a president for the world as for our own country. From Springfield, Ill., to Warsaw, Poland, from Red Square to Tiananmen Square, Lincoln is an inspiration.

There is a very logical “global” extension of Lincoln’s view of the “American idea” — that the principles enunciated in America’s Declaration of Independence are universal, and that freedom is not just for some people, but for all people, and not just for one time, but for all time.

These ideals were the driving force behind Lincoln’s life and his political career. The Declaration of Independence was so central to his politics, and so close to his heart, that in the bleak winter of 1861, on his journey from Springfield to the inauguration in Washington, he felt he had to stop at Independence Hall in Philadelphia.

… He believed that the American system of upward mobility was the bedrock of our democracy, that no individual is excluded from the American Dream and that poverty is not a permanent condition. And, like the story of the “Good Shepherd” from Hebrew and Christian scripture, he believed we must move forward, but not leave anyone behind.

Slavery was the first great test challenging the American democracy’s central principle of equality. Lincoln’s moral indignation over slavery was unbounded. In his 1854 Peoria speech replying to the little giant, Sen. Douglas, he said:

“I hate… the monstrous injustice of slavery itself. I hate it because it deprives our republican example of its just influence in the world — enables the enemies of free institutions, with plausibility, to taunt us as hypocrites — causes the real friends of freedom to doubt our sincerity, and especially because it forces so many really good men amongst ourselves into an open war with the very fundamental principles of civil liberty — criticizing the Declaration of Independence and insisting that there is no right principle of action but self-interest.”

To Lincoln, slavery was an abomination, a hideous stain defiling the nation’s soul; it could only be cleansed by a baptism of fire in civil war.

… On the eve of the bicentennial celebration of Abraham Lincoln’s birth, and 145 years after his Gettysburg speech, Lincoln’s belief that all human beings are created equal and endowed with inalienable rights — the faith upon which liberal democracy is based — is still the last, best hope of people around the world.

As usual, Jack Kemp (full disclosure: my boss at HUD) got it right.

The tragedy is that all these 158 years after Lincoln’s election the abysmal — tragic — belief in exploiting judgment-by-skin color is still at the core of the political movement that Lincoln fought and that almost ended the nation.

Which is why celebrating Lincoln specifically and not washing his legacy into some mishmash celebration of presidents in general is important.

Abraham Lincoln’s legacy — a conservative, Republican and uniquely American legacy as Jack Kemp well knew and endlessly spoke of — is at the core of the GOP. And the very antithesis of the American Left.

The GOP today still faces off against Abe Lincoln’s old enemy of those who insist on judging others by race. Never for a second should that be forgotten. But in the meantime?

Happy Birthday, Abe! And thanks.