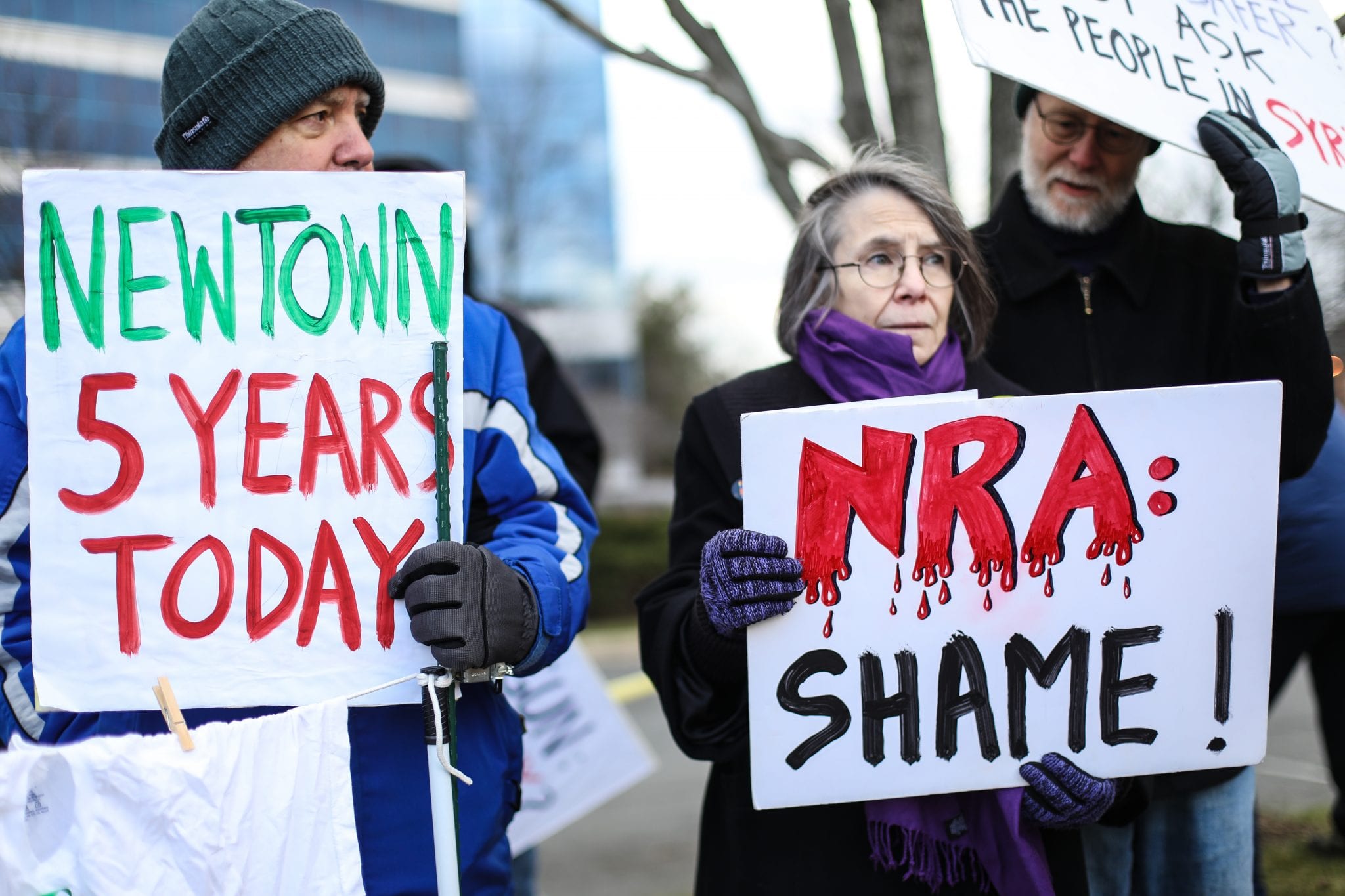 As the $90-plus million release of IT: Chapter Two proved last weekend, America loves scary clowns. But when you consider that four of them — Bernie Sanders, Lizzie Warren, Joe Biden, and Kamala Harris — all beat President Trump in the latest polls, it’s not fun: it’s just scary.

All four, and the others still in the race competing for the Dems’ vice-presidential nomination, are obsessed with making it much harder — and in some cases impossible — for Americans to lawfully possess and use firearms.

All four would revive the federal ban on sale of “assault weapons” — whatever they are — and impose universal background checks on gun sales. And it goes downhill from there.

Ol’ Joe’s latest gaffe — he said he’d ban magazines that hold multiple rounds — probably wasn’t a serious proposal, but with Ol’ Joe who knows? The butter is slipping off his noodles.

A few days ago, Harris said that the forced surrender of semi-automatic rifles to the government, for which the government would pay the gun owners, is a good idea.

Both Fauxcahontas and Harris have promised that they’d issue executive orders on gun control within their first 100 days as president if Congress doesn’t give them what they want (presumably on an assault weapons ban and a lot more). And, of course, Warren has the most detailed assault on the Second Amendment in her plan.

Warren’s plan includes a federal licensing system for all firearms (presumably including a national firearms registry), a limit on the number of guns a citizen can purchase (annually? forever?), a ban on magazines holding more than ten rounds, and repealing firearms manufacturers’ legal immunity from product liability lawsuits, thereby giving plaintiffs’ lawyers an easy path to driving them out of business in the United States.

The fact that none of these initiatives will stop mass murders with firearms or lessen their number isn’t relevant to the Democrats.

When he was Obama’s chief of staff, Rahm Emanuel revealed one of the main theories of liberal government when he said, “Never let a crisis go to waste.”

There are two underlying (and unspoken) predicates to that theory. First, if there is no crisis, invent one. Second, it is inadmissible to propose any solution to the crisis — regardless of whether it can possibly work — that doesn’t limit Americans’ personal freedoms and increase the power of government.

We do have a crisis, and it’s not new. Mass shootings go back at least as far as 1966 when a man killed 14 people from his sniper’s post atop the University of Texas tower in Austin. The two recent shootings in Texas and one in Ohio are only the latest examples.

But this crisis wasn’t brought about by lax gun laws. It’s a crisis brought about by the bad laws and policies imposed by liberal governments. You have only to look at Chicago and Baltimore — two cities, governed for decades by Democrats, that have extraordinarily strong gun laws — to see the horrific murder rates that the liberals bring about.

Let’s be very clear. Universal background checks won’t stop mass murders. People such as Adam Lanza, the Newtown school shooter, won’t be stopped by them. He stole his AR-15 type rifle from his mother and killed her before murdering 25 others at the Newtown school.

The shooter in the recent Dayton, Ohio, murders used a legally purchased weapon. The rifle used in the Midland and Odessa, Texas, shooting was reportedly illegally manufactured and sold.

As I have written many times, the biggest obstacle to reducing the number of these mass murders is the fact that it is nearly impossible to involuntarily institutionalize people with severe mental illnesses under state laws. (I’ll use the term “insane” to label those people because it is accurate regardless of whether or not it’s politically incorrect.)

Since the 1960s, state law has made it almost impossible to involuntarily commit an insane person to a mental institution. Any federal law attempting to preempt all of those state laws would probably be unconstitutional.

So it’s a state problem and the states have to choose to deal with it. Some are trying to substitute “red flag” laws — under which a gun owner’s firearms can be confiscated on the complaint of a family member or the police, because a person is considered likely to commit violence. Those laws are of dubious constitutionality because the Fifth Amendment requires due process before the government can impose such a remedy. (There are exceptions under case law, and the courts will have to decide whether “red flag” laws will be another.)

Because the principal common element in these mass murders is that the perpetrators are insane, there is a better but more difficult solution. First, the psychiatric community could develop an accepted standard to judge whether a person is both insane and a danger to society. That standard could be adopted by the states in a uniform code of laws — like the Uniform Commercial Code that governs business transactions and is in almost every state — to give the insane due process and make it easier to involuntarily commit them before they can kill dozens of innocent people.

That, of course, would be anathema to liberals. The psychiatric community and the state legislatures don’t want to “stigmatize” insane people by labeling them correctly and providing consequences for their insanity. Heaven forbid that we would offend anyone in order to protect others from potential mass murders.

Medical experts at Yale University reportedly called for drastic measures to help Adam Lanza, but his overprotective mother ignored them. Those experts would have had an obligation to report him to the police if they had determined that he was intending to commit murder, but they apparently didn’t.

If those medical experts were able to decide, under established standards, that Lanza was in fact dangerous and report the facts to police, and the police were empowered to go to court to involuntarily commit him, 26 people — including his mother — would still be alive today.

When the Newtown murders occurred, I turned to one of my best friends, Dale McClellan, to see what could be done to protect children at schools. Dale is a former Navy SEAL and scout-sniper instructor, who has school-age kids. His company, Special Tactical Services, has a range of businesses including firearms training for governmental and non-governmental personnel.

As I wrote then, Dale had a bunch of good ideas. First, limiting access to schools — which most schools now do — isn’t enough. Second, install ballistic-resistant windows on at least the first floor of every school building. Third, install ballistic-resistant doors and door locks to every school room so that a “lockdown” would actually have an effect. Fourth, because teachers aren’t trainable to go out into the hallways and confront a shooter, provide them — at least elementary school teachers —with ballistic-resistant blankets under which they can hide kids during the lockdown until the cavalry arrives.

My article appeared about two days after the Newtown shooting in 2012. To my knowledge, no school district in the nation has done any of the things Dale recommended to protect the kids.

Many schools have a police presence, but they are “school resource officers” whose duties are to talk to kids about things such as jaywalking. Instead of “resource officers,” schools should have real guards, well-armed and armored, whose only duty is to patrol the halls and to confront and defeat an armed intruder.

But these things too are anathema to state and local school boards because most of them are comprised of people who have the same mindset as Liz Warren and Bernie Sanders. They insist that schools, entertainment arenas, and too many other places be “gun-free zones.” Protecting children and adults is, in their minds, better accomplished by limiting your Second Amendment rights.

Another push for gun control legislation will begin this week. The rumor mill says that President Trump may go along with some proposals on background checks and possibly more.

We know to a metaphysical certainty that background checks, assault weapons bans, gun-free zones, and the rest of the policy nonsense liberals insist on won’t reduce in number, far less end, the mass murders with firearms.

As the 2020 campaign rolls on, we’ll hear a lot of Democratic candidates pleading, with tearful eyes, for more gun control laws. Trump should oppose their ideas — because they won’t work — and propose ideas of his own that will actually help deal with the problem. He could start with those presented here.