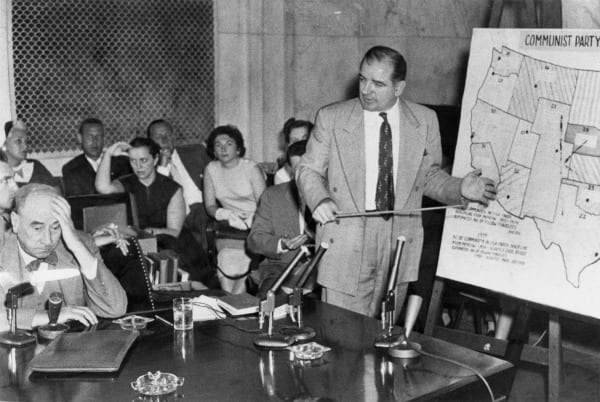 Today’s young people might have heard the phrase “McCarthyism,” and if they have, it’s as some horrible miasma of Nazism and the “killing fields” and other hovering terror of fear. But I was there, and I lived through it, and it was real. And I even managed to weave some good out of those strands of evil.

Since this horror show of McCarthyism played some considerable role in the working out of my childhood, I would like to say a little about the distinguished senator from Wisconsin.

No sooner had the hot war against fascism ended in Europe, Africa, Asia, and the Atlantic that the cold war against communist expansion began in deadly earnest in Europe, Asia, and Africa. The communists began playing with fire in divided Germany with small-stakes poker in 1946. The stakes rose from Stettin in the Baltic to Trieste in the Adriatic (to paraphrase Churchill) to the horrible miserably bitter killing zones in Korea in June 1950.

The U.S. government and mainstream media were mostly on the side of the communists wherever this cold war was waged. The Russian Bolsheviks, who had been our “gallant allies” in radio and print news especially, had aimed their super powers at our allies in Europe and China. Then we saw that there had been high treason in the highest of all possible treasonous hotspots, the atom bomb (and soon to be hydrogen bomb) projects. We as citizens became apoplectic with rage against what were believed to be our life-or-death enemies in the Kremlin and Beijing.

Defenders of the flag and the flag’s values under the Constitution ran for office and often won in the period from 1946 to 1950. It was not uncommon for voters of 1946 and 1948 and 1950 to agree with voters of 1922, who believed that the allies had suckered the U.S. into war. These allies had meanwhile kept their immense empires and armies and navies while “the little brown fellows” suffered continuous oppression.

And the Russians had retraced the path of Stalin by grabbing immense swaths of eastern Europe and keeping their pals in power there by the time-honored means of secret police, mass murder, and enforced mass starvation.

The names of McCarthy, Jenner, and Knight come to mind immediately as politicians who rode the rails of anti-communism to political power. It took only a modicum of suspicion from the media powers who were not on the Red side to get the nation “het up” by the slightest allegation that a Jewish dentist and his pals working in or near a government laboratory were only a short subway stop from nuclear bombs pointed at the United States.

I was a child in the public schools of Montgomery County, Maryland, when the Cold War was at its peak. We children of people who worked for the government had to be super-extra careful not to say or do anything that could get us into trouble.

The example that comes to mind like a roaring mushroom cloud boiling up over Nagasaki hit me when I was in third or fourth grade. We were to fill out forms that said what our parents’ work was. For example, one kid’s father might be a tobacco farmer (still lots of farming in Maryland those days). A girl’s mother might be a school nurse.

I had always known that my father was an economist. I had always known it had something to do with the revenues and spending of the federal government. The night before we were to turn in our papers my mother took me aside and told me that I was to enter the word “statistician” instead of “economist.”

When I asked my mother why we were making that change, she coolly said that in my little child’s mouth, the word “economist” might sound too much like “communist.” Frankly, even at the time, the explanation seemed bogus. It just did not make sense.

Time passed. The Civil Rights movement was hot. The cold war faded as a motivation for anything serious, especially something that reached as far back as to fears from 1950 or 1951.

In 1960, in AP English, I was a tenth grader at Montgomery Blair High School. Our teacher, a complete witch, assigned us as a project to put up a bulletin board with headlines from our local papers describing the latest Civil Rights battles. The idea was to compare the mean-spiritedness of these struggles with the generosity and loveableness of the Founders.

One of us put up a few headlines about black people being turned away from buying seats at a movie theater just a few miles from the White House.

Our teacher brightly asked us students what we thought that a Madison or a Lincoln would think about this situation. Did “all men are created equal” even mean anything in such an America?

I raised my hand and said, “Mrs. Feldesman, that’s the kind of question a communist would ask.”

Mrs. Feldesman hit the roof. She immediately grew flushed and sent me to the vice principal’s office while she went there ahead of me.

It turned out that, in fact, Mrs. Feldesman either was or had been a card-carrying communist and had lost her last job because of it. I had absolutely no idea of that — none — and had asked my question as a sort of parody of a comment that a segregationist might make about integration. But Mrs. Feldesman did not know any of that and in fact probably would not have cared if she did know it.

I had to be punished for my transgression of unintentional excess anti-communism. The punishment was that I was blackballed from being a member of the Junior Honor Society. This was a group of high-achieving juniors marked for great future success. I was sent home with a note to this effect addressed to my parents. “Your son is mocking people for being sympathetic to school integration,” said the note, or something to that effect.

Boy, did she have the wrong cowboys. My parents were by no means segregationists except maybe in some secret part of their hearts. But they were extreme anti-communists, and they were not going to have any sympathy at all for a communist punishing their darling boy.

Now, you have to look back at that era and maybe even to have been a part of it to realize how incredibly brave it was of my parents to stand up to a communist. My neighbors were largely left-wingers who would just as soon have had Stalin as president as Ike.

Time passed, as it has a habit of doing. The next year I applied to college. My mother very much wanted to have me go to Harvard. I had visited many great colleges, and Harvard had scared me. (I do not like New England, by the way.)

By an amazing set of circumstances, I was accepted by every college I applied to except Harvard. My high school college guidance counselor told me I was not admitted because I had been blackballed by Mrs. Feldesman from the junior honor society. (I had been asked to be a member of the senior honor society and had turned it down because I was not going to beg for crumbs.)

My mother, God love her, was extremely sympathetic to my situation. She totally hated Mrs. Feldesman for the rest of her life.

The story gets better. I decided to go to Columbia instead of Yale or Williams or Brown or Oberlin because I thought that in New York City I would have access to beautiful show girls and starlets. (Always an obsession with me.)

At Columbia, however, I did not meet a single show girl. I did get to join a great fraternity, Alpha Delta Phi.