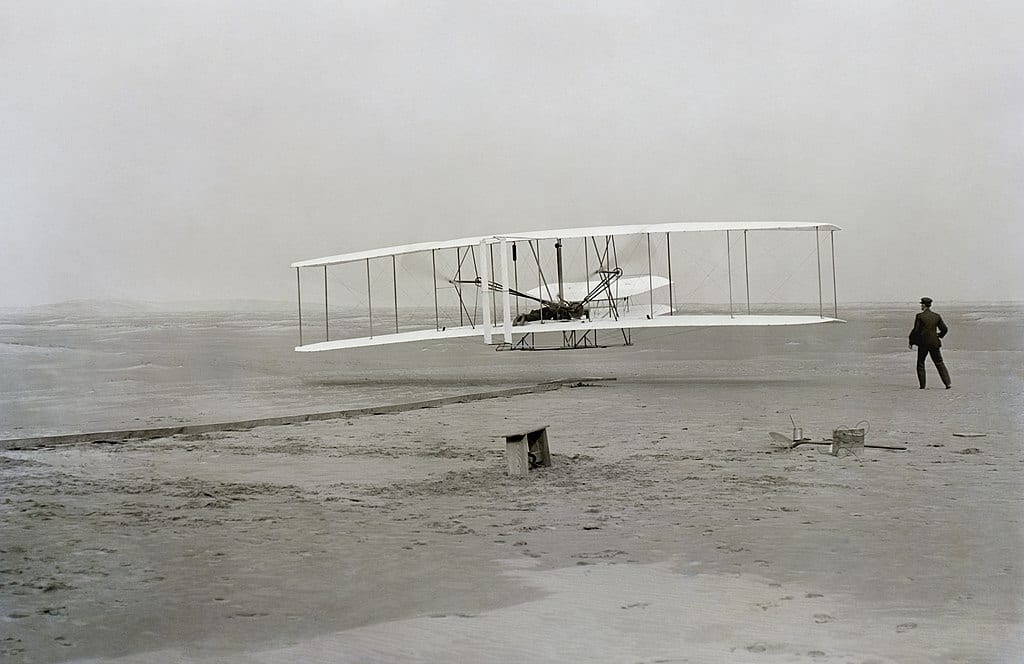 Kill Devil Hill. The name would be memorable even if you were to take away the epic event that occurred here. No one is quite sure how this formidable sand dune got that name. The Outer Banks of North Carolina was once pirate country — Blackbeard, himself, operated just south of here — and there is some legend involving a batch of rum, which is the pirates’ drink, being “strong enough to kill the devil.”

Maybe so. But real, magisterial history was made here and the anniversary of that event — December 17, 1903 — just recently passed. On that day, Wilber and Orville Wright achieved manned flight for the first time in history. Today, there is a monument on the site with a park built up around it and run by the U.S. Park Service. A few days ago, when I drove by on Highway 158, there were several vehicles parked at the gates which were closed, chained, and padlocked. There was a printed notice of some sort posted on the gate. A couple of people were studying it. 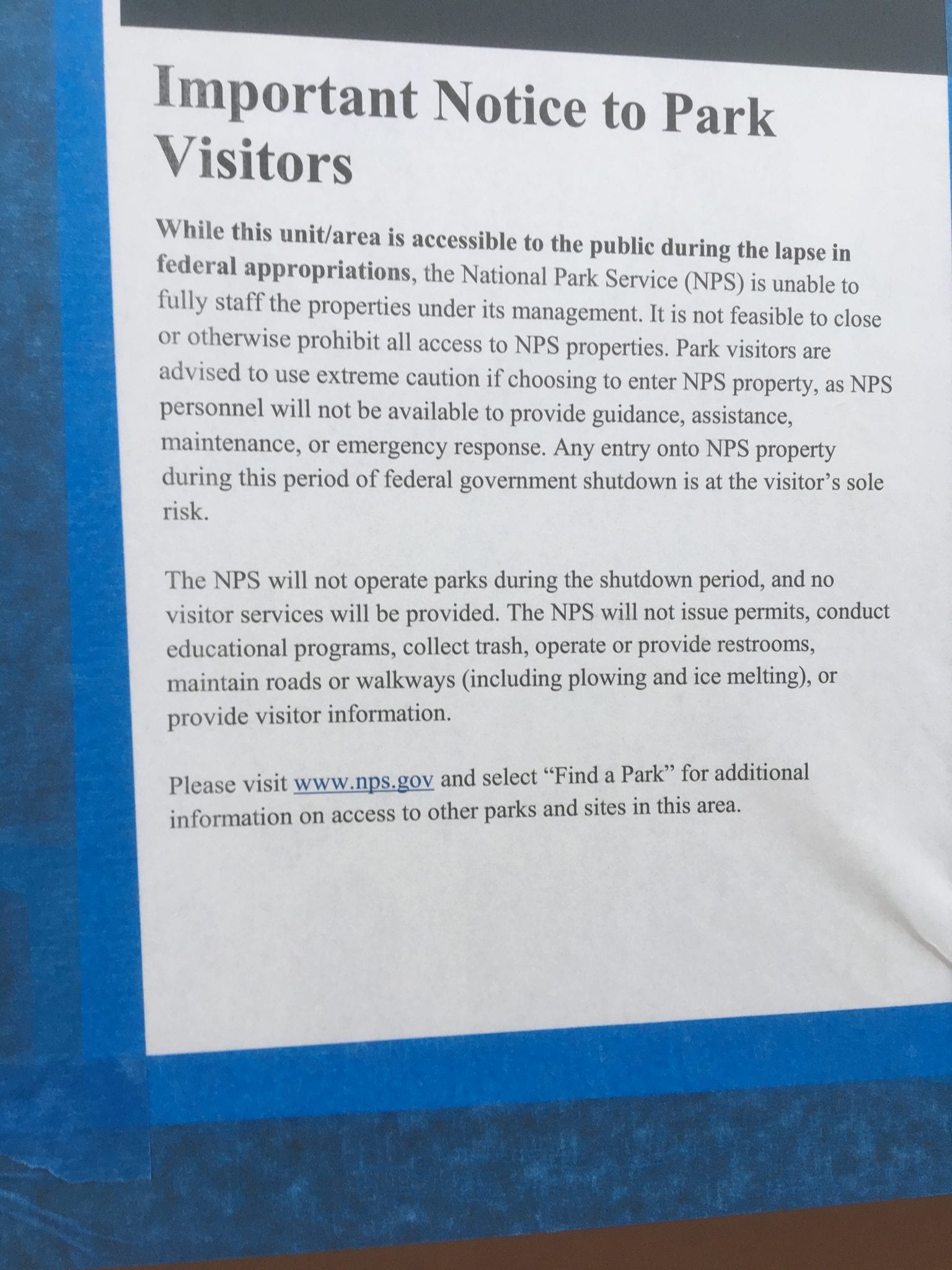 The notice was to inform that this entrance to the park was closed due to what was being called a “government shutdown.”

There was, I thought, something awfully dispiriting about this scene. For one thing, people’s taxes had paid for the establishment and maintenance of this park. It belonged to them, not the government. Still, some bureaucratic flunky had padlocked the gate and posted that sign. Sort of a notice to the people, informing them that this is what they could expect if they misbehaved.

So I drove around to the back way and parked in a lot adjacent to an airstrip which is the Kitty Hawk airport. There were no planes in sight and a gate across a walkway leading to the airstrip was also padlocked. I suppose this meant the airstrip was also closed until the budgeting crisis in Washington was resolved. I’m not sure who was inconvenienced by this lockout but surely somebody was.

But if you wanted to get close to the majestic memorial at the top of Kill Devil Hill… no problem. You could take the path and walk right up to it. 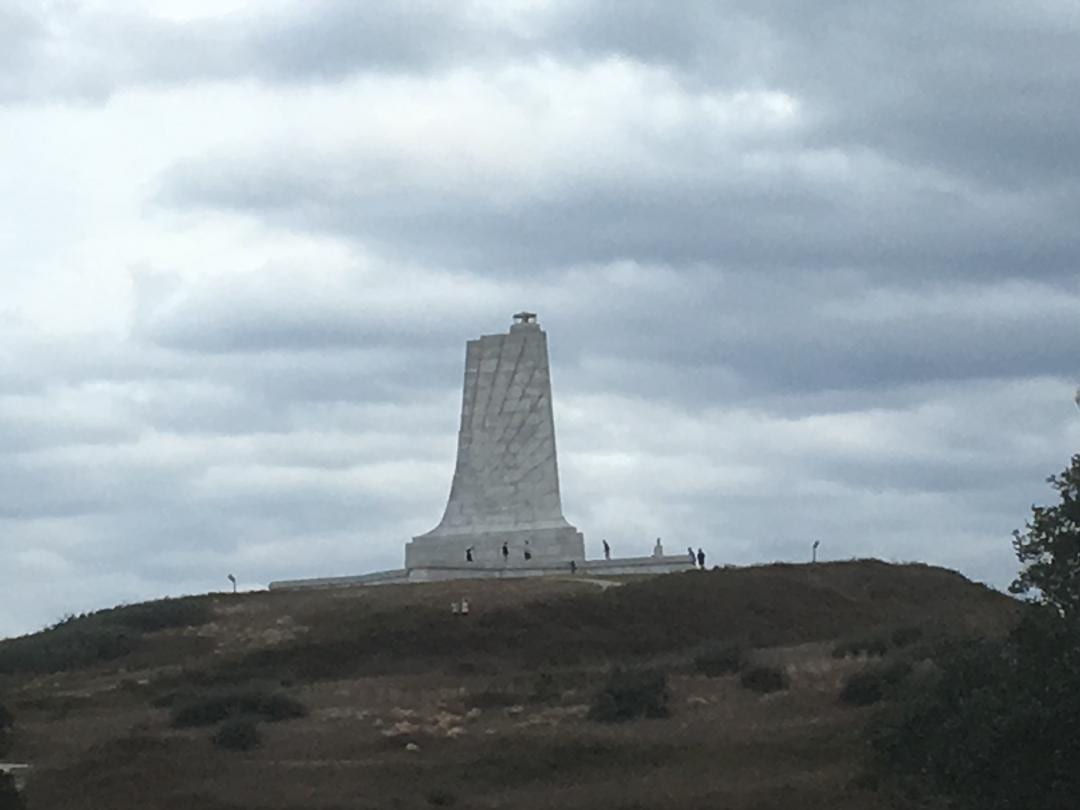 There was something oddly fitting — and correspondingly distressing — about the government’s closing of this park. In the first place, it was ineffectual. The shutdown amounted to padlocking some gates but not in denying entrance to the park. The closing of the park was as symbolic (if, indeed, that is the right word) as the closing of the government itself. Nobody from the IRS has been sent home.

Wilber and Orville Wright picked this place to test their designs and theories because the winds were good. Otherwise, it was a forlorn, nearly inaccessible, mosquito-infested backwater. But it had good, reliable wind. So the brothers spent their own money to get here and to build the facilities they needed to get on with their work. They had an insight — a breakthrough idea — about how control of an aircraft in the air was the critical piece that would make manned flight possible. Power was important but without the control element the machines would crash. Back in Daytona, home to their bicycle business, they had tested their theories in a wind tunnel of their own design. The results made them confident they would achieve manned flight down on the Carolina coast.

Meanwhile, they had competition to include one Samuel Langley who had all the right connections and was able to engineer a $50k grant from what was then called the “War Department.” He had the press and Washington and the Smithsonian. The Wright Brothers had their little operation down in North Carolina and their ideas about control flight through “wing warping,” among other such concepts.

On October 7, 1903, Langley arranged a demonstration on the Potomac River. Reporters and crowds came to watch the first manned flight. The plane went into the river. Two months later, he tried again. And failed again. Nine days after that, the Wright Brothers made their first flight. It was witnessed by five people. Two locals, two from the lifeboat station, and a photographer.

The Smithsonian, among others, never quite forgave the Wright Brothers and later modified Langley’s plane (called the “Aerodrome”) enough that it became capable of manned flight. The Smithsonian then displayed the craft and described it as being the “first manned aircraft heavier than air and capable of flight.”

Which seems, through the prism of history, to be not just deceitful but spiteful. A way of saying that these bicycle makers from somewhere out in the sticks, using their own money and ingenuity would not be allowed to grab the prize from a Washington sanctioned and financed insider.

Orville Wright retaliated for the insult and the fraud. Rather than put the plane that had made that first flight on display in the Smithsonian, he had it sent to England where it stayed until after World War II when the Smithsonian acknowledged its deceit. But before he would allow the Smithsonian to display that original plane, Wright and his lawyers drew up the following conditions:

Neither the Smithsonian Institution or its successors, nor any museum or other agency, bureau or facilities administered for the United States of America by the Smithsonian Institution or its successors shall publish or permit to be displayed a statement or label in connection with or in respect of any aircraft model or design of earlier date than the 1903 Wright Aeroplane, claiming in effect that such aircraft was capable of carrying a man under its own power in controlled flight.

The Smithsonian agreed and in 1948, the plane that made the first manned flight went on display in Washington.

More than 70 years after that, the gate at the entrance to the park at Kill Devil Hill is chained and padlocked.