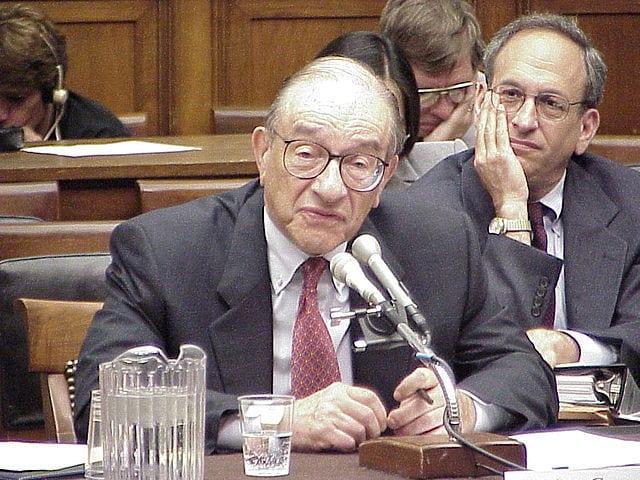 As indications arise that President Trump may be softening on his tariff stance with China, former Federal Reserve Chairman Alan Greenspan called his duty policies “insane.”

While at an event at New York University last Wednesday, Bloomberg reported, Greenspan fielded a question about the tariffs with China, saying no one really wins when there’s a battle over duties.

“There are victors and there are losers in a tariff fight,” he said. “But that doesn’t say that a more important issue is both are losing, it’s just the winner loses less.”

Greenspan said people should think of tariffs as an excise tax.

“It’s a tax, and everybody engaged in warfare of this type, it would mean that you’re withdrawing credit or purchasing power from a whole series of countries,” he continued.

The two nations have exchanged a series of tariffs over the past several months. In July, the Trump administration imposed 25 percent tariffs on $34 billion of Chinese imports, which were matched by China. Another round of $16 billion of duties on Chinese imports was also matched. Trump added $200 billion more to the tally at a rate of 10 percent in August, with China responding with $60 billion in tariffs on American imports. The last round of tariffs is set to rise to 25 percent in January.

Trump has also engaged in tariff wars with Canada, Mexico, and the European Union. His administration recently negotiated a replacement for the North American Free Trade Agreement, called the U.S.-Canada-Mexico Agreement.

Trump has threatened to tack on duties to the remaining $267 billion in imports from China. Since the U.S. imports much more Chinese goods than vice versa, China can’t match the tariffs tit-for-tat going forward, although experts warn that the country could strike back with sales restrictions of rare materials.

But talks have reopened between the two nations in advance of a meeting between Trump and Chinese President Xi Jinping at the G20 summit in Argentina at the end of this month. Trump and Xi had a phone conversation on Nov. 1. Bloomberg reported that Xi sent a letter to the Trump administration last Wednesday outlining some concessions that could jump start a trade deal. The sources told that outlet, however, that the concessions were limited and long negotiations still loom.

Xi’s primary economic emissary, Liu He, and Treasury Secretary Steven Mnuchin recently spoke for the first time in months, Bloomberg said, with National Economic Council chief Larry Kudlow saying that the U.S. and China are now in contact “at all levels.”

Removing one of the more pointed individuals from the equation will also help. Peter Navarro, author of Death by China and a trade adviser to Trump, has reportedly been asked not to participate in any discussions between the two nations after he made heated comments attacking the denizens of Wall Street for their stances on the talks.

“There are so many disputes between the two countries that it will take many months to iron out a final deal, but last night’s reports — and the apparent demotion of Navarro — are positive developments, in our opinion,” Greg Valliere, chief global strategist at Horizon Investment, told Business Insider.

That outlet speculated that Democrats talking over the U.S. House could be a reason for a possible softer stance, although the Wall Street Journal noted that the tariffs didn’t seem to hurt Republicans in competitive House races. The GOP won 10 of 19 seats in districts with high soybean production, one of the crops hit hardest by the tariff wars between the U.S. and China.

Although the economy remains strong, Business Insider said the tariffs are beginning to have an impact, including a slowing of business investment due to uncertainty over trade policies.

Michael Zezas, head of U.S. public policy research at Morgan Stanley, said that he still leans toward trade spats being an issue after G20 is said and done.

“The increasingly constructive tone is likely masking ongoing, fundamental disagreements beneath the surface,” Zezas wrote. “Hence, our base case remains that escalation of trade tensions will continue.”