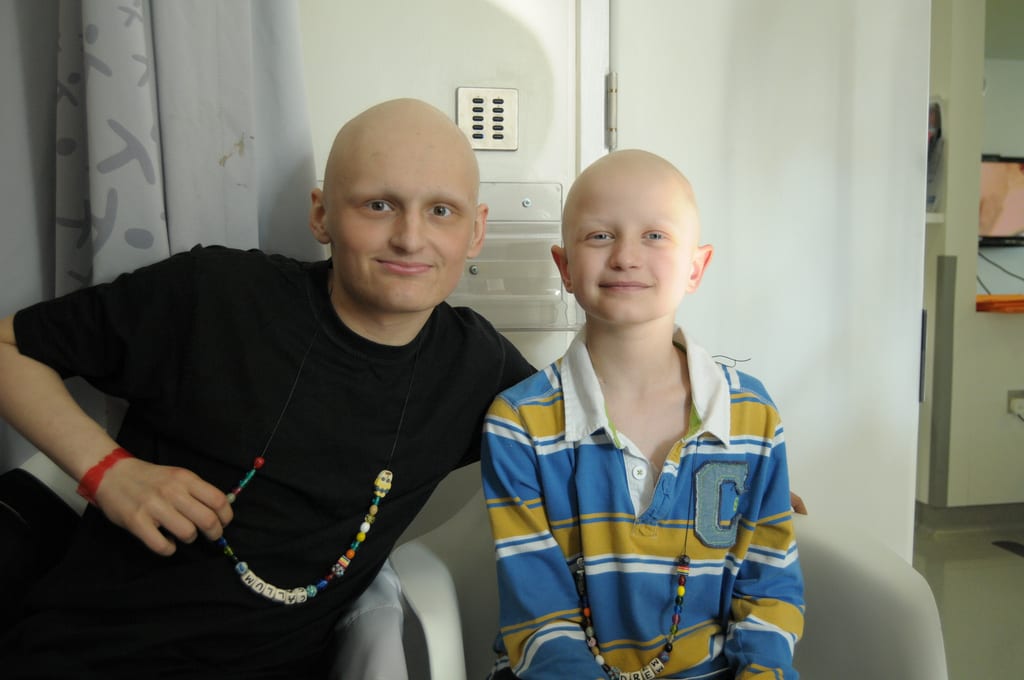 A year ago yesterday, my youngest son lay on a bed in the emergency department of Texas Children’s Hospital. He suffered with an unexplained high fever and a wave of hives. The staff was anxious. There were no beds in the Bone Marrow Transplant department. A bed was coming open in the cancer ward. Here this bald boy was, severely immune compromised and surrounded by kids coming to the hospital with the flu. This was not good.

Spencer had been home a month. His bone marrow transplant occurred in September.  In late October, they let him go home, but it was precarious. In the middle of flu season, with a nascent immune system, bags of germs, aka humans, were threats. Though home, he would have to be quarantined with no visitors, no school, no social life, but at least it was home. The upsides were many: No IV’s. No pestering four times a night for vitals and meds. Sleep and peace.

We were warned that children often end up back in the hospital. We knew it was possible, but the reality of it was something altogether. Back goes in the IV. Back to being the patient.

Finally, a bed opened up. After a sleepless night (for us parents), he was transferred to the Cancer Ward — a surprisingly rambunctious and lively place with bright colors and because it was Thanksgiving, lots of visitors and even more activity. One young child impishly poked his head into Spencer’s room to inspect the new kid and ran off.

A floor above, things are not so exciting. The Bone Marrow Transplant Center, or as Spencer liked to call it, The Morgue, was still. There were fifteen beds and because the children are so sick, it’s kept dark. There’s no need to tell anyone to be quiet… it just is. The main goal on this floor is to not die.

Because each patient is so isolated in his own room, however, it becomes his own little world. The patient decorates his space the way he wants. He can be there at minimum a month, but in some cases years. It is, for all practical purposes, a hermetically sealed, forced air containing home. A very tiny home. A world in isolation.

Going to the cancer ward was a shock. Spencer had been diagnosed with Aplastic Anemia. It is like Leukemia, but in some ways worse. It’s worse because no one knows what it is, so the social support is nil. It’s worse because it’s so rare that those who get it feel cursed. It’s worse because the only known “cure” is a bone marrow transplant. The best chance for surviving Aplastic Anemia is a full sibling match. Only 23% of people have a match. Spencer, thankfully, had his sister. So he endured chemotherapy to wipe out what was left of his immune system (euphemistically called “conditioning”) and got the transplant. For all this and the hospital time, though, because Spencer was in isolation, and because we forced as much normalcy into the hospital room as possible, there was little self-awareness. Because he didn’t see others, he didn’t see himself for how sick he was.

At the cancer ward, though, there was no escaping the sick children. Bald babies and kids and teenagers were everywhere. They dragged their IV poles. They grinned and goofed, but they were sick. Their faces swollen from medication. Their bodies slumped and tired. Their eyes war weary and bleak. Spencer was shocked.  Horrified. For the first time, he saw that he was gravely ill. It became real.

“I want to go home. I’d rather die than be here,” he said, which scared me. There was no consoling him. He was like Adam and Eve in the garden, he saw and knew, and he couldn’t un-know.

In the common room, I met a Hispanic man, a pastor with six children. His eldest daughter, aged 17, was dying. There were no more treatments for her. As her last act of selflessness, she’d signed the papers that day, her dad told me, to try an experimental treatment. That way, he said, she felt like her life meant something. She would die helping other people with this disease. He told me this as we waited in line for turkey and stuffing that some generous soul had donated for Thanksgiving. My eyes welled up at the grief of it all. I was in awe of his stoicism and grace. When I got safely back in the hallway, I cried, then pulled myself together to be brave for my son who was being brave for me.

Spencer’s multiple tests came back. He was infected with C. Difficile and E. Coli. If you’re at all knowledgable of things medical, you know this is not good. More antibiotics. The fever broke. The hives abated. Two days later, he was allowed to go home.

But we missed Thanksgiving. We were at the hospital with the doctors, nurses, parents, children, and extended families struggling to live and give that life some normalcy.

Right this minute, one of my dearest childhood friends is dying. She has cancer and it’s near the end. Hospice is there. Her family is visiting and saying their goodbyes over Thanksgiving.

Guess what her family is not caring about? Guess what I’m not caring about? A relative tried to bait me last week by telling me she went to see Oprah and Michelle Obama in Chicago for Michelle’s book release party. I didn’t bite. Like Mr. Incredible said to his wife, “You keep trying to pick a fight, but I’m still just happy you’re alive.”

Some people have asked me how I can maintain equanimity in these politically turbulent times. Well, it has never been easier. It’s all a matter of perspective.

It’s not that politics doesn’t matter. It just matters less… way less. What matters are the simple pleasures of hearth and home: the comfort of faith, the joy of food, the fullness of love. Family and friends. They shouldn’t be taken for granted. Not everyone has them.

Sometimes, I find myself staring at my son and tearing up then turning away quickly so he doesn’t see, silently thanking God for my bounty. He’s alive! He’s healthy. He’s healthy enough to be back to his obnoxious teenage self. I’ve never, and this is not an exaggeration, been more grateful.

Wishing you and yours a blessed Thanksgiving filled with love and what matters most.