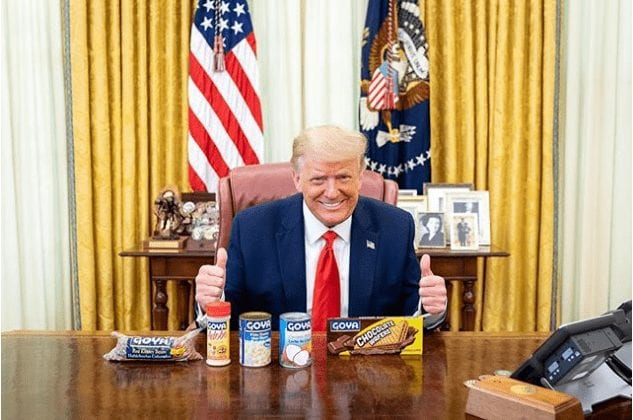 There must be no real outrages left in America if so-called progressives have nothing better to do than turn their collective rage on Goya, because the ubiquitous food company’s president went to the White House where he announced he was giving one million cans of chickpeas and another million pounds of food to American food banks.

The brute, Goya President Bob Unanue, had the cheek to praise America’s chief executive during a round-table with Hispanic leaders. Unanue said America was “blessed” to have a leader like President Trump who is “an incredible builder.” He added, “And we pray. We pray for our leadership, our president, and we pray for our country, that we will continue to prosper and grow.”

For the crime of having good manners and holding the White House in esteem, Democrats and activists started a Twitter campaign #Goyaaway to boycott Goya products.

“Oh look, it’s the sound of me Googling ‘how to make your own Adobo’,” responded Rep. Alexandria Ocasio-Cortez, D-N.Y., on Twitter.

Former San Antonio mayor and failed 2020 Democratic presidential hopeful Julian Castro tweeted, “Free speech works both ways. As long as he props up a man like Trump, many consumers will tell the company to #Goyaway.”

Former Rep. Luis Gutierrez, D-Ill., took a video of himself in his Goya-stocked pantry and railed, “I say to the owners of Goya, you came as conquistadores, you wiped out our indigenous population in Puerto Rico, you exploited the Puerto Ricans for centuries under your colonialism, and now you wish to bring about more of Donald Trump, who hates us, despises us.”

In this boycott, however, colonialism isn’t the target — civility is. Absent an election, the Left can’t remove Trump from the Oval Office, so the goal is to isolate him by flogging potential friendlies into submission.

To his credit, Unanue is the rare American CEO who did not cave to the social-media mob.

During the McCarthy era, Washington blacklisted screenwriters and actors who had been associated with the communist party, making it impossible for them to get work in Hollywood.

Is it progress then when the Left threatens the livelihood of 4,000 employees because their president showed up at a Republican White House?

The theme here is guilt by association.

Some Twitter users accused Unanue of promoting “hate,” while others accused him of supporting “children in cages” with photos of children apprehended crossing the border seen behind a chain-link fence.

It’s ironic because the Left used Associated Press photos of children behind metal fences to excoriate Trump’s family separation policy — unaware that these children were incarcerated in 2014 when President Barack Obama was in the Oval Office. Because he was enforcing federal immigration law.

Be it noted that the Left did not attack Unanue for visiting the Obama White House for supporting “hate” and caging children.

As for Trump, he keeps kicking the hornets’ nest because he believes the Left’s constant intolerance will keep his base ginned up and give them something to do — buy beans.

Wednesday, as the food frenzy was abating, Trump tweeted, “@GoyaFoods is doing GREAT. The Radical Left smear machine backfired, people are buying like crazy!” Staff posted a photo of Trump smiling and giving a thumbs up with Goya products strategically placed before him on the Resolute Desk.

On Tuesday, daughter and adviser Ivanka Trump tweeted a photo of herself showing off a can of Goya black beans. Ethicists charged that Trump’s elder daughter had violated federal ethics rules. But to this White House, the flap meant one thing — free publicity.

Everything is turning into a referendum on Trump: hydroxychloroquine, masks, opening schools, Dr. Anthony Fauci, the police, you name it.

In the age of social media, the zealots on both sides effectively have drawn a line through every public square and told people they have to choose a side. The more inconsequential the issue, the more rabid their rhetoric.

And the younger they are, they happier they are to try to destroy a philanthropist, a family business and its workers simply because the guy in charge may not agree with them. Sure they have a right to boycott, but that doesn’t mean they should try to marginalize everyone who doesn’t hate with their intensity.

They have no concept of what it takes to maintain a civil society.