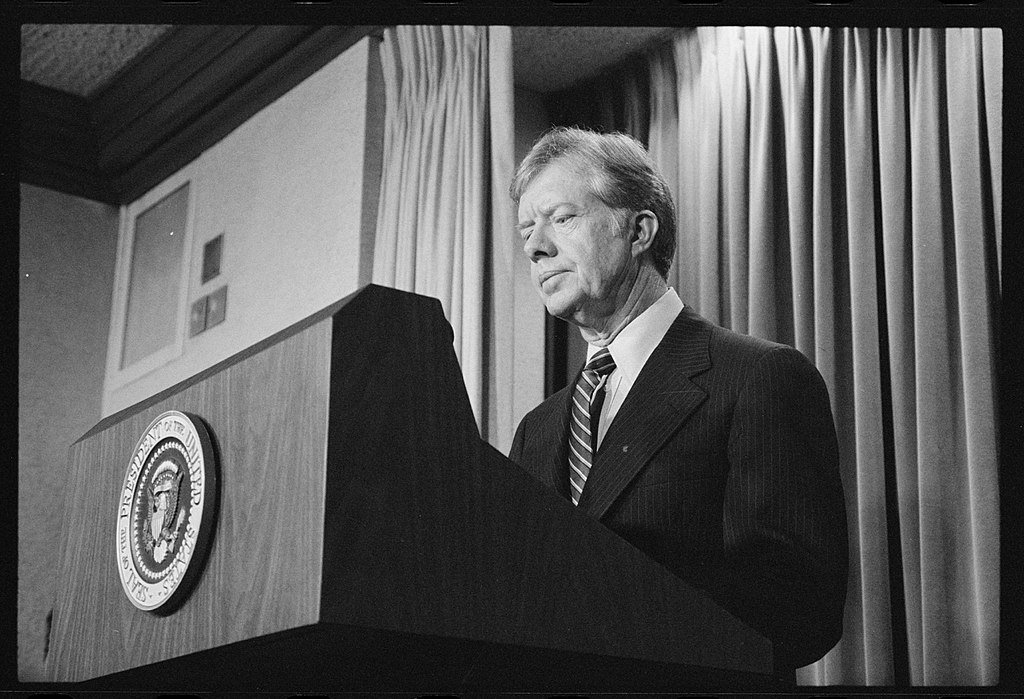 I can remember the exact moment I became politically aware. It was on November 4, 1979, when a group of radical Islamic Iranians smashed into the United States Embassy and took 66 Americans hostage. Up to that time, as a University of Maryland English major, I cared only about film, literature, and girls —not necessarily in that order — with zero interest in the nuances of international diplomacy. But this national insult enraged me. So, every day I’d rush home to my off-campus apartment and devour the TV news, expecting an imminent military response from our president. In my head I replayed the exuberant scene from John Milius’s classic The Wind and the Lion (1975), where a platoon of U.S. Marines march into Tangier on a similar hostage rescue mission. Instead, night after night, all I kept seeing were Nightline’s subtitle, “America Held Hostage — Day ___,” Jimmy Carter’s befuddled face, and the Iranians shouting, “Death to America!”

When the wife of State Department hostage Bruce Laingen, Penelope Laingen, recommended we “tie a yellow ribbon round the old oak tree” — the refrain of a 1973 Tony Orlando hit — and people actually started complying, I became angrier. I knew something had gone wrong with the country — an impotence embodied by the man in charge of it, President Carter. And I determined to do my small part to right the ship.

Upon graduating from college, I applied for, and got, a newswriting internship at influential Washington, D.C. station WTTG’s The 10 O’Clock News. There, even as a young punk, I could recognize the historic importance of the 1980 presidential campaign, although not yet the magnificence of the Republican candidate, Ronald Reagan. My focus was on Jimmy Carter, and how two occurrences — one tragic and one comic — seemed to highlight his incompetence.

The worst of these was indirectly caused by Reagan, specifically his incomprehensible — to the Democrats — competitiveness in the race. The Carter team had wanted to run against the unacceptably right-wing — so they thought — Reagan as opposed to the formidably respectable steady hand, George H. Bush. But Reagan consistently hitting Carter for the Iran hostage fiasco resonated with the American people, and certainly me. A July 1980 Harris poll showed Carter losing to Reagan 53 to 26 percent (independent John Anderson had 18 percent). The desperate Carter went against his nature and authorized a military rescue of the hostages. This resulted in eight soldiers dead and a helicopter burning in the desert without combat.

The lesser incident, which took place two months prior, became humorously known as the Attack of the Killer Rabbit. President Carter was alone in a small fishing boat on a Georgia lake when a small white rabbit swam right toward him. Carter tried to repel the beast with a paddle and the rabbit swam away. Pictures of Carter wielding his oar against the non-monster took on ridiculous proportion and made him a mockery at the worst time, even in the then still valid Washington Post.

On November 4, 1980, I was at the Republican National Headquarters helping the WTTG reporter cover election night. It was the most electrifying night of my life. I watched a giant electronic map of the United States go red in 44 states in what seemed like half an hour. Saw the faces in the crowd change from shock to elation amid screams of joy. Looking back, I view the two Carter incidents as omens of the seismic shift in American politics and culture that took place that night. Eight years of a strong, patriotic American comeback followed — accompanied by some of the best films and music ever produced — leading to the collapse of the Soviet Union. Then George Bush came in and mucked it with his “kinder, gentler nation” idiocy. Nonetheless, I see similar signs of change now, and foresee a sharp turn for the better this November 8.

As awful a president as he was, Jimmy Carter was Ronald Reagan compared to Joe Biden. And I’m glad he lived long enough to relinquish the Worst President of All Time title. However, Biden is only a mindless shell — the conductor of an ugly, evil, anti-human philosophy that has burrowed deep into the United States, driven by the dark forces of academia, media — mainstream and social — and the entertainment industry. Its disciples could have won a permanent victory and made America another permanent failed state like Cuba and Venezuela if they had simply bided their time. But Donald Trump’s 2016 defeat of their unctuous presidential standard bearer, and his laughing at them for all to witness, wrecked their schedule and drove them mad.

They could no longer settle for rocketing inflation, exploding crime, homeless-ridden streets, open borders, a fentanyl death epidemic, and fabricated racial division. They had to go a rainbow bridge too far — pushing transgenderism as normal. Consequently, they lost formerly blue Virginia, and are about to lose several more states.

And even people once on their side said “No!” — most notably J.K. Rowling. She blasted transgender lunacy as an attack on women and was attacked in turn. Being the most successful writer in history, Rowling amusedly struck back. She responded to a recent tweet, “How do you sleep at night knowing you’ve lost a whole audience from buying your books?”, with, “I read my most recent royalty cheques and find the pain goes away pretty quickly.”

The Daily Wire’s anti-trans star, Matt Walsh, was even more defiant. Walsh is currently filling university auditoriums to capacity crowds on his What Is a Woman? college tour, another sign that more young people are rejecting leftist indoctrination and enabling Republican victories. “This is something I want the protesters at this and any other forthcoming events to understand,” Walsh said in his latest podcast. “That I will do precisely what you don’t want me to do and say what you don’t want me to say. And there’s nothing you can do to stop it. You are powerless, and that’s something you’re just going to have to deal with. I know you’re accustomed to making demands and having your demands met. But that’s not the way it’s going to work this time. Okay, I want you to know how little your feelings mean to me. I want you to know literally nothing you say has any effect or makes any impact.”

On November 8, the tide will turn further right.