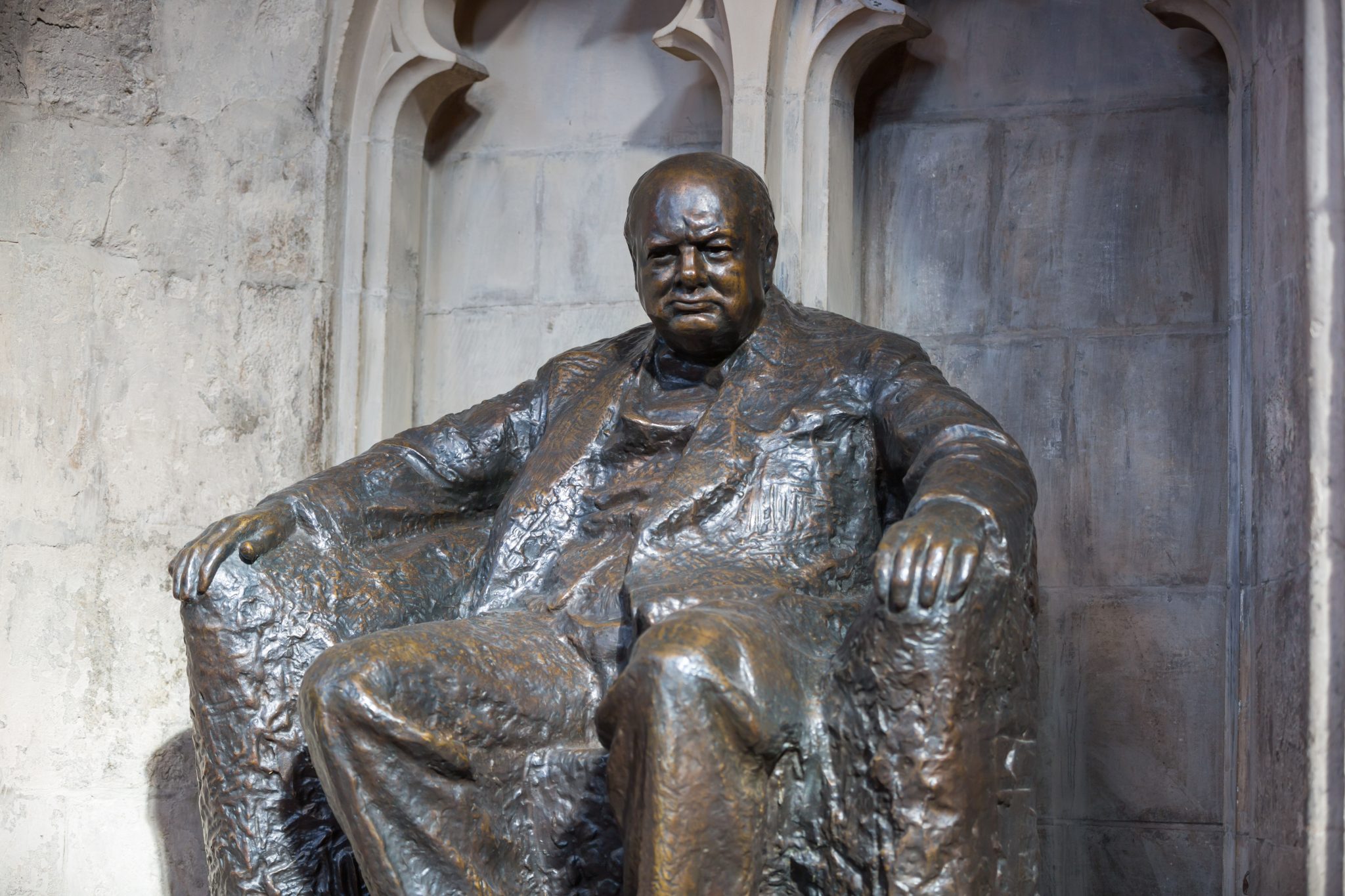 Amid the national conversation — a silly, fashionable term except it sounds like the yak-yaks it mostly is — I am reminded of how national leaders used to speak in times of stress. War and total economic ruin, mind, not the comparatively mild problem of a health emergency.

We have nothing to fear, one such great stated, but fear itself. And another, who would become his soul mate and ally in the world crisis, We shall fight them on the beaches … we shall defend our island… we will never surrender.

They addressed their countrymen at moments when it seemed to many of them that all, everything, was lost; but Roosevelt and Churchill did not believe this, and they meant to instill in others their faith in their nations’ and societies’ capacity to recover and win the last rounds, however distant these might be. Their words rang like trumpets, but they were spoken calmly, reassuringly, with just a slight, if firm, edge to allow those who heard them to know that, yes, anger as well as cheer, steel as well as light was in the air and should be seized. It was time to fight and surely suffer; it was a time as well to stand up and grin.

The American and the Englishman addressed different crises. The stock crash and the economic meltdown that settled in for three years before Franklin Roosevelt was elected president was a psychological shock that subverted initiative and thus left the economy in self-depleting stasis, misery, and impoverishment feeding on themselves. The mental led to the material.

By contrast, Churchill, chosen to head his country’s government as its armies and those of its ally were reeling and retreating across northern France, confronted a direct physical threat. Several hundred thousand Allied soldiers were killed or taken prisoner in scarcely four weeks in May and June of 1940. An invasion of the island was imminent. The material was leading to the mental, as appeasers amongst Churchill’s own Conservative party muttered about cutting a deal with the Nazi beast.

There was no comparison — and yet, in both cases, as there would be a year and a half later in America, and again in 2001, there was a need for clarity and faith.

The underlying faith might be based on religious beliefs, and for many Americans and Englishmen of that time it was. Or it might not; good and decent men might honorably think a greater power, if it existed, was indifferent to human foibles and sins or at least unwilling to intervene, for mysterious reasons of its own. The key faith, however, common to free societies whether monarchial or republican, consisted in the belief that free men could get their acts together — and act to save their freedoms, their families, their countries’ futures.

This faith was there, in the England of June 1940 and the America of December 1941. But like many human qualities, it required stirring. Call it a pep talk — Patton in the Ardennes, Henry at Agincourt, Chamberlain at the Little Round Top; why, your ordinary high school basketball coach at a timeout in the last minute of the last quarter. The comparisons are not facetious: we are what our societies make us. American boys, and girls, are instilled from the beginning, in every small and large moment of their lives, with the sense that in any moment, however desperate, if somebody says we can do it, then we can do it, and … go!

Now, let me be clear. Comparisons are almost always disproportionate and logically absurd. It is nowise callous to say that a dreadful, ravaging viral epidemic is not the same as a world war. Get over it, one is tempted to say, with a certain contempt for Chicken Littles without perspective.

Yes, on the basis of a few fatalities, we may be overreacting, crashing the stock market, stunting productivity, damaging capital and job formation, and in sum causing more damage — with, in consequence, more sick and impoverished people who cannot pay for medical care — than seems warranted by the dimension of the health emergency.

But that is just the thing: what seems warranted. The thing is this: we do not know. We do not know how vulnerable we are, and in particular the most vulnerable among us, and we must be clear that we will not abandon them, write them off as statistics, acceptable losses.

The anti-panic critics, like the thoughtful Heather Mac Donald of the Manhattan Institute, whose clear-eyed article of a few days ago in the New Criterion should be on every American’s read-now pile, make the case that we must stay rational, cost-efficient. It is an important case; it may be wrongheaded on crucial points, but that does not diminish its usefulness.

We do not know everything about this virus, these critics say, but we have strong grounds, based on what we do know, that it will be contained like others before it and that it does not necessitate wrecking our economy (and mental health, and civic institutions, and liberties).

But the pro-panic critics, like the Wall Street Journal’s eloquent Peggy Noonan, writing about the same time as Ms. Mac Donald, also base their case on the basis of the crisis’ uncertainty. Precisely because we do not know what’s in store, we must prepare for the worst; if it is overreaction, well, we will lose a few months of economic boom times, but boom times always return in America. This is not a matter of reacting to false science: we know this virus is pretty bad indeed, even if we do not know enough yet to master it.

There is, you might say, good panic and bad panic. Bad panic is the kind of thing Ms. Mac Donald, and several fine writers in our pages, are warning against; and notwithstanding the amoralism of arguments from cost-efficiency, “social isolation” frays us and enervates our moral outlook, since life is with people.

Good panic, Ms. Noonan counters, is a necessary correction to the failure of imagination that, to some degree, must be the reason for our setback. Of course you never know what’s coming until it hits you, which is why she is a bit disingenuous in making comparisons with wartime. Yes, Pearl Harbor was to some degree a failure of imagination, since we had reasons to believe the Japanese would attack us. Why mass the fleet in one place? Strategic thinking can be lazy.

By contrast, we prepared for the worst during the long standoff with the Soviets, and with all due caveats, it worked, at least to the degree there was no direct exchange between us and them, thanks to the imagination of people like the great late Herman Kahn. Surely there was a lot of wasted effort and expenditure, but who is to say it was not worth it?

Both the strategic view of Cold War times and the “proper perspective” view urged upon us by noting our attitude toward traffic fatalities or “ordinary” flu seasons surely should help us think this crisis through.

But keep in mind, with war in 1941 and last year’s flu or this year’s road deaths, we know, or should know, what we are up against, and can adjust our thinking to it. So even though it is distressing, it is within the imaginable, and we steel ourselves to its consequences.

Here we can to some degree do the same, and should, but there is still the unknown: we do not know how contagious is this strain, nor its lethality, nor its durability. We will soon know, in all likelihood, but in the meantime it is normal to be worried, it is moral to try to defend ourselves, which means everyone. This is good-panic thinking: our preparedness fell short, but we will not leave you behind.

Good panic requires that while we reject alarmist, contagion-and-death doomsday projections, we should welcome the sober and sensible science of Dr. Anthony Fauci, who emerges as one of the heroes of this crisis, along with a lot of ordinary Americans from airline pilots to nurses. Fauci notes that if we don’t do X, Y might happen. This is Ms. Noonan’s good panic as opposed to toilet-paper hoarding bad panic. It reminds us that we are already on the way to recovery if we take the precautions recommended in these pages by Melissa Mackenzie.

This is not different than a public safety director saying that if we do not obey any red lights, well yes, we can project traffic deaths will spike. He does not mean they will, as certain politically motivated officials are hysterically claiming.

If we do nothing, Churchill noted in one of those famous radio communications in May 1940, we will end up in the Dark Ages again. We are not in a shooting war, and evocations of Churchill are overwrought. But his thinking remains a model of clarity and good sense, in peace as well as war. He did not say we were heading for the Dark Ages; he said we will meet the danger when it comes and we will reverse it, and we will win.