One of the more noxious parts of higher education policy is the almost moralistic way in which people tell stories about the people who do go to college versus those who do not. Catherine Rampbell stumbles into this line of thinking by noting the higher earnings by those who went to college over those who did not.

Things only get worse for high school dropouts. A high school dropout in the 75th percentile – that is, a worker who earns more than do three-quarters of all equally educated workers – makes less than a college graduate in the bottom quartile of his or her educational class.

We’ll address the fact that nowhere does she mention how student finance is nearing crisis levels.

There are other more sociological explanations at work here, one being that those who are more inclined toward success see that society has deemed the four-year sleepover of the college experience crucial to working success. And where do they get such an idea? Why, charts (like the one below) that show that those who see the writing on the wall will get paid more. These studies are difficult to parse because they don’t really get at the chicken-or-egg question, which is:

Does college make one smarter and thus a better employee, or does college simply pool smart people into a more easily tracked group, with a few oddball dummies tossed in, which totally beats out all the dummies who dropped out of high school with the few oddball smartypants tossed in? Forgive the run-on sentence (and the dummies and smarties cracks), but I’m willing to bet my nickel that it’s the latter example, because various academic groups are always lording over us just how much better off the college set is in the end.

So here’s the chilling item for me in this chart: 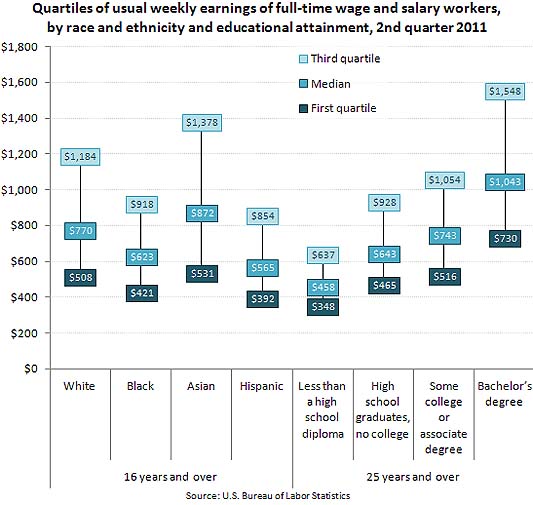 Let’s put aside for a moment the Bachelor’s degree set. Let’s instead look at the “some college or associate degree set.” Those are the people we should be most concerned about when it comes to our cajoling them into going to college. The lowest earners among them earn $516 a week. That’s certainly better than those who earn $465 a week, who can deny it? Unless you realize that in order to get that “some college or associate degree,” which earns them a measly 50 bucks more a week (a mere $2,800/yr salary increase), they might have had to take out loans. In other words, they might be earning a higher wage, but they’re not keeping that wage increase. In fact, they may have less money.

The loan question skews the entire chart. Would it be better to earn more and take home less? Maybe? I suppose if we want to assume that the quality of work will be better. But then again, is your quality of life better if you live under the gun of your college debt? Are we really defining economic success as revenue in, rather than some consideration of revenue and debt? Isn’t that the kind of thinking that causes governments to have debt crises?!

I’m not faulting Rampbell for contributing to the cycle — I just don’t think this is a particularly telling chart. Discussions about whether college is “worth the investment” should take into account how students pay for college. And it may be worth it to go to a four-year college that has a lower price tag (or just spend your first two years at a community college, then transfer), so that way you’re not saddled with six-figure debt once you’re done with college.