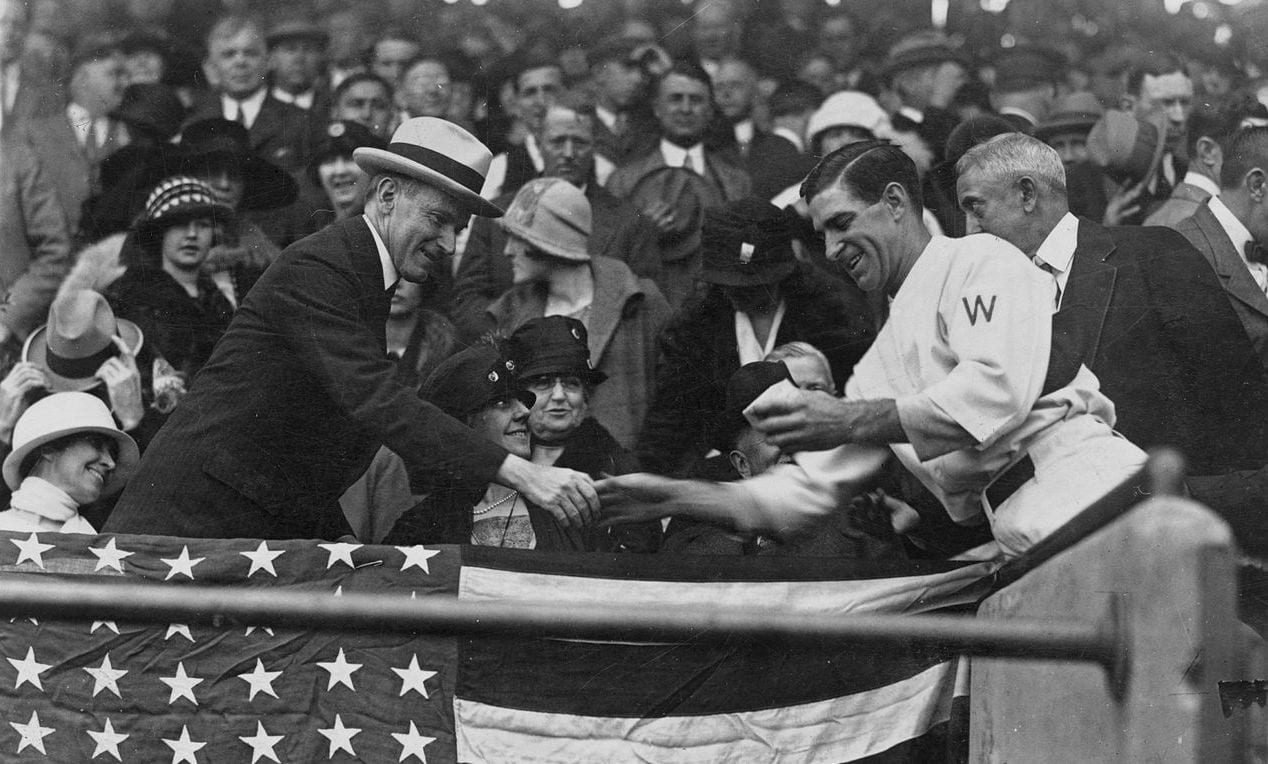 When Washington was in town, the drill was always the same: Play hooky; 15¢ for a bus to the Staten Island Ferry; a nickel ferry ride and 15¢ more for the BMT to Woodlawn and Jerome avenues. As the subway erupted into sunlight from the bowels of the Bronx, this 12-year-old kid wearing his navy blue hat with its white “W” would confront the Citadel of Baseball, proud and austere with its eagle logos, bristling with pennants. The House That Ruth Built was home to the team I rooted against.

Through the turnstiles, down dark alleyways smelling of beer and cigars, and suddenly you’d burst upon this hallowed expanse of green. In the outfield were memorials to The Babe, Lou Gehrig, and Miller Huggins. Billy Crystal once quipped, “I thought they were buried there!” All us kids thought that.

Ninety cents got you into the bleachers, but general admission cost only $1.30. From there, after a couple innings, you could sneak into an empty $2.50 reserved seat or, if attendance was light, a $3.50 box. Now and then the visiting Senators would get ahead, and scary Bronx voices would holler: “Hey kid — the Washington section’s in the bleachers!”

Don’t get me wrong. All us New York kids backed a home team, but in those days we had three choices, and I chose the Giants. The sure-winner Yankees were too easy to root for. When I discovered baseball, they were all-dominant, winning five straight pennants and World Series from 1949 to 1953. The Evil Empire, even then! I preferred underdogs.

I looked around for an American League rival, and my eye fell upon the Washington Senators. (Officially they were the Nationals until 1956, but everybody called them the Nats.) I liked their uniform with the big navy blue “W.” Why not? In the early 1950s the Nats were good, if not great. Decent pitching, light hitting.

Once, in July 1952, we found ourselves only five games behind the Yanks. Manager Bucky Harris was interviewed: “Could you guys actually win the pennant?” Bucky laughed, but I was euphoric. Maybe! Alas, we finished fifth at 78-76 — the original Senators’ last winning season. After 1960 they moved to Minnesota and became the Twins. An expansion team took their place, and when I lived in central Pennsylvania I drove down to a few games. They had only one winning season, and after 1971 they hied to Texas to become the Rangers. Bummer.

Better Than Everybody Thinks

Long before then, this kid with his “W” hat had memorized Washington baseball’s great days — and there were many. In the decade 1924–33, the Senators, Yankees, and Philadelphia Athletics owned the American League. They won every pennant — three, four, and three respectively.

In 1924, the Nats won a seven-game World Series — improbably. Trailing 3-1 in the eighth, player-manager Bucky Harris smashed a grounder to third that hit a pebble, deflecting over the Giants’ Fred Lindstrom, scoring two and tying the game. Next Bucky brought in the aging veteran, Walter Johnson, “The Big Train,” who pitched four scoreless innings against the formidable Giants.

In the bottom of the 12th, Nats catcher Muddy Ruel rifled a double. Walter Johnson (who usually hit for himself) reached first on an error. Incredibly — impossibly — Earl McNeely came up and hit another grounder to third that took another bad hop over Lindstrom and Ruel lumbered home! I’m sure it hit the same pebble — because God put it there, and as everyone knows, God is a Nats fan.

The Senators won in 1925 and 1933, but lost both of those Series. In ’25 they blew a three-games-to-one lead to the Pittsburgh Pirates. In ’33 the Giants took revenge, winning handily, four games to one. 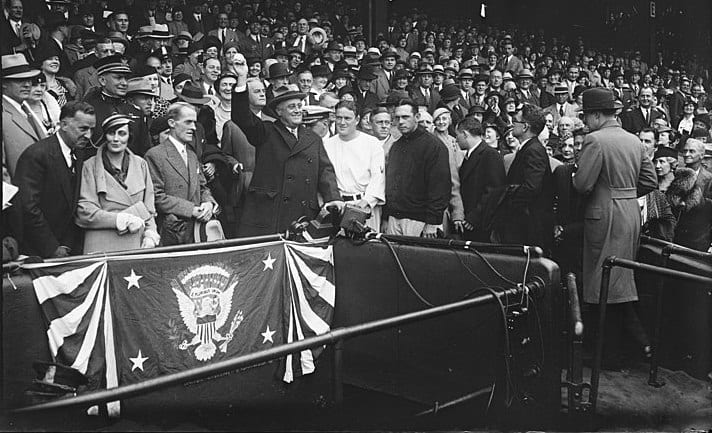 If today’s Nationals had ended up playing the New York Yankees, it would have been a “rubber” World Series matchup between Washington and New York — but between different teams from opposite leagues, since franchises have changed and moved. But business arrangements mean nothing to Washington fans. Above Nationals Park, we’ve always flown our three pennants, and now there’ll be another one flying beside them.

The Senators nearly won their fourth pennant in 1945 and were mostly respectable thereafter — until 1955, when they finished last — likewise in 1957–58. This earned them the sobriquet “First in War, First in Peace, and Last in the American League.” That’s not really fair — they were better than that.

As life unfolded, I drifted from baseball, especially after the Giants fled to Frisco and the expansion Senators flopped. Once, in the Eighties, I tuned in a game, only to find a guy batting who didn’t play the field, called a “Designated Hitter.” What is that? I wondered. Evidently an excuse for expired roosters who can’t field but still can hit, to thrill a dozen fans with a few leftover home runs. Sacrilege!

In my opinion, a DH ruins a game. Excusing pitchers from hitting removes one of the key strategy decisions — when to pinch-hit or bunt. As a result, bunting is almost a lost art. Even in my beloved National League, I fume as I watch professional hitters square away before the pitch, giving away the element of surprise that is the essence of a good bunt.

Then, suddenly, in 2005, Washington had a baseball team again — complete with the old curly “W” logo and again called the “Nationals.” This time they were in the National League, where pitchers still bat. Nostalgia drew me back. Avidly I watched them play .500 baseball that first year — the same as they did in 1953 for old Bucky Harris.

Everybody knows the rest of the story. It took years of trying — frustrating years, including four when we never got past a division series. It took a hellish, Senators-like performance in April and May that left us 19-31 after the first 50 games. Everybody was saying, “It’s over again.” It took one of the most incredible comebacks I’ve seen since my Giants surged from 13 1/2 games behind to wrest a pennant from the Dodgers in 1951. Come to think of it, the 2019 Nationals just whupped those Dodgers again!

Winning the pennant for the first time in 86 years was mainly about stepping up. All our guys did: brilliant starts, solid relief, fine fielding, clutch hitting from the most formidable offense Washington has ever seen. Bless them all, from fans old and new, who prayed for this moment. 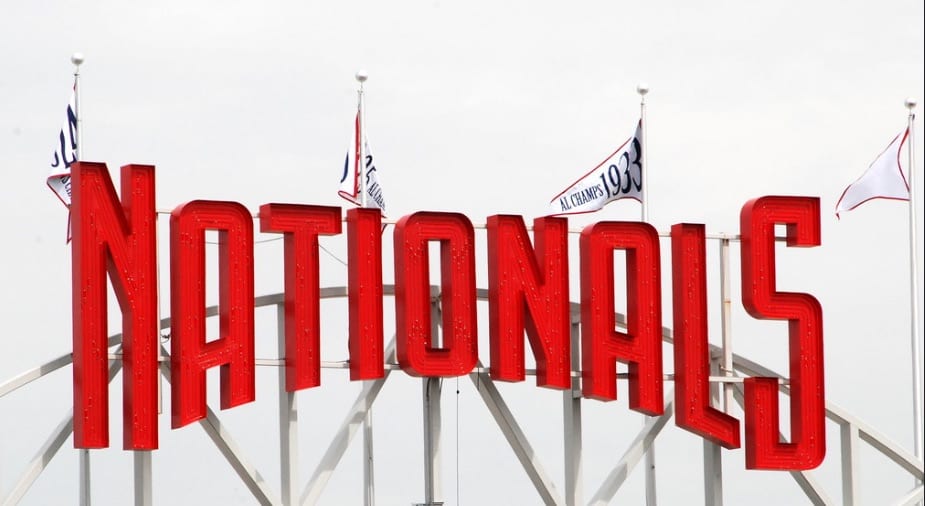 Full circle: for years we fans have watched three pennants fly at Nationals Park. On the fourth flagpole they flew a blank one. Not anymore! (Photo: Kevin Harber)

High above in their Field of Dreams, old Senators must be intoxicated. Player-manager-owner Clark Griffith, the “Old Fox,” who raised the team from cellar to championship, is envying today’s owner, Mark Lerner. Isn’t Max Scherzer, who also hits well, the pitcher equivalent of Walter Johnson — who likewise hit for himself? Aren’t our starters Stephen Strasburg, Anibal Sanchez, and Patrick Corbin the counterparts of Camilo Pascual, Pedro Ramos, and Early Wynn? Yes, all those greats were at one time Washington hurlers.

Is not Howie Kendrick’s 2019 bat the equal of Tris Speaker’s in 1927? Aren’t shortstop Trea Turner’s glove and bat as good as those of Joe Cronin? Behind the plate, who needs to choose between Rick Ferrell and Kurt Suzuki, between Muddy Ruel and Yan Gomes?

Anthony Rendon at third fields as well and hits much harder than the Senators’ “Walking Man,” Eddie Yost. And what outfielders! Juan Soto, Victor Robles, Adam Eaton, and Michael A. Taylor could be the counterparts of Sam Rice, Heinie Manush, and Goose Goslin — or, to put a more modern spin on it, of Roy Sievers, Harmon Killebrew, and Frank Howard.

What a season this has been: reviving old memories, creating new ones we’ll never forget. And now, please excuse me. I’m going to sneak into Minute Maid Park and plant a pebble on the third-base line — just in case.

Richard M. Langworth is Senior Fellow for the Hillsdale College Churchill Project and the author of 60 books. He dedicates this article to the memory of fellow Nats fan Charles Krauthammer, whom he knows is tuned in. 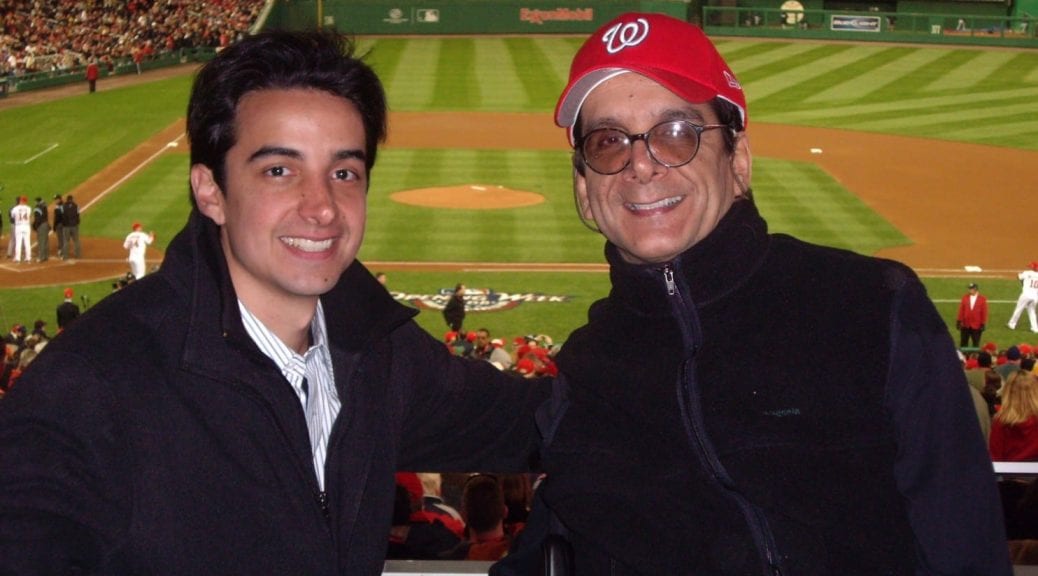