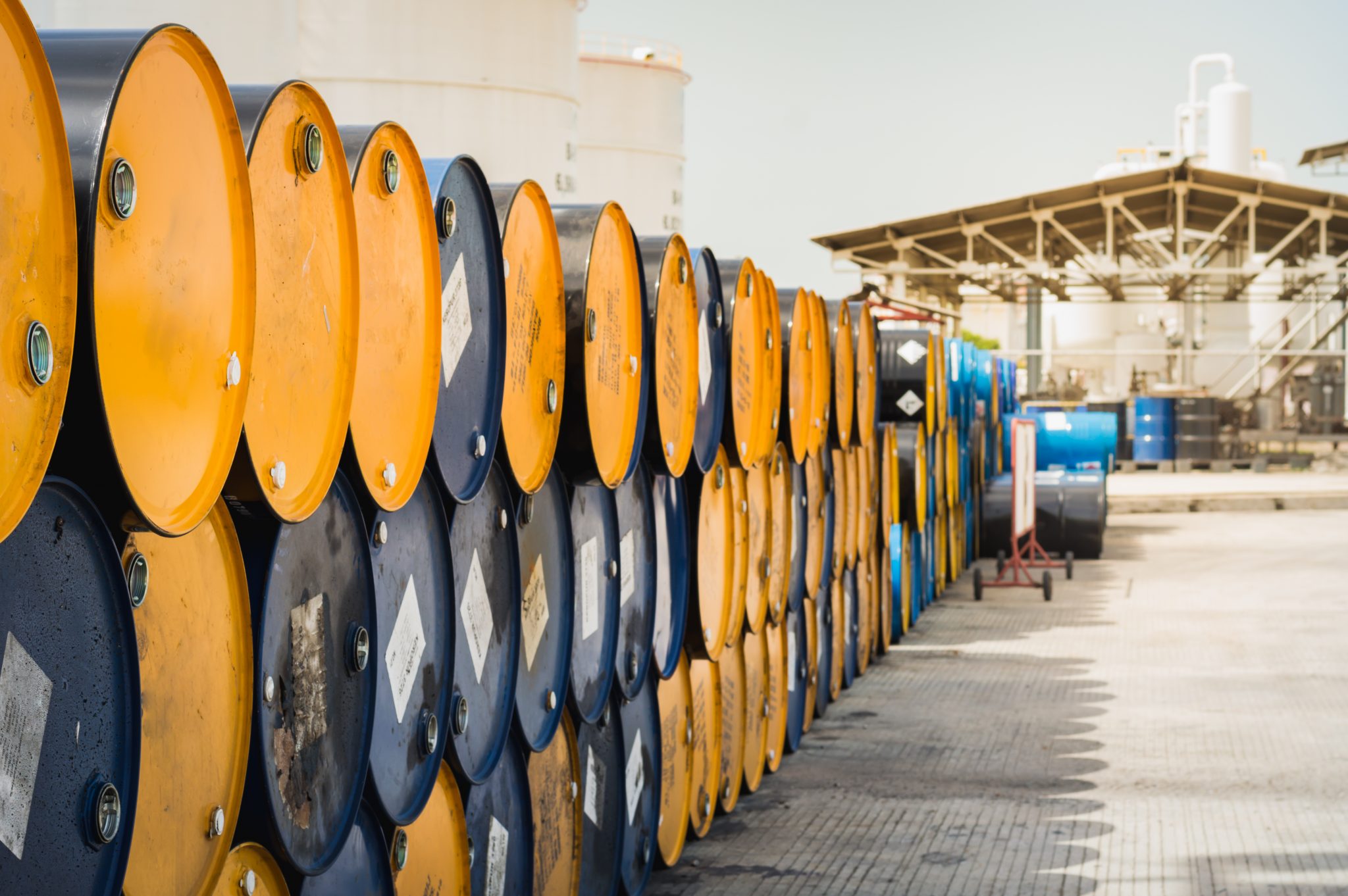 With all of the Wuhan coronavirus panic monopolizing the news in the past week, something that has the potential to be a truly earth-shaking geopolitical event was largely missed.

President Trump announced Friday that he was ordering the Department of Energy to buy up some 77 million barrels of oil to fill the Strategic Petroleum Reserve, the massive store of crude oil the federal government has stashed in salt caverns along the Gulf Coast. The SPR’s capacity sits somewhere in the neighborhood of 713.5 million barrels; currently, it holds about 635 million barrels after Congress demanded last year that oil be sold off from the SPR. The Department of Energy has the ability to store some 225,000 barrels a day of production. It’s been estimated that the effect of this buy-up could be to absorb some 430,000 barrels a day of demand. That’s the equivalent of someone opening a large oil refinery and putting production through it.

The announcement briefly halted an absolute slaughter in the oil markets, which began when Saudi Arabia announced it was ramping up oil production following a breakdown of talks between the Saudis and Russians over production levels. The Saudi-led price war, which they’re blaming on the Russians, functions as a direct assault on American shale-oil producers, who are some of the most innovative, technologically advanced, and efficient operators in the energy sector.

Trump is the first American president to look at the Strategic Petroleum Reserve the way a businessman would.

The problem with domestic shale oil is it costs more to produce than Saudi or Russian oil does, though shale producers have worked near-miracles in finding ways to get oil out of the ground at lower and lower costs. The Saudis have seen this, having tried during the Obama administration to drive the price down and wipe out the Americans. They tried and failed, and now they’re trying harder. In late 2015, the last time this price-war business was tried, there was about 360 million barrels’ worth of excess production. With the current Saudi–Russian assault on the markets, that number has been estimated to grow closer to 800 million barrels. Add the Wuhan coronavirus panic to the mix and nobody really knows just how much excess production vis-à-vis global demand there might be. One extreme forecast indicates as much as 12 million barrels per day – almost 15 percent of global production – would exceed demand as the coronavirus strangles the world economy.

But something is different now than it was a few years ago. There’s someone who understands business in the White House this time, and this situation falls well within his skill set.

Trump is the first American president to look at the Strategic Petroleum Reserve the way a businessman would. Friday’s announcement should be the first in a series of actions that puts the United States in control of the global oil market and manipulates it to the advantage of both American consumers and the energy industry.

The free market in oil, such as it was, disappeared in 1973 with the Arab oil embargo. It was then that no intelligent observer of that market could see it as anything other than a cartel market dominated by state actors, most of whom operate daily in bad faith.

That includes the Saudis and Russians, obviously, but the other members of OPEC are just as guilty.

You think of American oil companies as Big Oil. They aren’t. They’re Medium Oil. ExxonMobil isn’t even in the top five oil producers on earth. The real Big Oil is a collection of state-run oil companies controlled by the Mohammed bin Salmans, Xi Jinpings, and Vladimir Putins of the world. Those guys collude to fix the price of oil when they can. That’s the entire point of this current price war — the Russians wouldn’t agree to limit oil production and prop up oil prices because they want to put American shale producers out of business, and the Saudis at the end of the day decided to join the Russians. They might sound like they’re feuding, but both of them (and all the rest of the Star Wars cantina-scene characters controlling companies like Kuwait Petroleum Corporation, the National Iranian Oil Company, Petrobras, Abu Dhabi National Oil Company, and so forth) ultimately want exactly the same thing, which is to get rid of as many American producers as possible.

This is all coming after America took over the leadership in world oil production in 2018. This is geopolitics, not market economics.

Given those circumstances, the position that a U.S. president has to take a laissez-faire attitude toward foreign manipulation of the oil markets isn’t very defensible. We have more than enough experience in the effects that manipulation can have in our own economy; shocks in oil prices are a primary reason for the “shale revolution” in domestic oil production in recent years to begin with. And maintaining that production capacity given all the bad actors out there — who would dearly love to knock the shale producers out of the game and then drive prices up over $100 a barrel to reap a windfall in money and political prestige — is a national security imperative.

“The president’s move was sophisticated,” said Amy Myers Jaffe, director of the program on Energy Security and Climate Change at the Council on Foreign Relations, to the Washington Examiner. “He is signaling to credit markets that he is thinking about shale companies, but in a way that is not a social handout and sends a signal to our oil producing allies like Mexico that the president is cognizant of the instability created for countries from a disorderly oil market.”

She added, “The U.S. in effect is contributing a production cut because by putting the oil in the SPR we are taking it off the market. That is closest the U.S. can get to stabilize the market because the government can’t tell producers to stop producing.”

Trump’s action Friday is a good indication he gets it. The problem is, the SPR isn’t big enough to fully accomplish the strategic potential of the vision of which he gave evidence.

A month ago, Brent crude was trading at $57.67 per barrel. It had dropped to $34.36 by Monday, March 9. Trump’s announcement propped up the price to $35.44, but since then prices have collapsed further. Tuesday, Brent crude fell to $30.41, and as of this writing on Wednesday it was trading near $26. And West Texas Intermediate (WTI) crude, which usually goes for less than Brent, is hovering around $20.

Don’t be surprised if Trump tries to make more moves to expand the SPR’s capacity.

Get a big enough reserve capacity — not 713.5 million barrels, but three or four billion — and the federal government is in a good position to manipulate oil prices to American advantage using the SPR. It wouldn’t be totally out of line to think a Washington with enough vision and wisdom might actually be able to regulate crude prices to within a range that keeps foreign bad actors from successfully killing off domestic producers, while at the same time maintaining a stable supply of oil at an affordable price.

And if the Department of Energy is able to buy low and sell high, they might turn a buck here and there for the American taxpayer. Buy 77 million barrels of WTI at $20 and sell it at $45 when all this craziness is over, and you just made $1.93 billion.

It would be easy, and it wouldn’t be wrong, to castigate previous American presidents for not recognizing the potential and the wisdom of using the SPR as a means of giving a safe harbor to oil markets and domestic production. But the fact is, before a few years ago there wasn’t enough domestic production to justify the SPR as such a device. In 2014, U.S. oil production stood at around eight million barrels a day; it’s nearly 13 million now, though with prices and the world economy as they are it’s quite possible a quarter to a third of that production could end up shut in waiting for demand to drive the price back up.

Don’t be surprised if Trump tries to make more moves to expand the SPR’s capacity. There are lots of salt caverns out there that could be used to hold crude, and it’s fairly cheap to convert them for that use. According to a Bloomberg report, the entire SPR network of facilities cost just $5 billion. That could pay for itself several times over during the next few years if the Saudis and Russians keep trying and failing to kill American producers.

And don’t be surprised, either, if you start hearing about Trump slapping tariffs on Saudi oil to protect domestic producers. He’d be well within his rights to do so given the predatory nature of this price war.

Finally, don’t be surprised to see pushback from the president’s attempts to stabilize the oil markets. There is word that Congress will attempt to block an appropriation for the purchase of those 77 million barrels of oil, as there are Democrats who hate fossil fuels so much even something like this won’t meet with their approval. And should Trump impose tariffs on the Saudis, you’re going to hear “Protectionism!” from lots of corners, as though Mohammed bin Salman and Putin deserve to be treated like honest brokers in the free market.

Let them howl. This is smart policy, it’s good for the economy, it likely makes the federal government money over the long haul, and it potentially results in American control over the world oil markets on both the supply and demand side. It’s rare that the federal government has the opportunity and the means to do something smart, but this might just be an example. And if we’re talking about this as a campaign issue in the fall, with Joe Biden — who, let’s not forget, opposed the Alaskan oil pipeline as a young senator, long before he became senile and lost his mind — opposing it, then there’s real hope for us all.