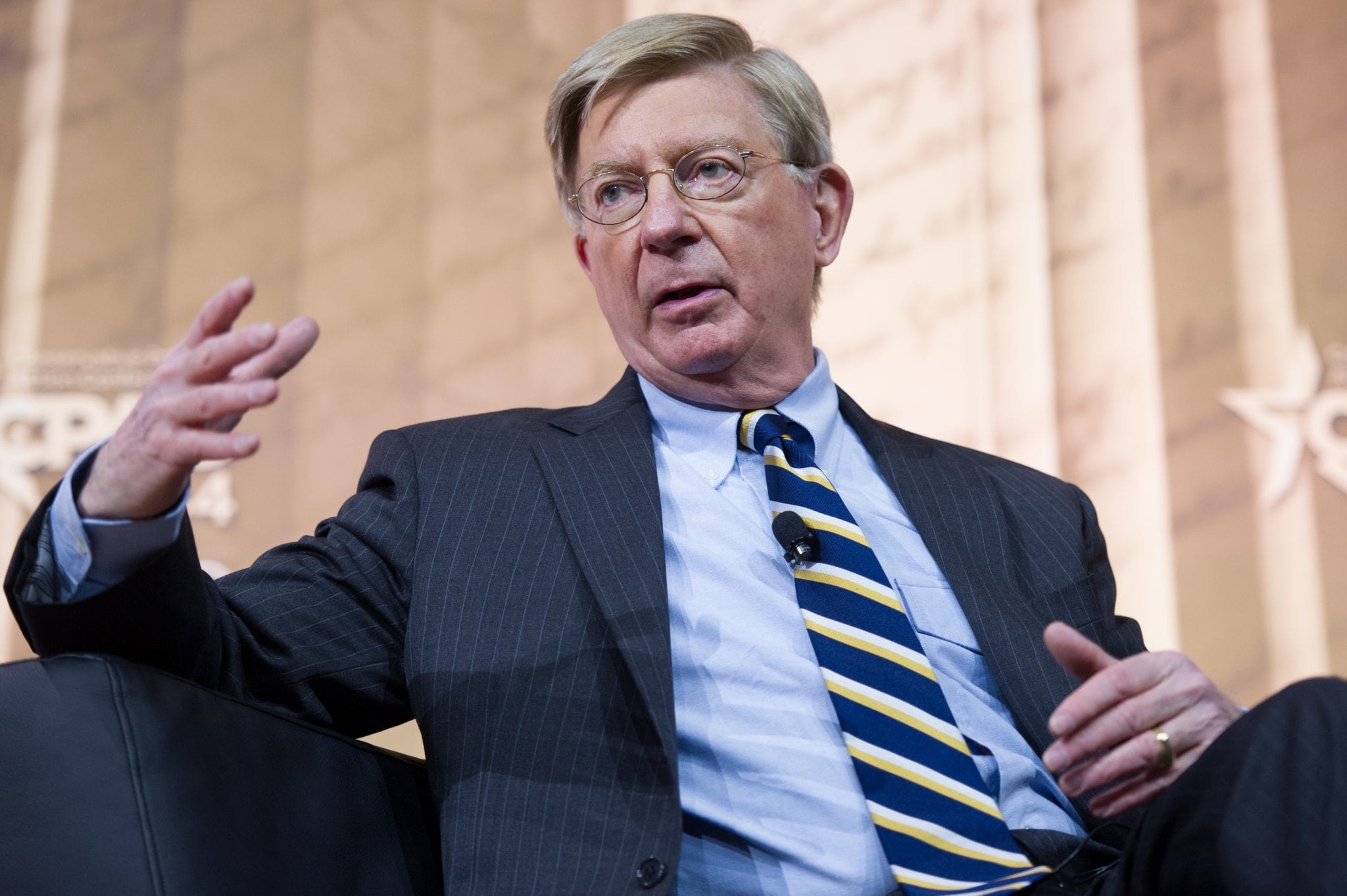 In a National Review column titled “Biden Is Well-Positioned to Offer Chaos-Weary Voters a Rest,” George Will welcomed the entry of former-Vice President Joe “Huggy-Sniffy” Biden into the peculiar pack pursuing the Democratic presidential nomination. Will notes some of the proposals made by other Democratic presidential wannabes which Biden may have to embrace to get the nomination. He suggests that Biden will, if elected, betray those issues and become a moderate. Let’s review a few of the things that Democrat candidates have proclaimed essential to creating their socialist paradise.

Some Democrat candidates believe felons, including murderers, should be allowed to vote. You might wonder why those who break the law should have a say in making laws, but if you do you are a racist fascist and may even own a MAGA hat. If you think that it’s not right that a murderer can vote when his victim no longer can, Chicago’s tradition of postmortem voting offers a solution. That city’s Democratic machine was once forced to use skullduggery to enfranchise the dead but now, to balance the murderer vote, they could openly return the murdered to politics. Democrat ward heelers could register murdered voters, then employ Ouija boards to divine who the deceased want to vote for from beyond the grave. Do you suspect the Democrat ward heelers might jostle the planchetteto get a spirit message to their liking? How cynical. You’re the kind of skeptic that thinks Democrats want felons to vote only because they expect them to vote Democrat.

Abolishing the Electoral College and the Senate

Progressives want to abolish the Electoral College for its failure to elevate Hillary Clinton to the presidency. She’d be gloriously giving us her version of Obama’s third term if the popular vote elected presidents. Similarly, Democrats aren’t happy that the Senate can deny the Democrat-controlled House of Representatives its will. Speaker of the House Nancy Pelosi would be nearly an American prime minister if it weren’t for the Senate.

Archaic institutions like the Electoral College and the Senate should be destroyed so that the states with large populations can determine the course of national affairs. To Hell with those states that don’t have any mega-metropolises with five star restaurants and hordes of free-range homeless people defecating on the sidewalks in front of them. States like California and New York know best and the rest of the country should just watch with admiration. That eliminating the Electoral College and the Senate would greatly empower Democrat-run states is just a coincidence. These states would never place their interests above those of a bunch of nobodies out in nowhere who don’t have the power to stop them.

In the 1930s, President Franklin Roosevelt had a lot of progressive ideas about ending the Great Depression. When the Supreme Court found some of these unconstitutional, FDR decided to add justices to the court so that it would vote the way he wanted. Congress, which then held some respect for the separation of powers, objected. If the president could pack the court, the judicial branch of government would be neutered. Roosevelt backed down, but today’s progressives are of sterner stuff. They want a president who’ll put another two, four, maybe 2,000 justices on the court — however many it takes to get decisions they like. If the Supreme Court has to assemble in a football stadium, so be it. Maybe the younger, more agile justices can put on some sort of half-time, synchronized gymnastic show during lunch recesses.

Children are our future. Everyone knows that and everyone knows college is where children learn stuff like the future will end in twelve years when everything will evaporate due to climate change. So anyone in the first grade today needn’t worry about their SATs, what AP courses to take, or whether debate team is a better extracurricular than track. None of that will help them get into the college of their choice, as when they leave high school a dozen years from now, all the colleges and everything else will, as mentioned, evaporate

The colleges existent today may cost as much as $100,000 a year, but a major in “Hating All Dead White Guys” with a minor in “Hating Most Living White Guys” is worth a king’s, or at least, a princeling’s, ransom. It’s so worthwhile that taxpayers should bankroll college degrees. That single mom who couldn’t go to university because she had to work as a waitress to feed her kids should be happy that a chunk of her paycheck will pay off someone else’s college loans so they can get a job better than hers.

The military-industrial complex gave us expensive military hardware but kept Communism away. What do you think the academic-political complex will give us when the government gives them truckloads of money? Administrators sitting atop giddily-tall pyramids of lesser administrators with all pulling six figures while the top gets seven? Professors teaching “Communism: Utopia or Wonderland?”

If you worked hard to pay off your student loans and will miss out on the Democrats’ new free ride, there’s a word for you: SUCKER.

There are lots of other things that the Democrats running for president are advocating: abolishing ICE (who needs borders), the Green New Deal (who needs oil), giving the vote to 16-year-olds (they can’t drive, buy cigarettes or beer, or watch sexy movies but let them vote), reparations for slavery (unbelievably divisive), and raising taxes on the rich (“rich” is getting defined downward toward the middle class, where those without Jedi-level accountants will get taxed into small heaps of ash that can be swept under the carpet in one of Bernie Sanders’ homes).

Will seems to think that if Biden is elected progressivism won’t influence him but Biden isn’t the kind of leader who could resist progressive pressure for the sake of America. He’s an opportunist, willing to do whatever it takes to win and keep power. Consider how he announced his campaign by angrily invoking the myth of Trump calling Nazis “good people” as his reason for running. Anyone with a memory better than a goldfish’s knows the myth is a lie, but it has been repeated so often that many have become big, fat, bubble-blowing goldfishes.

Will admits Biden’s attempts to project anger are “transparently, and engagingly, synthetic” but that’s okay with him. He claims Americans are “embarrassed and exhausted” by Trump’s chaos. Biden, he says, will embarrass himself “but not the nation.” But Biden would.

Biden’s past is littered with incidents that should embarrass anyone associated with him, including plagiarizing a speech by Neil Kinnock, former-leader of Britain’s Labour Party, bragging about using the office of the Vice President to bully the Ukrainian government to benefit his son Hunter Biden’s company as an example of his geopolitical toughness, and falsely claiming the car accident that tragically killed his wife and daughter was caused by a man who “drank his lunch” despite knowing the man wasn’t drunk or responsible. That’s just the kind of guy “Middle Class” Joe is.

Biden is the used car salesman who sincerely grins and claps your back and wants to be your pal then sells you a car fished out of the river that he swears “runs like a dream.” He’s the creepy uncle who gets too close to your wife or daughter in a situation where it’s awkward for her to slap his face. He’s a loose cannon that even Obama knew enough to keep away from anything important. Despite his being a disaster-waiting-to-happen, Will believes Biden “might seem to weary voters to be something devoutly desired: restful.”

Nations don’t get to rest. Few national problems are tidied away without great difficulty and they often return in mutated, more troublesome forms. The bombastic, turbulent Trump is no Mr. Rogers but he is battling ferocious opposition that would drive any other politician to the bughouse. Consequently, his presidency isn’t restful. Mr. Will might want to forget about what Trump’s enemies are trying to do, snuggle under his blankie, and take a long nap, but responsible citizens can’t. Who knows what might waken us.