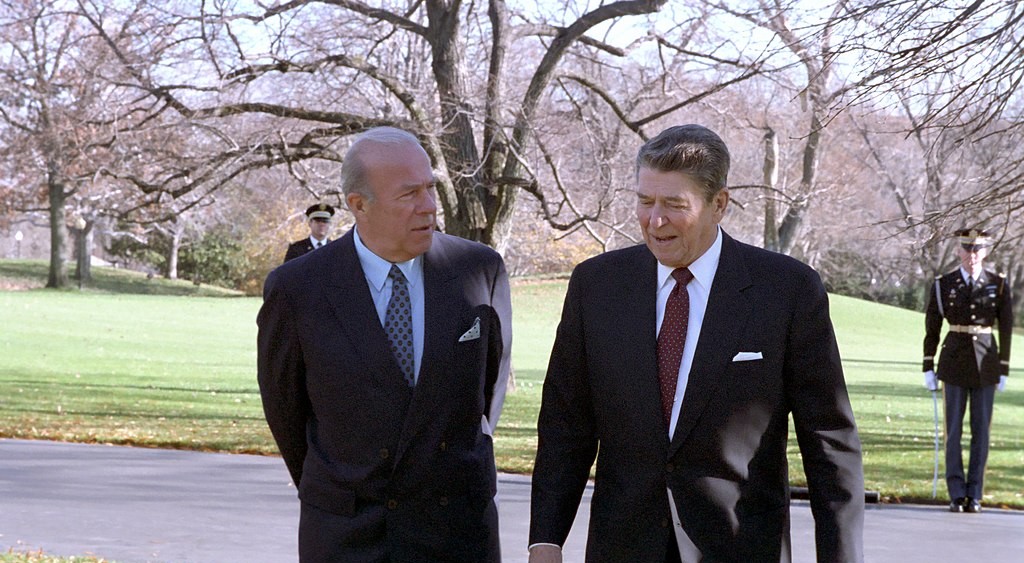 Yesterday, I awakened to the sad news that George Pratt Shultz, gigantic fixture in American public life, possibly the last surviving member of what used to be called “The Establishment,” before “The Establishment” was composed of billionaires with hearts filled with motives of anger and revenge, had entered immortality at age 100 in Northern California.

Secretary Shultz had been a close friend of my parents, Herbert and Mildred Stein, since at least the late 1940s, having to do with some connection with the Committee for Economic Development, a group of uber-prominent businessmen and businesswomen and labor leaders. My father was research director, and Professor Shultz was involved in some gigantic way.

When times changed and Mr. Nixon, my hero of all time, made Professor Shultz the first head of the newly minted Office of Management and Budget, he worked closely with my father, a member and then Chair of the Council of Economic Advisers. His wife, “Obie,” and my late mother were extremely close friends. His daughter, Meg, was a friend and neighbor of mine in Glover Park, next to Georgetown.

I owe Secretary Shultz a great deal. By 1973, he had become secretary of the Treasury. I, a young lawyer, was in deep depression about my career and my personal life. I would even say I was in a suicidal depression. My parents were about to go to Tokyo for a conference. They asked Secretary Shultz if he would take me on his Treasury Department plane (a 747 if I recall right) and it had beds. He cheerfully agreed, especially since that would mean a companion for his charming daughter for touring around Japan.

I got to sit next to a man I truly idolized, the handsomest man on the planet, Peter Magnus Flanigan, in charge of trade issues for Mr. Nixon. Peter, a spectacularly smart man, heir to a stupendous fortune, summa at Princeton, was another close pal of my parents. Sitting next to him on a long flight was like sitting at the right hand of Jesus.

To be around Peter Flanigan, to be on a plane with beds, to swim in Hawaii on the way back in warm Pacific water was bliss. By the time I got back I felt like a new man. I was a changed man.

All thanks to George Shultz and my glorious parents and to a real divinity, Peter Flanigan.

George Shultz changed my family’s life in other ways, too.

When he was secretary of State under the great Ronald Reagan, Eretz Israel was struggling with intense inflation. Secretary of State Reagan sent my father, along with a super smart economist named Stanley Fischer, to Israel to help.

After many meetings with top Israeli officials, Pop and Dr. Fischer created a plan (kindly called the Stein Plan), to reestablish a new Israeli Shekel backed by the United States. The plan worked like a charm. Even now Israelis — thanks to Secretary Shultz — consider the Stein Plan salvation.

April 21, 1997, my mother entered eternal life. My father had been married to her since the late 1930s. He was lonely on the planet even though my wonderful sister and I spoke to him many times a day and visited him often. He felt as if his days on Earth were now meaningless.

Up stepped George Shultz. His wife had passed several years before, and now he was getting married to a prominent civic leader in San Francisco. To my father’s delight, Secretary Shultz invited him to the wedding. My father was inside again, and he was happy.

Now, I know Shultz had many accomplishments as a major power player everywhere he went. But he was a friend as well. A war hero at the cruel Battle of Angaur in the South Pacific. A genius at economics. There is no one like him in today’s world, and he will be missed forever. He was, like Nixon, like Peter Flanigan, like my parents, a star.