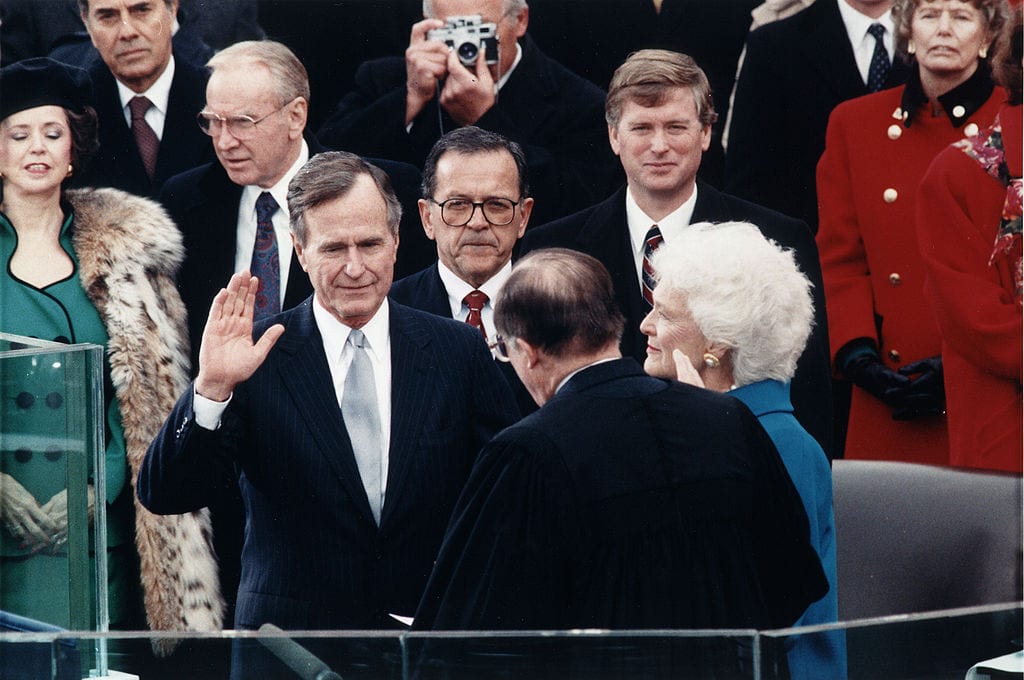 Say what you will, but George H.W. Bush was a politician. But he was also, for lack of a better word as applied to our politics, a patrician. A classy guy, in other words. And so he died late on a Friday, too late to become the day’s story, and when it broke most news outlets had gone to bed and TV news bureaus had to scramble to get something up. Fox News fortunately had Shannon Bream, and she was genuinely moved, and the ultimate pro Bret Baeir was available by phone, as were later Chris Wallace and Karl Rove. Fox’s video file was sparse, and the spool kept showing the same pics and clips, as if the network hadn’t prepared for the 41st president’s departure. But better to watch Fox than CNN, which soon had Don Lemon anchoring its late coverage. He was wearing dark rimmed glasses, as if to project some much needed gravitas. The theatrics were for naught. He didn’t have much to say, beyond the clichés we’ve been hearing ever since, about the elder Bush being a statesman and decent man and someone willing to cross the aisle and reach for compromise and act responsibly. Above all, he was a “public servant.”

But better late than never? How many of the journalists and other Washington types now gushing about Bush’s goodness and greatness ever voted for him? Or out of their deep respect for him didn’t spend the eight years of his son’s presidency throwing rotten eggs at George W. Bush?

Now that we know where we stand, there’s no reason not to be genuinely saddened by the first President Bush’s death. His career spanned an era, beginning with heroic service in World War II and continuing with modest political success in Texas and in higher echelons in Beijing and at CIA and a presidential run that saw him balance Ronald Reagan’s ticket as vice president over two terms.

A milestone for us was his presence at The American Spectator’s 20th anniversary gala in 1987. He needed to shore up his conservative bona fides, I presume, as he prepared to begin his run to succeed Reagan in the presidency. He spent the whole long evening with us, delivering the keynote address after dinner. I can’t recall what he said from the podium, but I very much remember the impression he made on my wife and me when we met him at a pre-dinner reception. I went away from the encounter thinking that if every American had a chance to meet him in person, they’d never vote for anyone else. He was charming in the best sense, pleasant, relaxed, gracious, a genuine gentleman, extremely likable. Taking note of our Polish connections, he said we should meet the woman who helped arrange his recent trip to Poland. (A trip, incidentally, that proved very important in restoring Solidarity as a force in public life and helped prepare the way for communism’s demise in that country.) The woman was at the reception and we were introduced. Soon enough, a warning sign went off. “The Polish authorities were so gracious, they even allowed us to meet with dissidents,” she said, in unfortunate State Departmentalese. Okay, so she wasn’t exactly conservative. But one always hoped Mr. Bush would know better.

Two months after his inauguration as president, he spoke at our annual dinner in March 1989. This time he didn’t spend the entire evening with us. A president is a busy man, and so his remarks — on education and how throwing money at problems doesn’t necessarily do any good — were delivered before dinner was served. And then he left, a political debt repaid. He was wonderful at that.

And he knew how to deliver a message. A few months later, his vice president told the Wall Street Journal in an interview, apropos his reading habits and conservative publications, that he found The American Spectator “hard to get through.” Next thing you know we were running a cover drawing headlined, “Why Danny Can’t Read.” I’ve always assumed the accompanying story wouldn’t have been written without the president’s approval. Of course, I could be wrong.

Three or so years later we saw the president again at a dinner honoring a Louisiana Republican who was gravely ill. It was attended by a who’s who of New York and Washington, and Mr. Bush was coming off his huge success in the Gulf War. At the pre-dinner reception line he seemed to recognize my wife and me, and asked me about Bob Tyrrell, who was late in returning from New York. Later, during the dinner, he teared up when talking about his friend from Louisiana. Another genuine human reaction which, looking back, I’ve always thought an ominous sign of the sad political fate awaiting him in 1992. For what it’s worth, I just loved it when he checked his watch at the ghastly Richmond debate late in the presidential campaign. He was classy, yes, a patrician, and no one could take that away from him.