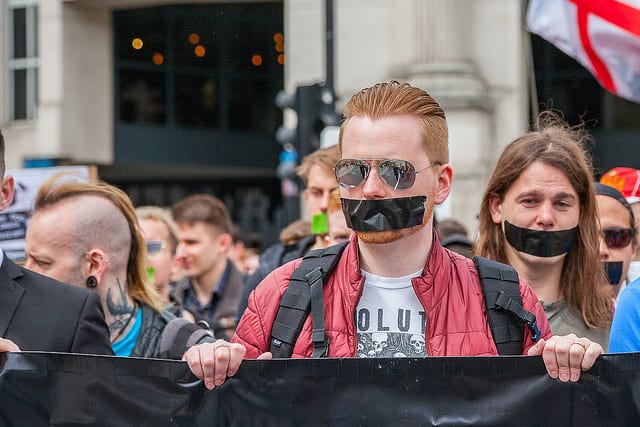 The United Kingdom is in the process of becoming a nightmarish glimpse of what could happen in the United States if we aren’t careful and vigilant.

The once proud and free empire now seems as if it is determined to become a cheap imitation of a Cold War-era totalitarian state. For the last several months the headlines coming from Britain read like bad satire from a knock-off of The Onion.

The assaults on freedom in the UK come from all over the place these days. Recently, London Mayor Sadiq Khan has taken up knife control as a cause:

No excuses: there is never a reason to carry a knife. Anyone who does will be caught, and they will feel the full force of the law. https://t.co/XILUvIFLOW

Never a reason! It’s unfathomable that the humble knife has endured for over 4,000 years given its relative uselessness.

I carry a pocket knife everywhere I go except on airplanes (they’re still sticklers about fun). It’s quite functional. I open packages for myself and others with it. I cut fruit with it. It comes in super handy on hikes, even though I usually have a much bigger knife with me too. If I had to move to England, this little bit of convenient functionality would suddenly become some sort of mini WMD or something.

To be sure, Khan and the idea of knife control are both ridiculous, but not quite as ridiculous as sending a guy to jail for eight months for flipping off a traffic cam:

Top tip: If you want to stay out of trouble, don't do what this driver did and swear at our mobile safety cameras while driving past in a car fitted with a laser jammer. Today he's beginning 8 months in jail for perverting the course of justice. https://t.co/Y5jpeOlt96 pic.twitter.com/rKQRVgNkB1

Giving the finger is “swearing” now. They’re clamping down on speech when it isn’t even speech. A state that thinks getting flipped off is having its course of justice perverted is a state with a perverted sense of justice.

The tone of that warning from the police is so overwrought that one shudders to think of how they might react if the situation were truly serious.

The case of mild YouTube sensation Count Dankula hits more directly at free speech. The pertinent details are summarized here, the main point being that he was offensive and nothing more. Having been a professional stand-up comic for a few decades now, I value my right to offend perhaps more than the average member of society does. I didn’t find what Count Dankula did entertaining or humorous, but I certainly don’t think that a society that purportedly values free speech should have legally harassed him for two years because he’s an offensive tool.

By far the most frighten infringement upon the freedoms of Her Majesty’s subjects is what is being done to babies and their parents in the name of affordable health care.

Most Americans became aware of this horror show last summer through the tragic story of Charlie Gard, a baby with a rare disorder that, admittedly, didn’t have a favorable prognosis. His parents, of course, wanted to exhaust every medical possibility in an effort to save their son.

The British government, its medical personnel, and its courts decided that the parents shouldn’t have that right.

Charlie’s parents raised enough money to cover the cost of transportation to the US to get an experimental treatment for him. The UK hospital where Charlie was being treated intervened, because the law allows it in England, and told the suffering parents “that it was not in the best interest of their patient.” UK courts not only backed them up, but decided when Charlie should be taken off life support.

This nightmare scenario is now being replayed for the parents of a toddler named Alfie Evans. Again, the parents want to take their child out of the UK to receive alternative treatment but have been told by their Soviet-esque High Court that it is not an option. Alfie is now not being fed, and his parents can’t do anything about it:

“the child has not been given nutrition for nearly a day.”

This child is being starved against his parent’s wishes because his brain doesn’t work typically. https://t.co/mMXGJbRy0l

This is all too much for me to wrap my head around. When I first read about Charlie Gard I mentioned that I had never really been affected by anything in the news like that before. I consume news all day, every day and it all washes away from my mind in a hurry. These stories, however, hit me in my gut.

We may be tempted to dismiss all of the above because it’s happening in the United Kingdom and we have any number of reasons why think we won’t go down that path.

We’re already seeing a full-frontal assault on free speech. The liberal social media mob seeks to silence any voices with which it doesn’t agree, and is usually successful. Progressives continue to get any speech they don’t like legally classified as hate speech.

The Second Amendment is being assailed by a political class that has always been coy about its endgame but is becoming more bold about the fact that, yes, they do want to take our guns. Now they’ve found — and are actively promoting — a group of pubescent human shield puppets to vocalize their agenda for them.

Now that they have been almost completely hijacked by the progressives, even mainstream Democrats are now pushing for single-payer health care. Once the government has complete control of the reins of medical care in this country rationing and sickening stories like those of Charlie Gard and Alfie Evans will be being told here as well.

And let us not forget the Euro-fetishism of the American left. They want us to be like the UK. None of the above sounds bad to them.

They do, however, have a particular distaste for real freedom.