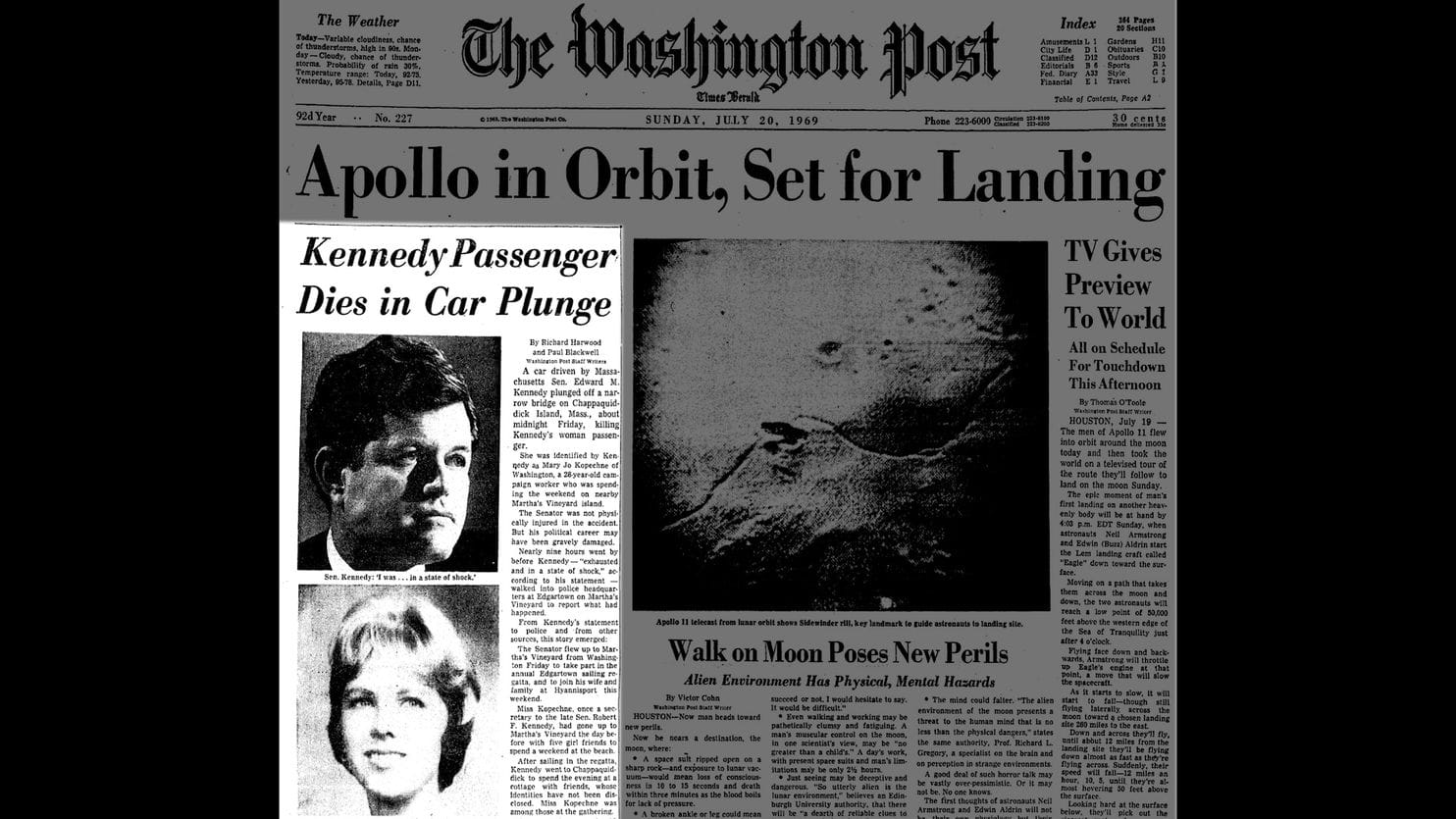 Man ascended to the glorious heavens and sank to the murky depths 50 years ago this weekend. The juxtaposition serves as a metaphor for modern times, when our technology races to infinity and beyond as our behavior periodically knuckle-drags toward barbarism.

On July 20, 1969, Apollo 11 landed on the moon, and a few hours later, on July 21, Neil Armstrong, and then Buzz Aldrin, bounced on the regolith-over-rock surface of our only natural satellite. They spent more than 21 hours walking on the moon. The hard part followed the pedestrian part. The Eagle took off, linked up with the Apollo 11 command module in lunar orbit, returned to Earth’s gravitational pull, and splashed down in the Pacific.

Less than 66 years after the Wright brothers’ first flight and 42 years after Charles Lindbergh crossed the Atlantic solo in the Spirit of St. Louis, man had somehow flown to a heavenly body without water, oxygen, and atmosphere 239,000 miles away — taking a stroll, planting a flag, and collecting nearly 50 pounds of souvenirs while there. What boys reading Galaxy Science Fiction, listening to Dimension X, and visiting Walt Disney’s Tomorrowland dreamed about in the early 1950s they accomplished as men in the late 1960s.

Perhaps President John Kennedy most embodied this “If you can dream it, do it” mentality. While Eisenhower had launched the National Aeronautics and Space Administration, his successor dared pledge his nation to put a man on the moon by the end of the 1960s, a pronouncement not without the possibility of egg-on-the-face consequences given the decided possibility that the same Soviets who beat us putting a man in space would also beat us to the moon. Ironically, the same weekend Americans amazingly fulfilled Kennedy’s audacious promise, the promise of Camelot was extinguished.

A half century ago this morning, Sen. Ted Kennedy drove Mary Jo Kopechne, a 28-year-old former aide to Sen. Robert Kennedy, off a bridge and into Poucha Pond. The senator’s main failing came in neither organizing a party for married men and unmarried women nor drinking and driving (without a license and with a chauffeur available), but in consciously deciding not to get help for Kopechne lest it reveal his misdeeds. He placed his political interests above the life of a woman who sacrificed for his brother and his party.

“She didn’t drown,” the diver who retrieved Kophechne’s body from the Oldsmobile Delmont 88, maintained. “She died of suffocation in her own air void. It took her at least three or four hours to die. I could have had her out of that car in 25 minutes after I got the call. But he didn’t call.”

Only he did call. He called his German girlfriend. He phoned his lawyer. He reached out to political advisers. He narced on partiers to the front desk from his motel room. But he never called first responders of any sort.

Fortunately for the politician, the lunar landing eclipsed the vehicular homicide. One of the biggest stories of the 20th century relegated Chappaquiddick to below the fold. Unfortunately for Kennedy, the story eclipsed everything he did in almost 50 years in elected office. It’s the first thing everybody thinks, whether they admit it or not, when thinking of Ted Kennedy. The presidency, which his more strident admirers regarded as a fait accompli, eluded the youngest Kennedy brother largely because of the event.

We can always return to the moon. Going back to solid ethics, morality, and behavior proves more difficult.