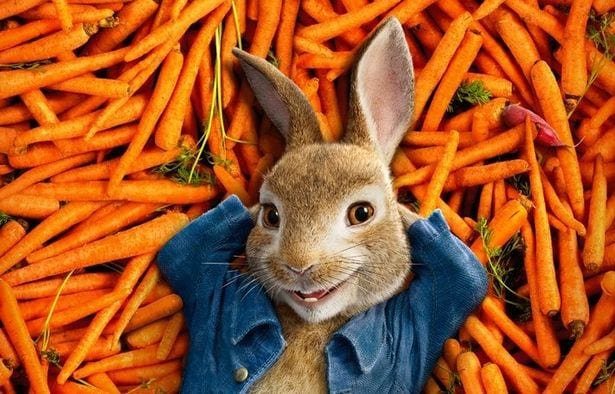 “For one vital element of humor is inequality, and striking visual, aural, and physical differences,” Paul Johnson writes in his slim 2010 book Humorists. “Differences in sex, age, color, race, religion, physical ability, and strength lie at the source of probably a majority of jokes since the beginning of human self-consciousness.”

If this is true, then the majority of jokes necessarily draw frowns rather than laughs in our scolding, schoolmarmish society—at least they do when we know the laugh monitors look.

Consider the campaign to boycott the PG-rated Peter Rabbit children’s movie. Moviegoers remain numb to over-the-top violence and gratuitous sex that characterize so many post-Hays Code films. But insensitivity to food allergies? That takes things too far.

The Facebook page of the Kids with Food Allergies Foundation explains:

The new movie, Peter Rabbit, has a scene that may be disturbing to young viewers who have a food allergy. A character is intentionally attacked with his allergen, leading to anaphylaxis and the use of epinephrine. Parents should be aware of this before your children see the movie so you can talk with your child(ren) about it.

[Kids with Food Allergies Foundation] believes that food allergy “jokes” are harmful to our community. During a reaction, patients require the life-saving drug epinephrine and must go to the nearest hospital for follow-up treatment. The very real fear and anxiety that people experience during an allergic reaction (often referred to as an impending sense of doom) is a serious matter. Making light of this condition hurts our members because it encourages the public not to take the risk of allergic reactions seriously, and this cavalier attitude may make them act in ways that could put an allergic person in danger.

Sony apologized. Perhaps we should give thanks that the media conglomerate did not bowdlerize the picture. But so many sorrys means so many more sorry people carping on this, whining about that.

If Flopsy, Mopsy, and Cottontail—to say nothing of Mrs. Tiggy-winkle, so sensitive when cast in porcelain—could labor under conditions that compelled them to glimpse a poor farmer endure a blackberry pelting, perhaps the child audience, and their overprotective parents, can deal with the visual, too.