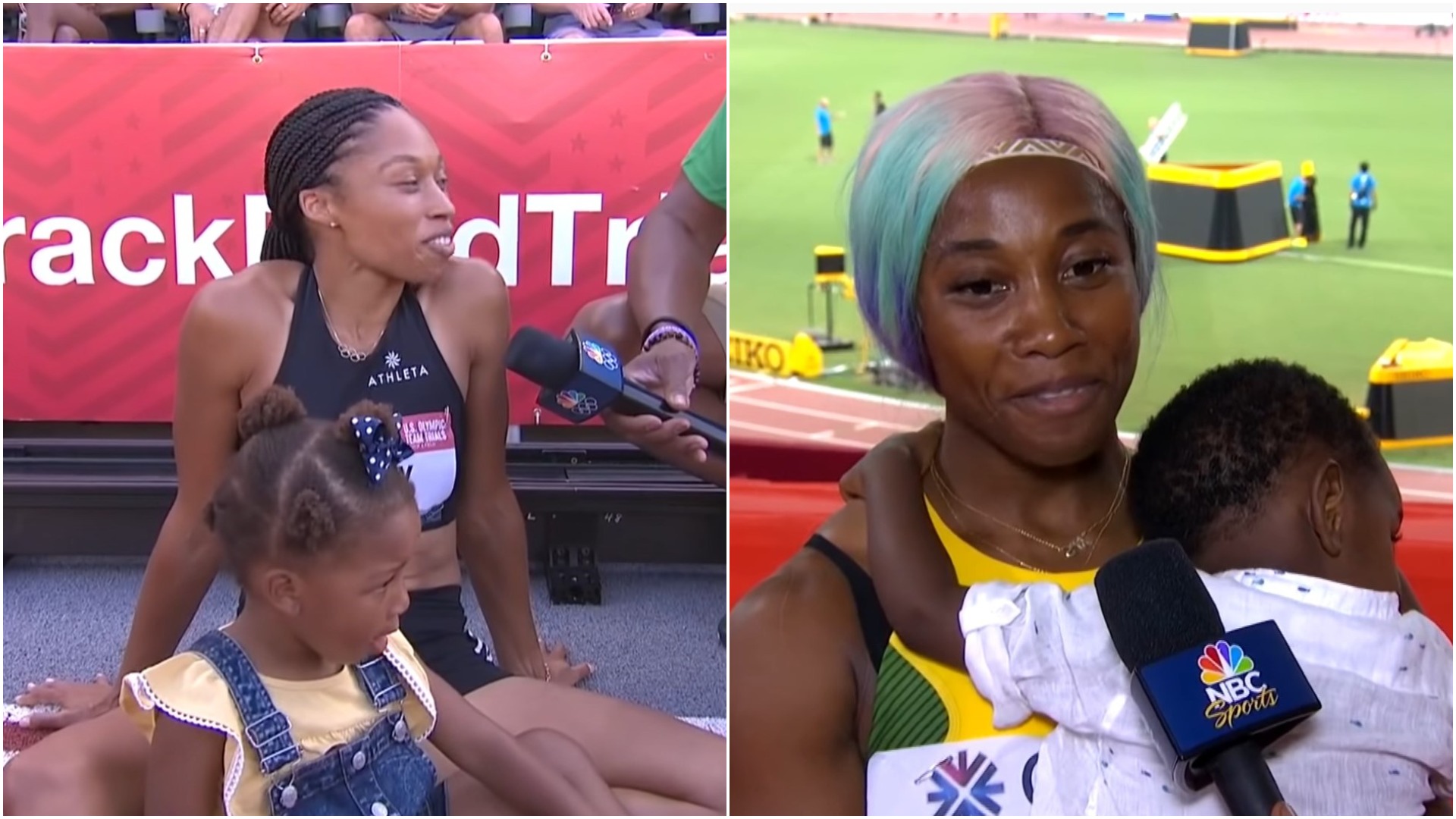 Mothers are dominating at the Olympics, and their children are only encouraging them to reach greater success. Shelly-Ann Fraser-Pryce of Jamaica and Allyson Felix of the United States are just two women who work double duty as track and field stars and devoted mothers to their children.

In a progressive culture that consistently demonizes motherhood as a setback or as less than advantageous, they both serve as a wonderful testament to the beauty and purpose found in motherhood.

Fraser-Pryce, a 34-year-old sprinter and “Mommy Rocket” won silver on Saturday in the 100-meter final with a time of 10.74 seconds. Above all else, Fraser-Pryce prioritizes her 3-year-old son, Zyon, who often travels around the world with her to meets.

Fraser-Pryce reminisced on Facebook, “All my focus heading into training for my 2017 season was on getting healthy and putting myself in the best possible fitness to successfully defend my title in London 2017, but . . . here I am thinking about being the greatest mother I can be.”

American Allyson Felix also finds immense joy in her daughter as a track and field star. The 35-year-old has won nine medals across four Olympics, the most of any female athlete in U.S. track and field. Wednesday morning, she secured a spot in the 400-meter final. Felix is also scheduled to compete in the 1600-meter relay and 1600-meter mixed relay.

Giving birth to a child as an elite athlete is not easy, and it was made even more difficult because Felix was diagnosed with severe preeclampsia and had to deliver her daughter, Camryn, two months early via Cesarean section. Camryn is now a strong and healthy 2-year-old.

Felix attested to the beauty and purpose found in motherhood on Tuesday after she qualified for the 400-meter dash, saying, “It’s changed everything. It’s given me a different drive. I’ve had so many challenges because of it and so I think it’s even more meaningful now to be on this stage as a mom.”

During her pregnancy, Felix wrote a May 2019 New York Time op-ed accusing her longtime sponsor, Nike, of penalizing her and other pregnant athletes, and said her “natural desire for a family” resulted in the “kiss of death” from the company. Though the athletics brand made changes regarding its policies for pregnant and parenting athletes, Felix left to sign with Gap’s Athleta.

Fraser-Pryce and Felix both set compelling examples as career women with children, but Olympic hopeful Brianna McNeal provides a sad example of an athlete who decided to prioritize expediency over what’s right.

The 29-year-old, who won gold in the 100-meter hurdles in the 2016 Rio Olympics, experienced a series of setbacks and poor choices that barred her from competing at this year’s Tokyo Olympics. McNeal was provisionally suspended in January and consequently given a five-year ban two months ago for skipping a January 2020 drug test. McNeal said that she missed the drug test because she was on bed rest recovering from an abortion when the official knocked on her door.

The Court of Arbitration for Sport dismissed McNeal’s appeal and upheld its decision on July 2, barring her from competing at the games. She rebuked the appeal, explaining that she was “under physical and mental trauma” the day of the drug test.

She lamented, “Right now I feel excommunicated from the sport itself and stigmatized, and to me it is unfair. I just don’t believe that this warranted a suspension at all, much less a five-year suspension, for just a technicality, an honest mistake during a very emotional time.”

Yet the ban followed a track record of McNeal missing these tests. Four years ago, she received a year-long ban for missing three tests in a 12-month period. Gabbi Cunningham, who finished fourth in qualifiers, replaced McNeal.

Though perhaps inadvertently, Fraser-Pryce and Felix exemplify pro-life values that transcend their vocation. Instead of terminating their pregnancies to extend the trajectory of their track careers, they bravely faced the challenge head on, all while benefiting from the fulfillment of motherhood.