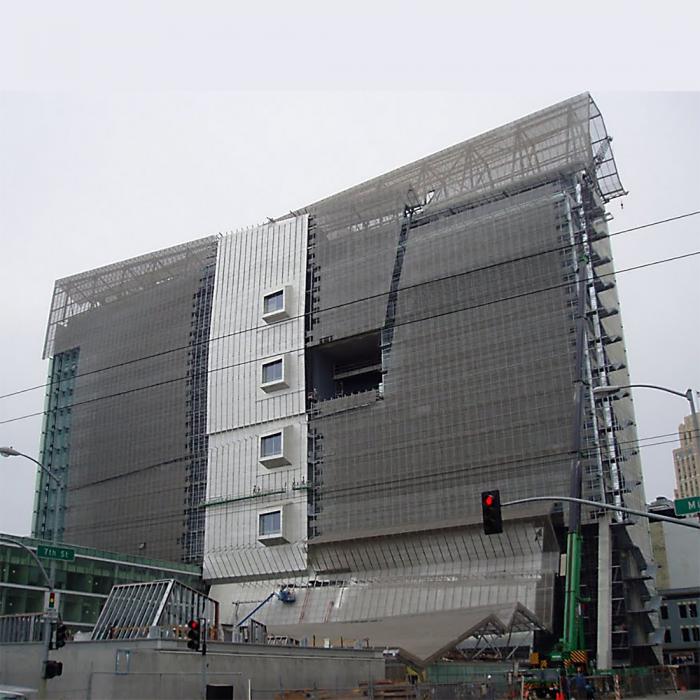 If you’re ever walking around the Mid-Market area of downtown San Francisco and take your gaze off the ground (where you’re probably trying to navigate around homeless people’s poop piles), you’ll be stunned by a hulking, 18-story monstrosity that unfolds before your very eyes. It’s the San Francisco Federal Building at 7th and Mission Street.

Built in 2003, this $144-million environmentally friendly “low-energy” building was described by the San Francisco Chronicle’s architect critic, John King, as architecture at its “provocative best.” One need not be a philistine, however, to realize that few observers would still share his enthusiasm — perhaps not even King himself, who admitted in 2017 that it failed to live up to its hype.

The building is as hard to describe as it is to look at. There’s a steel exoskeleton and bay windows that pop out like bulging eyes. It’s an unfinished-looking jumble that peers out over a sterile courtyard — and one that reportedly functions poorly for the bureaucrats who are stuck working there. If the next Big One hits the City by the Bay, and this building collapsed in its wake (provided no one were in it or near it, of course), few people would miss it.

It’s the kind of building that encouraged the president to draft an executive order that mandates neoclassical architecture for all major federal building projects. In fact, the draft memo referred specifically to it as an example of bad architecture. Like some of the president’s edicts, however, this one is more about emotional effect than sound policy. (We need to build temples of democracy rather than let “elitists” build modern oddities, Trump says.)

During the Obama presidency, my conservative friends complained frequently and loudly — and correctly — about the authoritarian nature of presidents who governed by executive order. Then after Donald Trump became president, they defended his executive orders by saying that they merely undid Obama’s past orders. Now they are far down the road of defending such orders as long as they advance policy aims to which they agree.

Sorry, but the design of federal buildings should not be driven by the taste of the president, whatever one thinks of Trump’s gilded New York City apartment — or whatever style a more tasteful future president might embrace. Would we want, say, a President Bernie Sanders to issue an executive order mandating that federal buildings be built in the Soviet brutalist style, which would more aptly capture his style of politics?

Federal building design has been guided since 1962 by a set of principles that eschewed an official style and allowed great latitude for local preferences. Like all federal guidelines, they often don’t work out as planned, even if they were perfectly reasonable. Those rules, crafted by former Sen. Daniel Patrick Moynihan of New York, required buildings to portray “the dignity, enterprise, vigor and stability of the American government.” Some federal buildings, including modern ones, are lovely. Many that I’ve seen are awful, though.

The plethora of bad architecture has little to do with those guidelines — or the particular style that the planners have embraced. For instance, the Trump directive praises the Tuscaloosa Federal Building and Courthouse in Alabama. It’s basically a sprawling faux Greek temple, covered in columns, that isn’t any more approachable than those concrete Soviet-era buildings that are meant to intimidate and frighten the public into obedience.

Greco-Roman facades are fine enough, I suppose, but we shouldn’t pretend that they’re emblematic of our high-minded republic. One need only wander around Washington, D.C., to see block after block of giant, hulking boxes that are home to superfluous bureaucracies that regulate the heck out of us. They often are clad with columns, half columns, marble façades, and other fussy claptrap and often aren’t any prettier than that Mission Street debacle — although they’re hideous in a more traditional way.

The problem isn’t the façade but what’s done inside those structures. We have far too many federal buildings, built at excessively high costs with little concern about the taxpayer dollar. Yes, the American Institute of Architects was right when it explained that in our pluralistic society, architecture should reflect the “specific communities that it serves, reflecting our rich nation’s diverse places, thought, culture and climates.”

In a self-governing society, the selection process should indeed default to local control — even if the locals in wacky San Francisco choose a building that looks like it was lifted out of the scrapyard. The president also is right that architecture says much about the nature of our government. That’s why I don’t mind (and always expect) hideous-looking federal buildings — and even appreciate the soul-crushing look of those Eastern bloc high rises.

That’s because those buildings suggest the actual — rather than mythical — relationship between government and the people. Like the San Francisco Federal Building, the federal government itself is huge, unattractive, poorly functioning, illogical, and designed to intimidate, and it always fails to live up to its promises. Quite frankly, slapping lovely columns on the entryway doesn’t soften the blow.